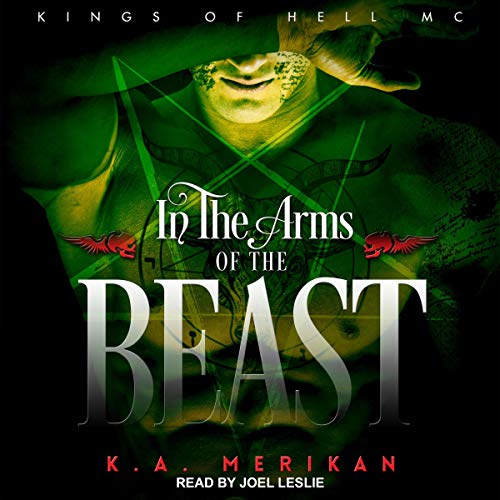 In the Arms of the Beast

Laurent: Time traveler. Devoted husband. Stubborn as the devil himself.

Beast: Kings of Hell MC president. Will stop at nothing to protect his family.

After everything Baal put them through, neither Laurent nor Beast considered ever making another pact with a demon, but in the spur of the moment, temptation becomes too great, and they decide on one more deal.

This time, with Mr. Magpie.

But the gift might prove to be more than they can handle. The danger to the human world has already strained their relationship, but Magpie's offering brings out the worst in both Laurent and Beast. Confronted with each other's flaws, they need to decide if, despite all they've been through together, perhaps they're just not meant to be.

With the world on the brink of collapse, and their pact binding them in new and unexpected ways, they have to put their differences aside to stand a chance at saving their family.

What listeners say about In the Arms of the Beast

I love this whole series, even more so with Joel as the Narrator. Great job folks totally enjoyable experience.

Wonderful ending to this series

I have not found a book by KA Merikan that I haven’t liked. I can never tell where the stories are going which is so refreshing. It doesn't have as much sexy times as the other books but it was still good. Joel Leslie's narration and accents are so good. It was a great ending to this series.

A fantastical conclusion of one of the best LGBT dark paranormal fantasy.

KA Merikan knows how to write dark fiction. I love these authors. I listened to all their audiobooks available on audible. Not one of the books was a disappointment. Listening to this series was one hell of an emotional ride. The characters and the worldbuilding is absolutely colourful and dark at once. The balance between good and evil is solid, but the lines soon get blurred. I was emotionally invested with all the characters, since book 1 until book 5. I am truly able to re-listen to them in a year or so.

Book 5 is all about Laurent and his husband Beast. Beast is the Kings of Hell MC president. I don't want to give too much away and spoil the nerve wrecking adventures of the Kings of Hell while they try everything in their power to stop Baal from breaking through the crust of the earth. We get to know Magpie on a more personal level. He gives Laurent and Beast an egg which is the center from which the plot sprang to life.
I frustrated by Laurent and almost hated him for treating Beast badly and for being selfish with his own needs. They have lots of drama while the world is literally coming to an end. Their love for each other survives the test and they realize they are stronger together and to trust each other.
I loved the whole series' book covers. Its original and fits the characters and world inside.
I did not have to listen to the audio sample, because I know Joel Leslie and I knew the book will be great because I have listened to the previous 4.

Narrator: Joels' performance was excellent! The action and all the emotions sucked me in and I felt a connection. It was FUNNY, HAPPY, SAD, EMOTIONAL, CONFUSING, IRRITATING, ANXIOUS and of course very sexy.
I recommend this book to anyone who likes dark, sexy, paranormal, motorcycle criminals with almost good hearts.

End of a phenomenal series 😥

Wow, my mind is still reeling from the ending! Laurent and Beast had their share of the back and forth power play during the book but Laurent came around and swallowed his pride when he realized they were running out of time to be together before the world came to an end. Magpie performed a favor for Laurent and Beast and afterwards he just made himself at home at wouldn't leave. I've had my reservations regarding Magpie from the beginning but he truly showed his true colors during this book.
I have to say I was SHOCKED 😱 at some of the things that happened in the last chapter and during one scene I was ugly crying😭 because bravery of one of characters.
I waited for the last audio to come out because I really enjoyed 🤩 the narrator Joel Leslie.

I absolutely loved this series! I also enjoyed the author fast forwarding at the end of the book for us, this will be on my shelve for re-reading/audio in the future.

I love how it's don't judge I or should I say that you don't judge a person by their looks. Each individual couple weather be Beast, Laurent Knight ,Elliott and Jack and Vars as well as Gray and Shadow. And if you've gotten to the rape you person of the story four epilogue are amazing kinda want to see what happens with the next generation. side note loved Magpie. my favorite would love to see.him .

Amazing way to end a series =)

Loved this whole series, so I'm very satisfied how this wrapped up.

Thank you for this great story, I loved seeing all these characters grow, it was magical.

The best series EVER!

This series was the best thing I have ever read. Delightful, sexy as hell, and addictive!

The characters are so vivid that I'm going to miss them now that I've finished the series. A bunch of very naughty, bad men who truly enjoy the full range of sexual acts. It's a wonderful fantasy that truly comes to life.. You're sure to get wet and that's the piquancy of it all. Bravo, bravo, bravo to narrator, Joel Leslie.

Great storyline, hope there is a sequel. took me through a myriad of emotions. enjoyed every moment. hayes for it to end.

I was hoping for so much more.

I don't think I've ever grown to dislike a character as quickly and deeply as I have Lauren. So desperate needy, reactionary, and clueless all at once. Over all this was the weakest book of the series, there was so much potential in the culmination of the existing story arcs it's a shame the authors decided to make Beast and Lauren parents.