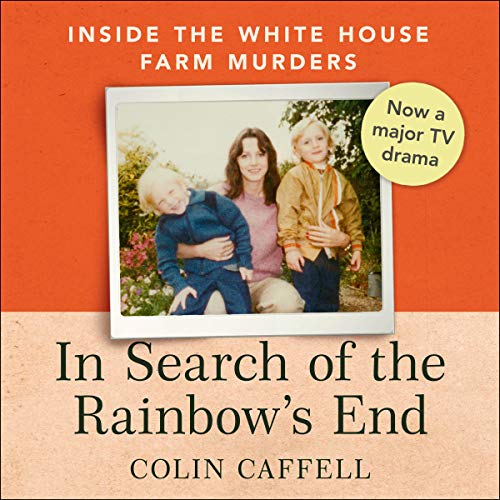 In Search of the Rainbow's End

By: Colin Caffell
Narrated by: David Morely Hale
Try for £0.00

In 1985, the shocking murder of a family of five in a quiet country house in Essex rocked the nation.

The victims were Nevill and June Bamber; their adopted daughter Sheila Caffell, divorced from her husband Colin; and Sheila and Colin's twin sons, Nicholas and Daniel. Only one survivor remained: the Bambers' other adopted child, Jeremy Bamber. Following his lead, the police - and later the press - blamed the murders on Sheila, who, so the story went, then committed suicide.

Written by Sheila's ex-husband, Colin, and originally published in 1994, In Search of the Rainbow's End is the first and only book about the White House Farm murders to have been written by a family member. It is the inside story of two families into whose midst the most monstrous events erupted. When Jeremy Bamber is later convicted on all five counts of murder, Colin is left to pick up the pieces of his life after not only burying his ex-wife, two children and parents-in-law but also having to cope with memories of Sheila almost shattered by a predatory press hungry for stories of sex, drugs and the high life.

Colin's tale is not just a rare insider's picture of murder but testimony to the strength and resilience of one man in search of healing after trauma: he describes his process of recovery, a process that led to his working in prisons, helping to rehabilitate, among others, convicted murderers.

By turns emotive, terrifying and inspiring, Colin Caffell's account of mass murder and its aftermath will not fail to move and astonish.

What listeners say about In Search of the Rainbow's End

Have never written a review before but this book is one of the most inspiring things I’ve ever read. The author gives such an honest insight into his journey it’s impossible not to feel his heartbreak at times. Some difficult parts to hear, obviously- and the tears flowed. Have watched the recent tv series and read Carol Ann’s excellent account of the tragedy as well, but the later chapters in Cafell’s book are all anyone needs to hear to be under no illusion that ‘that man’ must never be released from prison

Unusual perspective on a difficult subject

The book gives a lot of detail on the White House Farm murders, told from the perspective of the ex husband of one of the murder victims. This book seemed very "new age", as it described the issues dealt with and overcome by a man who had a close involvement with a murder case. It talks a good deal about his feelings of guilt and responsibility, and how he has been able to resolve within himself how he feels about what happened to his ex wife, her parents, and his two sons. Colin Caffell became very caught up with finding mediums who could help him find out about his family's fate, and this does not make for comfortable reading if you find the idea of an afterlife or spiritual sphere hard to credit. There is a lot of use of terms such as spiritual journey, discovery and healing, which I guess are terms which were used a lot by members of the more "alternative community" at the time the book was written, and which might not sit so comfortably if you are used to taking a cynical view of things which are hard if not impossible to prove I found it a shame that the narrator had a northern English accent, as the author is from London, and I felt it would have been easier to relate to the story if the narrator's accent was similar to the writer's. I also felt the narrator's choice of when and how to pause in the narrative was a little intrusive into the narrative flow.

In what feels like a very honest account of a tragic and at times almost unbelievable event, Colin opens his heart to reflect on his trauma and ongoing recovery. I listened whilst out walking which was a mistake, I found myself in my local park with tears pouring out of my face as I listened to Colin recall his experiences. Drawing on notes that he kept at the time, the first part of the book recounts the events respectfully despite Colin clearly having felt anger towards Sheila’s parents and Jeremy. The writers compassion for those who have wronged him is remarkable and at times telling of his need to be accepted. Colin has a respect for the supernatural and so I felt that the middle of the book became less factual and more spiritual which was a nice mix but sometimes difficult for me to connect with. The last few chapters are added later and consider the impact of the events on his current family despite the events happening so many years ago. It’s disgraceful that Jeremy is still able to have an effect on Colin’s life now. The justice system needs an overhaul!

A really good book. A fascinating insight into a tragic event and how Colin Caffell dealt with the aftermath. How sad it is that the British press are such vile 'things', devoid of all humanity!

Beautifully written. Narrator is a tiny bit OTT but I am very picky. Amazing legacy.

Enjoyed it but could have been 3 hours shorter

Enjoyed it but it could have been 3 hours shorter. Sad story. Such courage