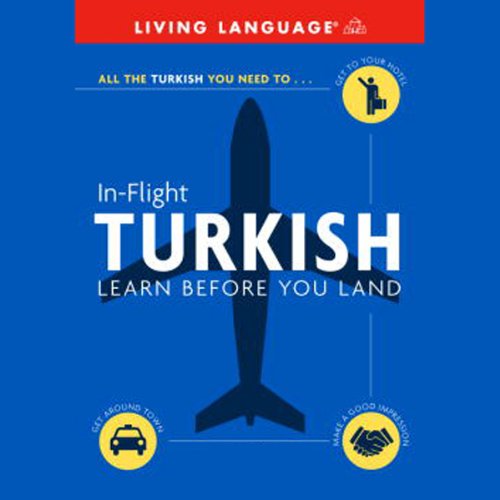 Wondering how to make use of all that spare time on the plane while you're flying to Istanbul or Ankara? Between your in-flight meal and your in-flight movie, try some In-Flight Turkish! This 60-minute program is the simplest way to learn just enough Turkish to get through anything you'll run into, whether you're traveling for business or for pleasure. Short lessons make In-Flight Turkish easy to use.
©2001 Living Language, a Random House Company (P)2001 Living Language, a Random House Company

These in-flight courses are worth the little effort it takes to engage with them and are actually a great distraction on flights, short or long. You will not learn a language this way but you will benefit from feeling your ear attune to what you will hear when you land. My experience is that most people appreciate any attempt at speaking their language when you are in their country. Being polite and trying usually results in a better trip and treatment. You will be glad you did it. Happy trails!

I have a territory of 85 countries and so I have a lot of language books. I am however based in Turkey but am an expat so I gave this one a try. It is horrible, its almost like someone who knows nothing about language books picked up a few Turkish words and a mircrophone. What makes it so bad? Well for starters they speak in English SLOWER than they do in Turkish. They speak English at a slightly slower than normal speaking pace, but then when the revert to Turkish they speak as fast as they can making it nearly impossible for newbies (I know a bit of Turkish and its difficult for me!) to hear the proper pronounciations. At best you could recognize it again when someone else says it, but after this book there is absolutely no hope of speaking yourself and having anyone understand anything you say. You'll have a better chance speaking English, and English is not widespread in Turkey.

To make it worse, they don't pause between Turkish words so the listener has no idea what is a phrase and what is a word. The words are not repeated but simply thrown at you.

Within the first five minutes they have already progressed to full sentences, again with no pausing between words or slowing down. In fact I find in this book the Turkish is spoken at a rate faster than they Turks themselves speak in public!

Horrible stuff - too bad Pimsler Turkish does not appear to be on audible, the Pimsler language books are excellent.

Not bad for a start

You'll never learn enough Turkish to survive in Turkey in just an hour or two. But listening to this will help familiarize you with the sound of the language and (if you're lucky) give you a few basic words. It would help to have a written script for those of us who are visual learners, and it would help to have the words repeated once or twice. Make sure you listen with good-quality headphones in a quiet place to get the nuances of pronunciation. Get this a couple of months before you come to Turkey and you might have a fighting chance/