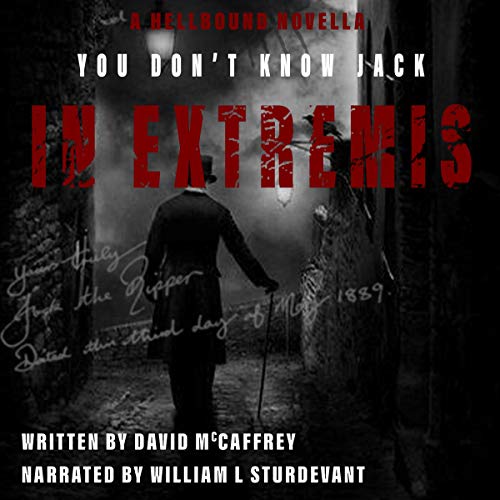 James Maybrick had secured his legacy as the most infamous serial killer of all time...his diary would one day shock the world.

Thomas Quinn wants revenge...his actions will give birth to an organization of unspeakable power.

Together, they unwittingly set in motion a plan that will one day lead to the serial killer, Obadiah Stark.

They were The Brethren.

Maybrick is known to history by another name....

What listeners say about In Extremis

This was a very interesting listen for many reasons. One being who was Jack the Ripper, many have come to their own conclusion as has this author. After listening to this I was unsure if this was fact or fiction. I did my own research into James Maybrick and have found this story is fact as to what some people believed where others say it is untrue. I thought this author did a wonderful job of writing this amazing side to what could very well be true. If this is true it would explain a lot of things that have been left unexplained for many years. I will let you be the judge and decided for yourself. This is defiantly one story you do not want to miss either in the book or in audio. I have to say I enjoyed the audio and it added so much to the story.

Mr. Sturdevant did an outstanding job with this audio from his wonderful accents which make this a more believable listen to his wonderful character voices. I have listened to other samples of this narrator’s work you really have to listen to compare just what a wonderful narrator this man is, I would never have thought they were the same person. Mr. Sturdevant has a very clear and pleasant voice that is easy to listen to. His character voices are clean, clear and crisp. His tones are even you never have trouble understanding who is talking or what they are feeling. His male voices are as pleasant as his female ones. There are no background noises I do believe there was one place where he repeated a few words but in no way does it take away from the audio it is noticeable. It would be my guess this was when he took a break however if any other breaks were taken you could not tell. There is no doubt Mr. Sturdevant took time in planning how to work this audio. He really adds a lot to the story giving a very vivid picture of what the author has written. At times I felt like I was in the room watching the acts James was doing. I have no trouble believing this was anything but a nonfiction story with the way he gave the audio a life of its own. I am looking forward to listening to more of this narrators work.

True Crime and Serial Killers are my true reading passion. I was totally into this story even though after my research some say this is all made up. I have no trouble believing this could be very well true and James could be Jack the Ripper. Whether or not the story of the diary of James and his so called writing inside a watch is true this is one author that will show you a side of James few have seen or even know about. This is well worth the listen I totally enjoyed the narrator and the author side of James aka Jack the Ripper. I will let you decide if you are a believer or not. This is one audio you do not want to miss. As you will see this author that did his research giving you a compelling story why giving life to a story that pulls you in and never lets you go. I really hated for this story to end.