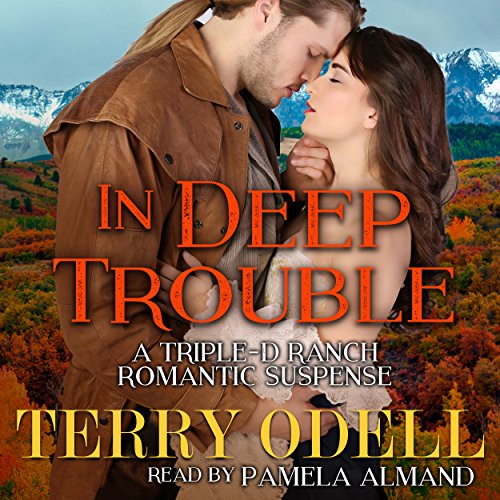 She trusts everyone. He trusts no one.

In her job as a Sheriff's Department dispatcher, Cecily Cooper sees plenty of people who could use a second chance. She's created a program to give the less advantaged a fresh start, and thinks her brother's Colorado cattle ranch will be the perfect spot for her project. Some responsibility and a touch of physical labor will help these people find an alternative to life on the streets.

Bryce Barrett, ex-Army Ranger, now turned cowboy on the Triple-D Ranch, prefers animals to people. People have agendas. Animals don't. It's one reason he and Cecily are always on-again, off-again in the romance department.

When 17-year-old Grady Fenton is chosen as the first candidate for Cecily's program, Cecily is thrilled. Bryce not so much, especially when his boss assigns him to be Grady's mentor. Can Bryce convince Cecily there's more to Grady than typical teenage angst? Or is he reading more into the boy's behavior than is really there? When someone is killing cattle across the state, the Triple-D's herd is no exception. Does Grady have answers? Sparks fly when Bryce and Cecily must put aside their differences long enough to discover what Grady is hiding. Soon things escalate, and it's not just the cattle in danger.

In Deep Trouble follows Bryce and Cecily, introduced in In Hot Water, book one of the Triple-D Ranch series.

Triple-D cowboys and their ladies rock!

Yes, the cowboys are all great-looking (at least they sound like they are!) and the women are all individual personalities and interesting romance and suspense

What does Pamela Almand bring to the story that you wouldn’t experience if you just read the book?

She makes you see and hear the cowboys and other characters which adds another dimension to a story. Plus you can listen with your eyes closed.Sexy cowboys need a deep sexy voice for a narrator. I have listened to the other book in this series In Hot Water and will look for more from this reader and this author.

Another good one from Terry and Pamela

Would you listen to In Deep Trouble again? Why?

Bryce is so low-key and his slow deep voice is a turnon!

Her voices are distinct and suited to each person. They are not way over the top and keep it interesting. You never know what's coming and you can sure feel each chapter build up. I will listen to some of her other audiobooks in the future.


Cecily Cooper is a dispatcher for the Sheriffs Department. She knows all to well of the angst in peoples lives. She has decided to open a pilot program on her brother Derrick's ranch called Healing With Horses. She wants to give deserving people a second chance. She feels that some hard work and responsibility will help turn lives around.

Her first client is 17 year old Grady. Grady has been arrested for shoplifting and is a runaway. He's super smart but doesn't want people to know. He loves to read as well. He has had a rough life. Mom has brought home countless men home until it was almost a revolving door of men. Mom finally married one, yep he has money but he is also a child molester. When Grady turned 17 he ran away. After being arrested his social worker signs him up for Cecily's program. Reluctantly he goes.

Bryce Barrett is an Ex- Army Ranger who is a hand at the ranch. He prefers the animals to people but he has a thing for Cecily. It's ore of a love hate relationship though. To his grief Bryce is put in charge of Grady. Being as Grady knows nothing about horses or ranch life Bryce has his work cut out for him.

All is going pretty good until they start finding mutilated cows on the ranch. After they catch the cow killer, Grady goes missing. Trying to find out if Grady just ran away or if he was taken. Cecily and the gang decide to take it upon themselves to find Grady which proves to be dangerous when she is also kidnapped.

I really enjoyed this book. It has some romance, some mystery, and some danger. All things I enjoy in a book. There is very little strong language and actually only 2 hot sex scenes and 1 of the 2 are interrupted.

Pamela Almand has done a great job narrating. She carries the story through very well. She lets you feel the emotions portrayed in the book with her voice. She does a great job with the voices for each character as well.

Would you listen to In Deep Trouble again? Why?

I don't listen to anything more than once

Grady...tough kid trying to get out of a bad situation and straighten out his life

What does Pamela Almand bring to the story that you wouldn’t experience if you just read the book?

You can picture each of the people in the book and there's a real bonding made by the narrator's use of different voices and personalities.

Enjoyable and kept me listening