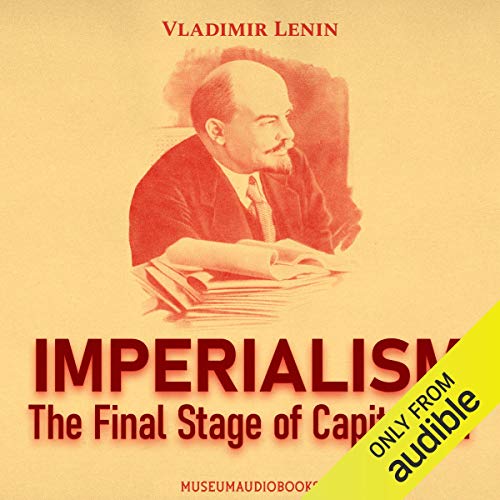 Imperialism: The Final Stage of Capitalism

By: Vladimir Lenin
Narrated by: Michael Richards
Try for £0.00

Vladimir Lenin’s 1916 essay "Imperialism: The Highest Stage of Capitalism", is a synthesis of Lenin's development of economic theories that Karl Marx formulated in Das Kapital. It attempts to account for the increasing importance of the global market in the 20th century. Lenin contends that colonialism and the First World War were the consequences of the global spread of the capitalist economy.

In the course of colonizing undeveloped countries, the Germans, British, French, and Russian empires would eventually clash over the economic exploitation of large portions of the globe. He argues that, in the capitalist homeland, the profits generated by the exploitation of colonies allow the business class to bribe native politicians, labor leaders, and the labor aristocracy in order to avoid worker revolts.

What listeners say about Imperialism: The Final Stage of Capitalism

Enlightening for fans of Lenin's analyses

While not as strong as The State and Revolution in overall style, Lenin gives an enlightening breakdown of the means by which capitalism progresses and consumes as part of its cycle of development. I would list this as a must-read for those interested in theory, but if you're not that mathematically oriented you might glaze over the large amounts of statistical data.

Most compelling about this piece is how relevant it still is to the modern day. Though the labor wars of the early 20th century did dilate the timescales by which many major communist writers predicted socialist revolution would come about, the forces which animate capitalism continue to function up to the present. Namely, the fact by which corporations in their compulsive need for profit will grow, subsume or otherwise merge with each other, and become deeply intertwined with finance over the actual production or distribution of goods as a means of maintaining profit margins. This leads to the imperialist state of things, where corporations must seek out new wells of exploitation to prolong their ultimately unsustainable MOs.

This work actually makes for a good "sequel" of sorts to Engels' Socialism: Utopian and Scientific, where Engels outlines the material forces by which capitalism came into the world, and Lenin shows how those forces continue to develop with the compounding effects of time.

Used for a Poly Sci class

I listened to this book while taking notes in a physical copy of the book which I think enhanced what was being presented. Although, there are a large amount of things I disagree with Lenin on, his argument is very detailed and interesting. If you are a international relations, political science, or public policy major I recommend reading this book. Or if you are simply just interested in the state of the world through a look in the past. The person who read this book spoke clearly and pronounced everything perfectly.