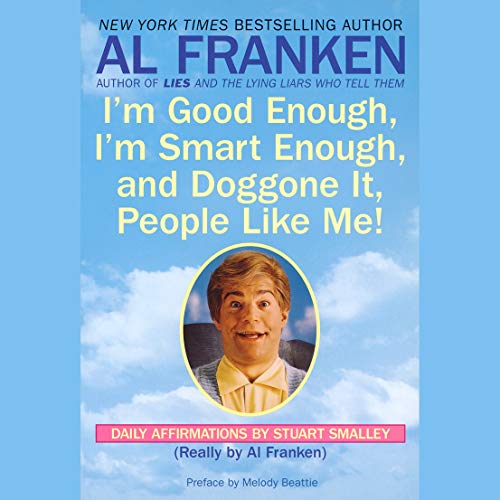 I'm Good Enough, I'm Smart Enough, and Doggone It, People Like Me!

I'm Good Enough, I'm Smart Enough, and Doggone It, People Like Me!

Al Franken's wonderfully pitiful alter-ego, Stuart Smalley, explodes the world of touchy-feely self-help gurus (some of whom you can also listen to from Audible!) in this short but undeniably sweet diatribe. Franken strikes a perfect balance between clever and stupid in a manner that has universal appeal and it's amazing that he reads all of this with tongue firmly planted in cheek. You and your inferiority complex will never be the same! (Jonathan, Director of Public Relations)

You're going to take a healing journey, and it's going to be great! Unless it's a disaster....

From Stuart Smalley come guided visualizations that will take you to a safe and healing place...except for a few wrong turns along the way. (Stuart made a solemn vow not to edit anything he recorded because he is a perfectionist - that's his problem, but he's owning the problem, and that's okay - and he realized that if he started editing the audio he would never finish it.)

So even if some of the parts aren't exactly what Stuart wanted (because human beings aren't perfect, and that's okay), sit back and take a journey down the River of Life and into the Dysfunctional Forest - a dark and scary place where you'll meet Grandiose Bear, Overcommitted Opossum, Sex-aholic Squirrel, and a beautiful little child - a child who looks a lot like...you. Plus, you'll hear Stuart's calming visualizations for such stressful times as traffic jams and holidays. So close your eyes. Relax. You're in good hands. Stuart Smalley is a caring nurturer, a member of several 12-step programs, but not a licensed therapist.

Al Franken wants everyone to know that he really created Stuart and played him on Saturday Night Live, and that he wrote and performed this program.

Warning: Do not close eyes while driving a motor vehicle.

Best Prank Audiobk EVER. Play THIS IN THE CAR!

Not only is this great comedy, but it was designed with the conceits of the audiobook listener in mind. You MUST play this in the car, while you're driving, for full impact of the punchline. I just love it, I love Stuart Smalley, and I love Al Franken. I'm so mad he's in the Senate now and can't do a sequel!

Loved it! I know he is a Senator now, but he should seriously consider resurrecting this character.

I laughed my head off. And made the mistake of trying to listen to a meditation audiobook later on. I could not stop laughing. Franken has hit the nail on the head here.

For those who don't like his politics... forget that stuff, this is just a good time with his Stuart Smalley character. I liked how he worked the audio presentation into the presentation. It wasn't just Franken reading from his book.

Whoops -- I am misleading you

I wrote the other review -- but then I listened to the clip and I realize that this even though this audiobook has the same name as the book-book Al Franken wrote, the audiobook is a completely different product.

I love the book-book, and the movie, and this audiobook is more like "an hour with Stuart Smalley" -- and from the clip you can tell that it is very very funny!

Behind the Scenes Look of an Audiobook Production

Very funny product. The audiobook features Franken as his Stuart Smalley character in the recording studio trying to do the audiobook version of his Stuart Smalley book. What makes it quite amusing is that this is being done in "one take" and Stuart can't seem to get it right. The first 30 minutes are golden, but the tape does drag at the end (the one joke concept does hit its limit). Overall its very enjoyable, even if you're not a fan of Franken's political ideology.

I suppose you have to like this humor but if you do, you'll laugh continuously. Al Franken's spoof on the self-help industry is priceless. I can listen to it over and over again.

If you like Will & Grace you will love this audio. Envision "Jack" reading a guided visualization. It is truly amusing. I had never heard of this author, but am glad I got to hear this. It was a great pick-me-up for a rainy afternoon. If you are looking for a series of serious, relaxing visualizations, this is not the tape you want. If you are into relaxation tapes and are ready for an amusing break from routine, grab this one up!!

I don't know how many times I've listened to this but it gets better every time. Al franken's ability to encapsulate the experience of program in all shapes and forms is just outstanding. I am so happy about this purchase.

This is NOT the audiobook of the actual book. There was originally a "meditation tape by Stuart Smalley" that went with the book, and I assume this is it.

If you like Al Franken's Stuart Smalley character from SNL, and/or have ever known a self-help fanatic or 12-step-program abuser, you'll enjoy this.

So fun, I loved this!!! Silly, but when you think about it, it's very smart humor.