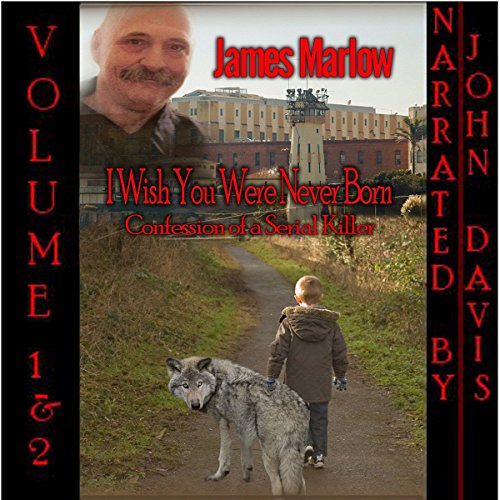 I Wish You Were Never Born

An ex-con dubbed "The Folsom Wolf," James Marlow persuades his girlfriend, Cynthia Coffman, to travel across the country torturing, raping, and killing young women. But was James really the one who was controlled by Cynthia to carry out her master plan? Find the truth in this tell all!

Written By A Condemned Man: I am a prisoner in San Quentin on Death Row. I love writing books as it passes the time in this dark place! I love writing poetry and am told that I am very good at it! There have been books written about me and they don't seem to tell the real story, so I wrote about it myself.

There is also a show about me on Wicked Attractions under "The Folsom Wolf," but still that is Hollywood making it a bit more than what the truth actually is! This is the REAL story behind the murders and my life written by me, James Gregory Marlow.

As an adult, Marlow tended to develop relationships with women like his mother. He used drugs and was often sexually promiscuous, living the same sort of unstable life he had been exposed to as a child. From 1980 to 1983, Marlow was incarcerated in prison for his robbery convictions. From the time of his release until he met Coffman, he had no arrests, successfully completed parole, and held jobs. He married a woman named Josie. The marriage ended when she shot another woman in a bar after she and Marlow had a misunderstanding. Not long after, Marlow met Coffman, with whom he fell in love because she immediately reminded him of his mother. He was willing to do anything to make her happy. After they killed a man in North Carolina, Coffman threatened to call the police if Marlow did not do her bidding. As a result, Marlow felt trapped. Coffman wanted to acquire funds, or have her in-laws killed to get her son back. The Orange County and San Bernardino County murders of two more women were the product of Coffman's desire for money, and Marlow's attempt, by doing what she wanted, to please Coffman and avoid abandonment. Dr. Kentia opined that the crimes would not have happened had Mr. Marlow not met Coffman. After the second murder, killing Ms. Hudson, Cynthia Coffman was hired to kill “a pregnant woman” in Arizona. However, Marlow grew tired of the situation and of Coffman's out of control behavior, and essentially gave up, purposefully discarding evidence in a way likely to lead the police to Coffman and himself.

What listeners say about I Wish You Were Never Born

Not Worth the Time or the Money

What disappointed you about I Wish You Were Never Born?

The storyline was really lacking in substance and honesty.

Would you ever listen to anything by James Gregory Marlow again?

No, I found him to be less than honest, truly mentally ill and tiresome.

I liked that it was self written.

I wish you were never born

Nobody, it was so poorly written and so hard to believe any of it. The author wrote as if he were a poor innocent in it all.

Not sure yet, I'll have to look through the library

Would you listen to another book narrated by John David?

Yes, he reads well, I just didn't enjoy this book at all.

If you could play editor, what scene or scenes would you have cut from I Wish You Were Never Born?

Everything, it was so bad I couldn't even listen to the end - something I almost never do.

This man has written in this book things, that if true, are very Very disturbing. However, as you very well know, the gall of a review is not to judge the sayings of the author but to persuade fellow listeners to buy or not to buy. In my opinion, the allegations made in this book are worth listening to whether they are true or falls. To be a bit more specific without spoiling the book, i will tell you that the facts given by the author do not concern the prison system and could altogether alter the course of humanity it self. Do you think i am exaggerating? Come on guys, buy it! it's only 2:30 hours long and costs $5.60, it is value for money. Besides, i am very curious to see your reviews and ratings.

PS. I hope i have persuaded you to buy