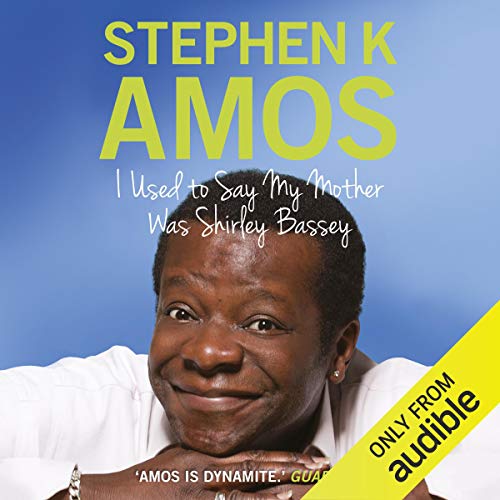 I Used to Say My Mother Was Shirley Bassey

Growing up in a large Nigerian family in South London, Stephen K. Amos learnt early on to find the humour in every situation. Raised by his parents and extended family of 'aunts' and 'uncles', I Used to Say My Mother was Shirley Bassey tells the story of Stephen's chaotic upbringing in the carnival atmosphere of the late '70s and early '80s.

Stephen describes his awkward beginnings as the only black kid in his class, where he told everyone his mum was Shirley Bassey to break the ice. Then, as a middle child in a large family, Stephen learnt stage presence by vying for attention and performing at family parties. Now a world-renowned comedian and performer, regularly selling out venues like the Hammersmith Apollo, Stephen looks back at his earlier life and the incidents which shaped him and continue to inspire his performances.

Poignant, funny, and with the narrative gift Stephen is famous for, I Used to Say My Mother was Shirley Bassey is a memoir of a life fitting in, standing out, and (almost) always laughing.

Oh Stephen, I admire you so much but...

this isn't nice. Your story about your family harassing your downstairs neighbours with noise nuisance until the point that they sold up and left is horrible. Have you ever experienced noise nuisance? Believe me, it's unbearable. Also, your description of people with mental health problems belongs firmly in the 1970's. I've had to stop listening half way through. Shame, as other parts of your memoire are brilliant.

You would think that would be enough of a review but it need to be at least 15 words, so here are extra words

A really good book, well written and funny.
I laughed out loud in places and I know that I’ll listen again. Highly recommended.

Worth it for the James Bond song alone

It’s an interesting and well read book, very much worth a listen. I’m not really the biggest fan of autobiographies, but stand up comics seem to do them better than most and I like Stephen K Amos’ comedy so I thought I’d give it a go.

The book is good from start to finish, but the James Bong song stands out as something special. I keep remembering it and laughing, so for me this book is worth it for that alone.

I lived in Brixton for most of my adult life and know the area well, so it felt really personal. There were so many lol moments whilst being extremely poignant. 'Thank goodness you are a comedian for a minute I thought you were going to say you are gay' It was brilliant, engaging, funny, sad, really well narrated. I'm caring for my mum at her end of life and audio books have become my lifeline. I'm now living in Wiltshire and miss Brixton so much and this book took me there in a heartbeat, thank you. Loved it on so many levels.

Just brilliantly written and spoken. if you haven't seen him live then you're missing out