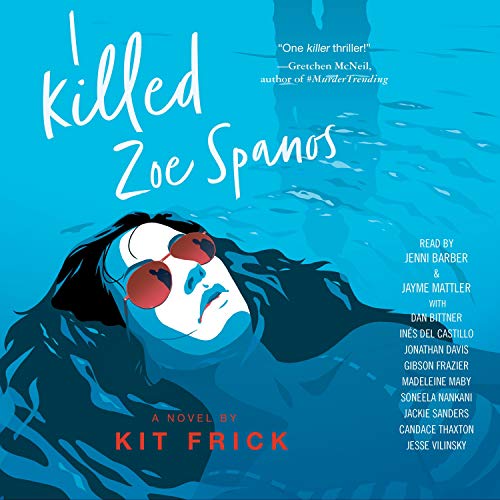 For fans of Sadie and Serial, this “gloriously twisty” (BuzzFeed) thriller follows two teens whose lives become inextricably linked when one confesses to murder and the other becomes determined to uncover the real truth no matter the cost.

When Anna Cicconi arrives to the small Hamptons village of Herron Mills for a summer nanny gig, she has high hopes for a fresh start. What she finds instead is a community on edge after the disappearance of Zoe Spanos, a local girl who has been missing since New Year’s Eve. Anna bears an eerie resemblance to Zoe, and her mere presence in town stirs up still-raw feelings about the unsolved case. As Anna delves deeper into the mystery, stepping further and further into Zoe’s life, she becomes increasingly convinced that she and Zoe are connected — and that she knows what happened to her.

Two months later, Zoe’s body is found in a nearby lake, and Anna is charged with manslaughter. But Anna’s confession is riddled with holes, and Martina Green, teen host of the Missing Zoe podcast, isn’t satisfied. Did Anna really kill Zoe? And if not, can Martina’s podcast uncover the truth?

Inspired by Daphne du Maurier’s Rebecca, Kit Frick weaves an electrifying story of psychological suspense that twists and turns until the final chapter.

What listeners say about I Killed Zoe Spanos

Narrator(s): the narrators did an excellent job voicing their characters, and I love how the podcast episodes featured more voice actors.

Story: For me, it was easy to predict parts of the mystery. However, the story was nonetheless engaging. I do wish there was a bit more description and development in some areas (especially the more rushed scenes and with some side characters), but it’s a minor issue.

All in all, I’m glad I took a chance and spent my credit on this audiobook.

I enjoyed the layout of the book and the creative audio narrative, but the story was lacking. I was hoping for more of a climax or at least white knuckles.

Very clever plot. Different than anything I have read before. It was captivating from beginning to end and the characters came alive.

This book was absolutely incredible. The authors style is so poetic, which is accentuated by the narrators. A work that seems like it was meant to be consumed as an audiobook.

How did this win awards???

The writing really isn’t good. The language is weird, unnatural and convoluted. The plot drowns in floral over the top descriptions. What is the author’s obsession with hair? I love it when characters are brought to life with little quirky descriptions of actions, but this was too much. The whole novel was ‘all talk, little action’. What 17 years old goes into long poetic rants about every little boring detail? None of the characters were realistic and the whole novel felt like a bad drug trip. The main narrator managed to keep an appropriately dull and depressing tone throughout the whole thing, and I kept feeling as is she was about to burst out in tears. In all fairness, I can’t blame her. By the end of this novel I too had lost the will to live

Not great not horrible...I listened to the whole thing and it was entertaining but lacking substance.

I kept wanting to get the end!

I wanted to get to the end not because I wanted to book the end but because I had a pretty good idea about what was going on. I wasn't right on the nose but I was close. The book kept you wanting to keep reading. Was nicely done. The narrator's we're not bad but the recording at some points we're annoying. I will definitely speak out more of this author's books.

The story is relatively well written in terms of use of language. The plot is very far-fetched in that the mother of the protagonist fails to speak up with a family secret to save her daughter from prison when they have a good relationship... and there is almost no reason remaining to keep the secret. The protagonist also has a variety of psychological or psychiatric issues that are incredibly poorly explained, making them seem like a crutch for a poor plot. On the other hand, the character development is reasonably interesting and the characters are multidimensional. I ended up listening to the last 1/3 of the book at 195% of normal speed, but it was marginally worthwhile.

Confusing until you devoutly read it

I will admit, that upon first picking up "I Killed Zoe Spanos", I was very... uninterested in the constant switching of narratives and the time jumps. A lot of it didn't easily make sense to me at first, and I suppose that had to do with reading a book immediately prior to this that was extremely forward in it's story.

About halfway through this book, I kept fidgeting, checking my phone every two seconds as it kept going on and on, and decided to pick up the audiobook - it'd give me something to listen to so I'd stop being distracted by my phone with a book i was having a hard time getting into.

The audiobook helped me TREMENDOUSLY. Not that it was, in the least offensive way possible, some sort of gods sent audiobook, but rather, something that allowed me to focus much better on the words. After about page 175-200, it began to pick up and I had a *million* theories that it could be.

Ultimately, the ending was not at all what i could have imagined.

Overall, this book was incredibly good. If you can dedicate yourself to the hard timeline switches and the narrative switching as well, throughout the entire story, then this is definitely an incredible read. I would pick it up again, if i ever felt like teasing my brain a bit and really read into every single line to see if there had been foreshadowing I had missed.