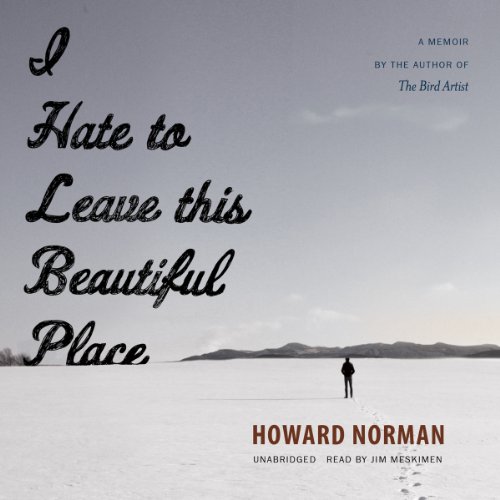 I Hate to Leave This Beautiful Place

By: Howard Norman
Narrated by: Jim Meskimen
Try for £0.00

A memoir of the haunting and redemptive events of the acclaimed writer's life - the betrayal of a con-man father; a murder-suicide in his family's house; the presence of an oyster catcher - each one, as the saying goes, stranger than fiction.

As with many of us, the life of novelist Howard Norman has had its share of incidents of "arresting strangeness." Yet few of us connect these moments, as Norman has done in this spellbinding memoir, to show how life tangles with the psyche to become art. Norman's story begins with a portrait, both harrowing and hilarious, of a Midwest boyhood summer working in a bookmobile, in the shadow of a grifter father and under the erotic tutelageof his brother's girlfriend. His life story continues in places as far-flung as the Arctic, where he spends part of a decade as a translator of Inuit tales - including the story of a soapstone carver turned into a goose whose migration-time lament is, "I hate to leave this beautiful place" - and in his beloved Point Reyes, California, as a student of birds. In the Arctic, he receives news over the radio that "John Lennon was murdered tonight in the city of New York in the USA." And years later, in Washington, DC, another act of deeply felt violence occurs in the form of a murder-suicide when Norman and his wife loan their home to a poet and her young son. Norman's story is also stitched together with moments of uncanny solace. Of life in his Vermont farmhouse Norman writes, "Everything I love most happens most every day."

In the hands of Howard Norman, author of The Bird Artist and What Is Left the Daughter, life's arresting strangenessis made into a profound, creative, and redemptive memoir.

"'I Hate to Leave This Beautiful Place' is a quiet, strong, introspective, patient, expansive memoir, and it benefits from an unusually sensitive delivery by Jim Meskiman, a reader wise enough to avoid the trap of overperformance now endemic to audiobook narrators." (Kyle Minor, Salon)

"Some books celebrate the human condition; others commiserate with us. This memoir does both, and offers fine, subtly fey companionship to boot." ( NPR.org)
"Norman’s tale is conversational, elegant, and full of life…All Norman’s stories – even the last, of a tragedy visited on him and his family, another intimation of death-are related with grace. He shows that the pleasures of the memoir often lie not in a life of dramatic incident but in the flights and transfigurations of a contemplative mind." ( Harper’s)
"Five stellar personal essays by Norman that shed light on his melancholy, tragedy-struck fiction and larger human failures....A bracing, no-nonsense memoir, infused with fresh takes on love, death and human nature." ( Kirkus)

What listeners say about I Hate to Leave This Beautiful Place

Gentle, entertaining look back on a man's life

I enjoyed this gentle, entertaining look back on a man's life. The reader had a perfect voice for this story.