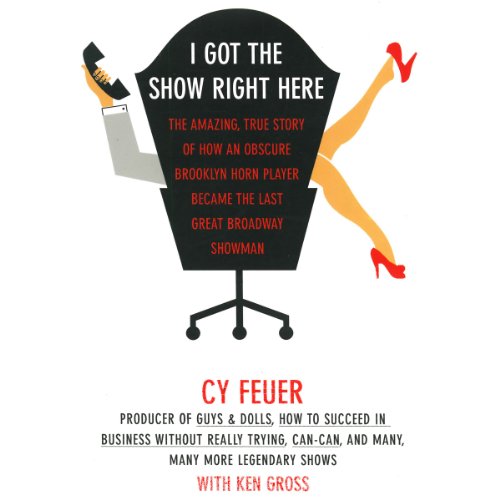 I Got the Show Right Here

For any enthusiast of classic Broadway musicals wanting an insider's look at Broadway's history and the people who made it, Cy Feuer’s funny and touching memoir tells it like it was. Feuer, with Ken Gross, takes us from his humble roots in Flatbush, Brooklyn, to the big-shot Broadway producer he became. The anecdotes from his life are both funny and touching and include a colorful cast of characters. His family, friends, and colleagues include people like Frank Loesser, Bob Fosse, and Cole Porter. Robert Blumenfeld, with an authentic New York accent, reads Feuer’s memories as if they were his own. One can imagine sitting in a comfortable armchair with this Broadway maverick, sipping highballs while he chats about his intriguing, inspiring, and influential life.

Guys & Dolls...The Boyfriend...How to Succeed in Business Without Really Trying...Can-Can... These are just a few of the many Broadway shows produced by the legendary Cy Feuer, who, in partnership with the late Ernest H. Martin, brought to life many of America's most enduring musicals.

Cy Feuer was at the center of these creations, as well as the films based on two of Broadway's most exceptional musicals, Cabaret and A Chorus Line. He was the man in charge, the one responsible for putting everything together, and - almost more important - for holding it together.

Now, at age 92, as Cy Feuer looks back on the remarkable career he had on Broadway and in Hollywood, the stories he has to tell of the people he worked with are fabulously rich and entertaining.

There's Bob Fosse, a perfectionist with whom Feuer did battle over the filming of the movie Cabaret. There's Frank Loesser, the brilliant and explosive composer of Guys & Dolls, Where's Charley?, and How to Succeed... There's Liza Minnelli, star of both the movie Cabaret and the Broadway musical The Act, whose offstage activities threatened to disrupt the show. There's the contentious George S. Kaufman, the librettist and director whose ego was almost as great as his talent.

Add to the list such glamorous figures as Cole Porter, Julie Andrews, Abe Burrows, Gwen Verdon, John Steinbeck, Martin Scorsese, and George Balanchine, and you have a sense of the unbeatable cast of characters who populate this fabulous story of a young trumpet player from Brooklyn who became musical director for the Republic Pictures film studio, then feverishly tackled Broadway, back when "putting on a show" did not require the support of major corporations, and when dreams of overnight success really did have a chance of coming true.

Funny, witty, and immensely entertaining, I Got the Show Right Here is a treat for anyone who loves show business, a story wonderfully told by one of Broadway's greatest and most talented producers.

What listeners say about I Got the Show Right Here

First, the title is a sham. Cy Feuer is not the Last Great Broadway Showman. I think that nod could go to David Merrick or Cameron Mackintosh since they both produced Broadway shows past Feuer and Martin's careers.

The book is interesting in seeing how tenuous producing a Broadway musical can be. What I was longing for, and never got, was what happened with the genesis of such major flops as Whoop-Up!

As this is a personal memoir, one needs to go to other sources to get more information about the shows that Feuer & Martin put on or almost put on. For example, regarding Pipe Dream, Feuer never mentions that Richard Rodgers early on developed an extreme dislike for him which is one reason they were pushed out of the picture. Also, regarding The Music Man, Feuer fails to realize that show he would have produced would probably have not been the same show that Kermit Bloomgarten ultimately produced.

The narration is less than stellar. Mr Blumenfeld tends to rush in parts, slurring his words.

Boy, you should really read this book!

If you are at all interested in the theater, or film, or history, or pastrami, you will love this book so much you will want to call Audible and ask if you can pay more.

In addition to a wonderful story, the narrator gives such a great performance you’ll wonder why anyone would bother with a hard copy. Frankly, I can’t imagine.

My only regret is that I can never again have the joy of discovering this great audiobook, but you can. So what’s keeping you?

An Era and a Genius Revealed

A wonderful book and a thoroughly engrossing tale of some of America's most beloved musicals. Success doesn't come by itself but good fortune and good timing plays it's part when brilliant dedicated people collide and create a masterpiece. What a life. What a contribution.
M. E. R.