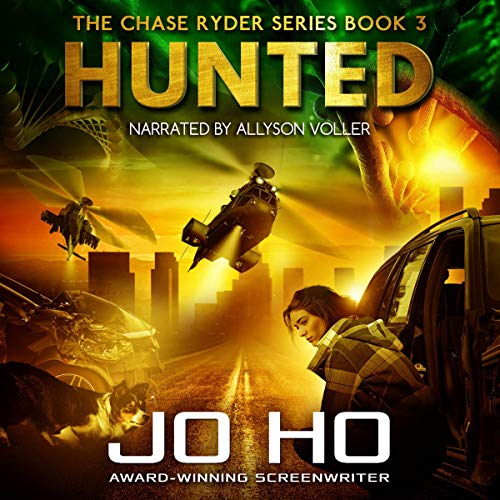 Hear the stunning conclusion in this award-winning series!

Mad scientists, evil mercenaries, and a genetically modified dog. We thought we had survived it all...but the worst was still to come.

Two weeks have passed since Sully and Sam were married, but instead of the happiness they expected when they returned from their honeymoon, they found the unimaginable sitting on the couch.

Before any of us could understand what was happening, we were attacked by a shadowy offshoot of the government, but unlike Forbes' men who had wanted Bandit alive, these were sent to wipe us out. To clean us from existence.

With nothing but the clothes on our back, we fled across the country, our enemy hot on our heels, to the only friend who might be able to help us...when disaster struck.

Driven insane by grief, one of us goes to strike a terrible deal with the enemy that would defy all laws of nature and bring everything crashing down around us. As the others raced to stop them from making a devastating mistake, I headed off to implement a desperate plan of my own - one which would either save us from being hunted, forever...or get us all killed.

If you loved Dean Koontz's Watchers, the Marvel movie Logan, James Patterson's Maximum Ride series, and stories about dogs, you will love the Chase Ryder series.

What listeners say about Hunted

Oh wow you had better hold on tight for this amazing roller coaster of a rider. Warning tissues will be needed, well I needed them anyway, mainly because I got so attached to the characters I couldn't help but tear up. This is a great conclusion to a three book series, well could have done without one bit (still wiping my eyes now) but all three books are excellent and follow on from each other so I would highly recommend that you start with book one and enjoy. I liked the characters and the author cleverly writes in such a way that it is easy to imagine them and you feel what each one is going through. I also liked the way you never know what is going to happen to them next, I certainly didn't see a few things coming in this book. The story is told by a number if characters so you don't miss out on any of the action. With all the break throughs the world is making today the plot line somehow doesn't seem so far fetched. Definitely a book you need to lock your doors and enjoy, I even got my mum hooked on the series. When Sam and Sully return home from there honeymoon it is not quite what they expected. They have a very unexpected guest for one and a very unwelcome one for the other sitting on there couch. Before either one can question there visitor men in black break down there door with guns blazing and so the close knit family is once again on the run. Not knowing who the men are but knowing one thing, that they mean busy Chase and her newly formed family is once again improvising while on the run to keep Bandit safe. But this proves to be harder than it should be with a Sheriff on your team, every turn they make the men in black are not far behind. As tension between the family and there visitor increases things hit crisis point when one of the encounters with the men in black turns deadly and one family member decides to go it alone. The family do better sticking together but is keeping Bandit a secret really the right way to go? This time to keep all the family members safe they might just have to do the unthinkable. I really like Allyson Volker as the narrator, I don't know if it is just because of the books she reads (both the Chase Ryder and Twisted series by Jo Ho) but she is begining to become one of my favourite narrator's, she brings so much emotion and talent to the characters that it is a pleasure to listen too. I was given this free review copy audiobook at my request and have voluntarily left this review.

I was given this free review copy audiobook at my request and have voluntarily left this review. The conclusion of the series kept me on the edge not wanting to stop listening. Allyson Voller is excellent narrating again.

Must Have New Series!!!

I really hope these get made into a tv series or movies! If you haven't read the first two books then you'll want to get them and read them first. I absolutely love this series of has plenty of action and adventure centered around a teenage girl, her medically enhanced super intelligent dog and the secret government agency that is after them. This is the finale of the trilogy and it does not disappoint, there are ups, downs and enough action to make this a very difficult book to put down. The narrator does a fantastic job with each of the characters voices and overall narration that it was so much fun to listen to. As a parent reviewer I would say it's geared for teens and adults but is clean enough for 4th grade and up. There were only a few bad words but no f-bombs, no overly graphic violence and no bedroom scenes. I was given this free review copy audiobook at my request and have voluntarily left this review.

after finding out "Emma" is alive Chase and family are forced to go on the run for their lives. In the end the the truth is reveled and Chase ends up with her happy ending. A series worth reading and/or listening to.

Since I hate spoilers this book is the epitome of what all books should do in a series. The fast paced action continues but there's a noticeable growth in character development. Chase learns some hard lessons and yet keeps her goodness and optimistic outlook.

One Of My Fave Series!!

As much as I hate to see this series end, I have to say it was an epic conclusion. As with the other books in this series Hunted was filled with tons of action, suspense & canine cuteness. The narrator does a fabulous job bringing these characters I have become so invested in to life. I look forward to more from this author & narrator

What would you do to protect your dog?

Reviewer: Teresa Fallen Angel Summary: This series had it all from mad scientists, a fight to overcome seemingly insurmountable odds, and the love between a young woman for her dog Bandit. Now Bandit isn’t your average dog. He was genetically altered to have human intelligence, but that doesn’t change chase’s love for him. Hunted by the government, they stay together until tragedy strikes leaving them reeling from the loss. Decisions are made, but the cost is high as grief takes its toil fracturing the family. Can they survive and what will the cost be? This is an incredible and riveting series taking the reader on their struggle to survive. Chase’s love for Bandit took her from the streets to having a family and in spite of the cost they somehow managed to stay together. I loved this series and it was made that much better to experience it in audiobook format. The narrator brought each character’s unique personality alive for the listeners enjoyment.

And the saga ends.

With Hunted, Jo Ho brings the Chase Ryder series to a close. Overall I really enjoyed the series. I probably mentioned this is my reviews of the previous books, but the constantly being hunted and the inclusion of an highly intelligent dog often made me think of various Dean Koontz novels. While I think the conclusion of the story was fairly satisfying, I have to admit I thought this was the weakest of the trilogy, and truth be told I'm rounding up a bit on the story score. Why is that? A few reasons. First, while the previous books also features quite a few chapters told from the perspective of other characters. in this book I can't honestly say it felt as if Chase was even the main character. While she was present it felt more like she was just along for the ride. And when the series is named after a character, they really should feel like the main characters. Second, this required a higher degree of suspension of disbelief than the previous books. On more than a few occasions I found myself shaking my head and thinking 'no way that happened'. Third, Emma. Aside from really not liking her character, which I'm quite sure is how Ms. Ho wanted us to feel about her, she was just too inconsistent. I can't go into deeper detail on that statement without getting into spoiler territory. But despite these complaints, I enjoyed the entire series, and if you've already ready listened to or read the other books in the series you'll want to see this one through. I was given a free review copy of this audiobook at my request and have voluntarily left this review.

Outstanding Conclusion to a Great Trilogy

This is the last book in the Chase Ryder Series. I would definitely read both previous books before diving into this one. I love this author and her creativity knows no bounds! I really enjoyed the crazy non stop action in this book. The characters are captivating and the dogs are the icing on the cake for me. I could not put it down until the satisfying conclusion. Narration was excellent and brought the story to life. I’m not even a dog person and I absolutely wish Bandit was my dog! There are crazy twists and turns that I did not see coming. It’s a wild rollercoaster ride! I would say this book is not only for children but for anyone who enjoys a great fun filled action packed Sci-Fi/Fantasy series. I absolutely love the way Jo Ho wrapped up this Trilogy. It is even better than What I had expected. I’m really looking forward to Jo Ho next book/series!