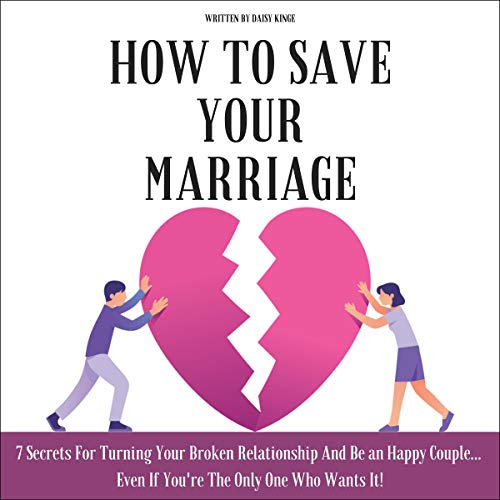 How to Save Your Marriage

7 Secrets for Turning Your Broken Relationship and Be an Happy Couple... Even If You're the Only One Who Wants It!
By: Daisy Kinge
Narrated by: Rex Bennet
Length: 3 hrs and 6 mins
Categories: Health & Personal Development, Relationships & Sexuality
5 out of 5 stars 5.0 (100 ratings)

How to Save Your Marriage

You've no doubt heard of the seven-year itch in marriages? It's more than just an urban legend. Half of all first marriages end in divorce by the time they hit the seven-year anniversary. The truly sad aspect of this is that nothing is apparently learned from the first marriage to the second.

Don't let this happen to you, and don't lose hope! Your marriage can be saved. Follow the seven secrets in this great book and take action to save your marriage today and be a happy couple.

Scroll up and click on the "buy now" button.

An excellent aid for any relationship.

I found this book well worth a listen. An excellent introspective and evaluation of interpersonal skills. My relationship showed signs of improvement before I finished listening the book. I would recommend this book to anyone willing to improve themselves and their relationships.

Thanks author for sharing this audible.

Helps you remember the little things that just slip through the cracks after being married for awhile. The little things are what makes marriage work. Date nights and just plain communication are the necessities.

I really benefited to listen this audible.

This book contains a lot of ideas and ways to show where you might have come up short showing, and also helps teach you the ways to better show them. I would recommend this audio book.

I learned many effective things from this audible.

This audio book has breathed new life into me and given me a strong sense of peace. Marriage is work and that’s okay; the truth that no one tells you is you see the best and worst parts of your partner and yourself and if you can embrace those parts entirely 100% you will make it through. This audio book is a beautiful compilation and a great go to guide.

This audible is a very quick and easy listen.

I found myself genuinely happy after just trying a few things out, I have listen this as more of a proactive step to a healthy relationship and some of the ideas are just wonderful. Thanks author.

A good audio book that has helped me understand.

It has helped me understand a lot about long term relationships and see things from my partner's point of view. I was able to immediate use some of its ideas.

This was a great price for an incredible book

This was a great price for an incredible book that covers, in a very practical way, the problems of communication and relationship that are common to most relationships in conflict.

Good luck to you in your relationship.

Being a psychologist, I may have a bit better insight into relationships than most, but alas, my own marriage did come to an untimely ending. One more thought, the information contained in this audio book is empirically driven, it's not based on one's opinion or hearsay. Good luck to you in your relationship.

Listening this early on would prevent.

This audio book is definitely spoken

This audio book is definitely spoken by men for men, including sports references, however, I also found it insightful, and would not hesitate to recommend this book to any couple dealing with infertility.

If you are staring at the end of your relationship and you want to save it this audiobook will provide you with mindful ways to reconnect with your spouse. My wife and I are still on a bumpy road but at least at this point, we are on it together, before this audiobook she was on her journey and I was on my own.

This is a classic audio book to identifying the pitfall areas that serious couples are prone to fall into as they transition into marriage.

I couldn't even get half way through this ebook with the narrator doing his best William Shatner in Star Trek impression. The unnecessary gaps and pausing in speaking and apparent dyslexia (parcipitants?? I think he meant participants..) make this intolerable. I'm sure the overarching message is good, but don't waste your time or money on this narration and just get the paper copy and read it instead.

The reader is awful. Is it a computer?? Audio cuts in an out. Pissed I spent money on this book, I can’t listen to anymore.

Everything in this audiobook makes sense.

Everything in this audiobook makes sense. I have put this advice into practice and things have begun to change. I know that even if things do not work out, I gave it my best effort. However, putting all of this into action I am pretty confident that we are headed in the right direction.

Each every word of the audiobook charmed me.

Unlike other audiobooks which seems more like prose stage for the author this audiobook a tually is more like "recipe" and step by a step action plan with explanations...the author's experience of actual successes is beyond theory

The author's information has been the most informative of all marriage related self-help literature available. His work has helped me in sorting out priorities in my troubled relationship. I would recommend his information for anyone desiring to strengthen their relationship.

This audiobook was easy to listen

This audiobook was easy to listen to. It was not a dry audiobook , but just a person sharing good, useful information in a language that doesn't make it a chore to take in. I listen to it through in a few hours, and will not hesitate to listen through it again, whether in its entirety or picking out certain sections where I know I need a refresher.

I'm a marriage therapist so I've listened to a lot of marriage audiobooks. What's so different about the author's audiobook is that it's not only insightful...it's practical. Finally, I don't have to wade through all the theory and therapist talk to get to what actually works. From a man that does this every day with real-life clients.