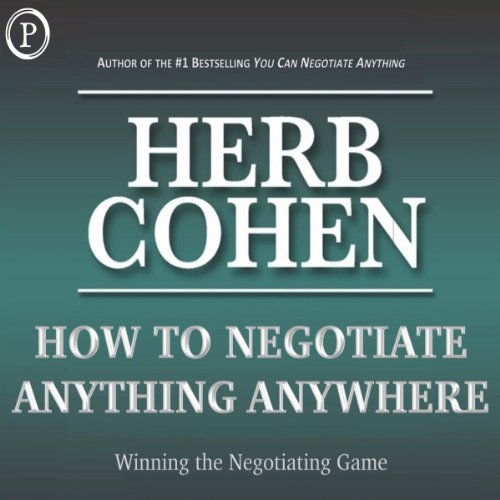 How to Negotiate Anything, Anywhere

Cohen views the world as huge negotiating table and describes the art of compromise not as a competition but rather as the art of offering choices. His humorous lessons and apt imitations of famous personalities and personal acquaintances are truly hilarious. Listen and you’ll come to view life with a whole new perspective.

Herb Cohen's You Can Negotiate Anything has sold over 1.4 million copies and spent nine months on the New York Times

best seller list. Cohen has been intimately involved with highly publicized negotiating dramas including the Iranian Hostage Crisis, the skyjacking of TWA Flight 847 and the Achille Lauro terrorist incident. Besides serving as an advisor to two US presidents, acting as a consultant to hundreds of corporations, entrepreneurs and governmental agencies, Cohen has aided individuals in their successful attempts to take on and prevail over corporate giants such as General Motors and Metropolitan Life. Now known as "the guy the pros go to" for help in negotiating crisis, business, and other important strategy.
©2001 Herb Cohen (P)2001, 2014 New Millennium Entertainment, Phoenix Books
Career Success Negotiating
Show More Show Less

What listeners say about How to Negotiate Anything, Anywhere

Not what I was expecting. Very short and not very informative. A total waste of time and money

I'm hope Herb had a good time reading it

Would you try another book from Herb Cohen and/or Herb Cohen?

This book was at first positive and a little motivational, but quickly I found it falling short and lacking in real strategic substance. I don't recall any real techniques or plans of attack, sees like Herb has had good luck with his bubbly personality but can he negotiate with an angry shop owner on a street corner in Los Angeles? Has he had to fight for minimum staffing on a team project in which his greedy bosses would not give him the resources to get the job done? Glad you had a fun life Herb, but I feel your street credibility is paper thin and lacking. I am looking for Negotiation tactics that are specific and measurable, memorable, ideally pneumonic for real use in the field in the heat of battle. Having a magnetic personality is a technique too of course but that's all I found in this book, much to be desired. I felt like I learned very little here.

Short and full of clichés

The sound quality is not the best. And while it's nice to hear the author read this out with some personal life examples (none related to major historic events as suggested by the into).

A very simple approach to negotiating anything and anywhere... Certainly worth the money... Good book...

love it,
I enjoy the side stories. Now, I will negotiate everything, job, purchase etc...

I have learnt a lot from this Audio book

i have learnt about alot about negotiation such as
1. What gives you power in negotiation
2. How to get a 'Yes' result from somebody that have said 'No' before
etc
i have not regretted my time listening to this Audio book

The audio version was chosen as an alternative after a few half hearted failures trying to find this book online.

Unfortunately, this version sucks compared to the practical lessons gleamed from reading the book decades ago.

Fortunately, the negative experience that my laziness reaped provided determination to patiently search and attain what I really wanted.