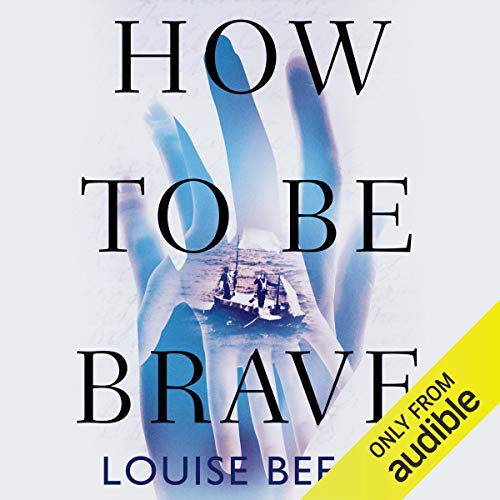 How to Be Brave

Natalie and Rose are transported in their imaginations to the Atlantic Ocean in 1943, where one of their ancestors survived in a lifeboat for 50 days. Natalie struggles when her daughter, Rose, is diagnosed with type-1 diabetes, but the researching and retelling of Grandad Colin's story provides them both with a way to fight through.

Louise Beech has always been haunted by the sea and regularly writes travel pieces for the Hull Daily Mail, where she was a columnist for ten years. Her short fiction has won the Glass Woman Prize, the Eric Hoffer Award for Prose, and the Aesthetica Creative Works competition as well as shortlisting for the Bridport Prize twice and being published in a variety of UK magazines.

Louise lives with her husband and children on the outskirts of Hull - the UK's 2017 City of Culture - and loves her job as a front of house usher at Hull Truck Theatre, where her first play was performed in 2012. She is also part of the Mums' Army on Lizzie and Carl's BBC Radio Humberside Breakfast Show. This is her first book.

What listeners say about How to Be Brave

What made the experience of listening to How to Be Brave the most enjoyable?

A unique story which we both found captivating and all consuming! We could not believe how drawn into this we became during the course of listening. Incredibly heartfelt narration added emphasis. A really different story which was an eye opener on the issue of diabetes and a brilliant recapturing of wartime memories.

Rose was my favourite character as she wonderfully portrayed just how a child finding out they had diabetes would react. Mum also liked Ken on the boat - a strong and believable character on board the ship and the lovely accent topped it off!

When poor Rose experienced the hypo in the middle of the department store and everyone starred at her and Natalie and of course, the blue haired woman who assisted. Although serious, Natalie accepted the situation and faced it head on - learning how to deal with it through humour and sensitivity.

Rose wanting to do her own injections and no longer having her mother coming to school and showing her up! To think of Natalie dealing with the diagnosis with her husband away with his posting in the armed forces added to the resonance,

Sensitive and deeply thought-provoking. An incredible listen. A unique story and one of the best narrations that we have listened to since joining Audible.

Wow fantastic loved the way the two main characters inter twined with each other! Such a sad true story of bravery of the survivors from the war would make an epic film!
M Chance

A heart-rending tale - get the tissues out!

Louise is a master storyteller and has an amazing ability to make you care about her characters. This story is beautifully crafted together - the modern-day story interwoven with the story of Colin, who was lost at sea. A masterpiece.

Mum of a T1D toddler here. If you're in a similar position and wondering if this is worth a listen, go for it - it's an uplifting story of the situation, and how to make it out of the initial shock with your sanity and family intact. I really loved the story of the boat. Some of the 'smelling the sea' premonitions were a little bit over-egged, for me, but the overall effect of weaving the two stories together was fantastic.

A wonderful story which keeps you coming back to see what the next day will hold. Great narration

A story within a story a perfect audio book and a beautiful story of real life,family and love.

I truly love this book, read by Flinty Williams who did a wonderful job. It's one of those books that never leave you, I find myself thinking about the characters, Colin mainly. Its my number one book of the year & is also one of my all time top ten favourites. A truly remarkable work of art.

Loved listening to this story unfold

I loved the sound of the narrator's voice and accent and she really captured the spirit of the characters and story.

What was one of the most memorable moments of How to Be Brave?

The struggles between the mother and daughter coming to terms with how life was changing for them both culminating in a loss of control and the feelings of guilt that followed.

Have you listened to any of Finty Williams’s other performances? How does this one compare?

This is the first one, but I will be looking for others from now on.

Yes, but time didn't allow unfortunately. But I did start listening to it whenever I had the opportunity whether it be in the car, doing house work or in bed.

I loved how the two stories came together and I was interested in finding out how both were going to turn out.

What an amazing experience! A beautiful mix of fiction and non-fiction. Heart wrenching at times, uplifting at other times. I cannot get this incredible story out of my mind. With perfect narration, this is an experience I wish for everyone.

Great characters past and present

wished it could have gone on a little more about the rescue but otherwise great. Easy to identify with characters.