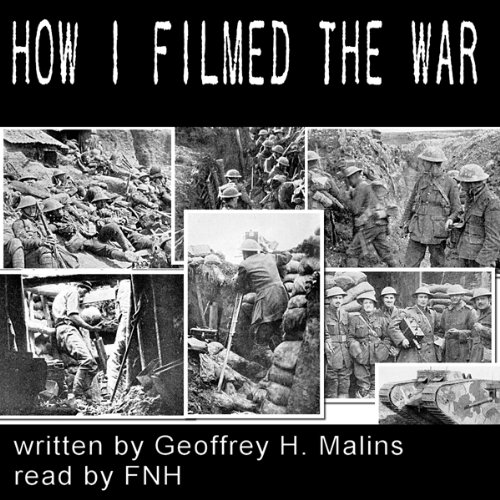 FNH Audio presents a complete and unabridged audiobook covering the war-time activities of the British Empire's official military Cinematographer. Follow him as he sets out from Britain, crosses the channel and enters the domain of trench warfare, chemical weapons, explosive shells and constant danger.

The Lieutenant, took his camera up in the air and flew over the trenches, and down into the trenches themselves. To get his films, he had to crawl through the mud, facing the bullets and high explosive shells along with the men he was filming.

This book is full of simply astounding scenes of bravery. In one scene Malins sprints across a road under direct fire from machine guns. In another he stands up in a trench while being sniped in order to film the men going over-the-top. In yet another he finds himself blown out of a bunk and in amongst the dead. The narrative is also sprinkled with occasional melancholy, such as when Malins passes time with an artillery officer, but when he returns a few hours later, it is to find his new friend dead. This book gives you an insight into the blood, bravery and hell that was WWI from a different view point.

What listeners say about How I Filmed the War

An awkward book to review. Malins certainly had a story to tell, though the there are structural problems with this one, only partly explained by it having been written in 1917 and thus subject to wartime censorship. We get sudden jumps in time with important linking material being omitted. It’s as if whole chapters had been omitted. One important jump occurs early on when we move from 1914 and Malins as a civvie to him as an officer elsewhere on the Western Front.

A quick check on the net will highlight other issues, such as Malins’ implying that he was the only one working with a camera (including contributing to the famous “Battle of the Somme” film). More on this latter film would have been useful, especially as extra faked scenes were filmed. To be fair, though, wartime censorship issues might explain this.

Malins’ style can be stilted at times, though he is not a natural writer. A decent introduction and conclusion would have been useful. Nonetheless, it offers an interesting first-hand view of the tragedy. Do not expect something with the style of a Robert Graves or the journalist Philip Gibbs, but Malin’s story is certainly worth prevserving.

At a time when tanks were unheard of (he describes his encounter with them as they are first deployed) and the real possibility of failure in the Somme faced the British, Geoffrey H Malins entered the war to film battles as they happened. A time of such naivety and yet one of the most brutal episodes in our history, this story provides a unique (and highly biased as is to be expected) point of view of WW1. The narrator does a wonderful job of bringing the character of our hero to life adding real warmth to the narrative. If you are at all interested in WW1, The Somme battles, early film making or just early 20thC history this is well worth a listen.