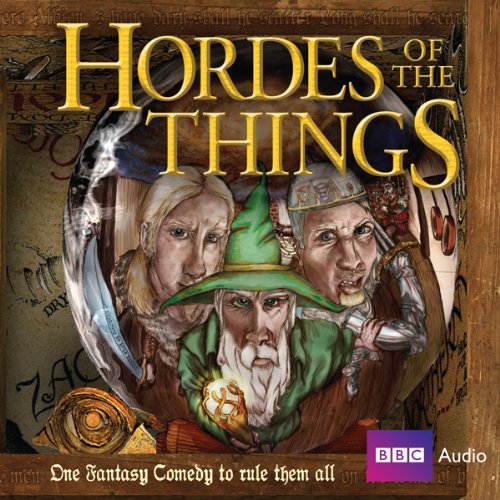 Hordes of the Things

The kingdom of Albion is under threat from The Evil One. The elves have trusted the kingdom with a mystic device (the number seven) and have entrusted a wizard by the name of Radox The Green to find a hero to save the land, in the shape of Agar Son of Athar.

The series consists of four half-hour episodes or "Chronicles", originally broadcast on BBC Radio 4 from November 25 to December 16, 1980, and written by Andrew Marshall (2 Point 4 Children) and John Lloyd (Hitchhiker's Guide to the Galaxy and QI).

What listeners say about Hordes of the Things

I really enjoyed this and am glad to have it in my library. Good fun

The book has a great cast and they do the best they can with what they have been given. Unfortunately the writing is just not very good. A good parody knows it's subject for good and ill, and can love the good whilst making fun of the less good bits. This entire thing is laughing at and not with and lacks the self awareness to realise that to effectively parody you have to be better than that which you parody. This isn't aware of how dire it all is. The story (if such it can be called) doesn't even end and finishes on a cliff hanger. Actually it's not a cliff hanger because I didn't care what happened next and nothing would induce me to purchase a follow up.

Have you listened to any of Simon Callow’s other performances? How does this one compare?