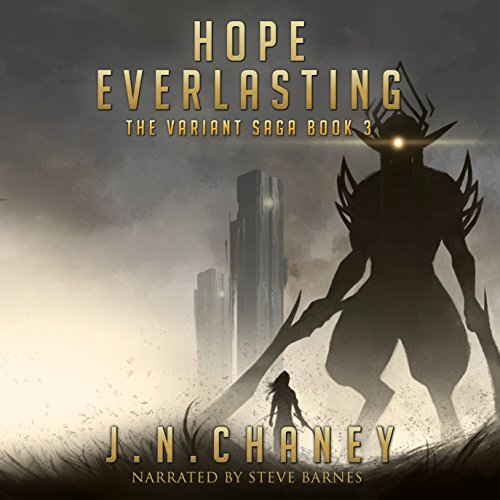 Terry is on the run, having escaped from prison and killed its overseer. He and his friend Ludo need to find a way to get to the northern border. That's where Ludo's wife is being held, but time is of the essence. If they don't hurry, she'll be sacrificed to the gods as part of some barbaric ceremony. With an army at their heels and a continent to cross, Terry and Ludo will need all the help they can get.

Meanwhile, Mei Curie has opened a portal to another world...and it isn't what she expected. There are worms the size of cars, animals with bulletproof hides, and an advanced alien race unlike anything mankind has ever witnessed.

Not to worry, though. Johnathan Finn has just the ticket: a rifle stocked with bullets, ready to deal with whatever threats come knocking. Along with his team of soldiers, John is here for a single purpose - to find his missing friend and bring him home - but in a world as strange as this one, a simple search and rescue mission could prove deadly.

What listeners say about Hope Everlasting

In any series you always have your favourites and so far I think this is mine. I love the unassuming characters in this audiobook, their comraidary, humour, determination and loyalty comes through clearly and you can not help but like them. Nothing is really black and white in this storyline, the deceptions, intrigue and surprises keeps you on your toes, unable to truly guess where the story will lead next. The narrator fits the book well, he gives the characters individual voices and his somewhat eclectic voice lends itself well to the story. Chaney's descriptive writing highlights both the similarities and the differences between the various areas and groups, capturing your imagination and forming a richness and depth to the world and it's people. The differing landscapes, variety of cultures and the appealing characters quickly draws you in, leading you on an exciting, action filled story that leaves you wanting more. I will look forward to hearing the continuation of this story in the next audiobook.

entertaining installment in a creative world

This installment lacked some of the intensity of the first two volumes, but it was still an entertaining listen, nonetheless. The world and the characters are very memorable, and the customs of the people we've encountered allow us to see the "humanity" in this other world. The fisherman character is my new favorite and reminded me of the korean "mermaid" divers that were filtering through the news awhile back. I'm hoping maybe there will be a spin-off series just about his world.

This series just gets better and better.

Would you listen to Hope Everlasting again? Why?

Yes, I tend to go back to really good stories and visit them again after a little while.

What was one of the most memorable moments of Hope Everlasting?

The fight with the giant guardians.

On the ship with Terry wishing to become a sailor and traveling the world.

Wonderful clean story with the exception of violence. I voluntarily reviewed this audiobook after receiving an advanced listeners copy.

This series just keeps getting better

What did you love best about Hope Everlasting?

This book had me close to tears and also flinching from the action scenes. Chaney has stepped up his game in this third installment in the series. The depth of the characters continues to increase, creating a stronger emotional tie for the reader. And I dare say that the writing is even more poetic. Here's my favorite part below. It makes a beautiful commentary on our history and currently reality our own world.

"No one wins (with war) in the end," he said simply. "Even after the bodies are stacked, and the dust is settled and the rubble cleared...even when you've wiped it all away, you've still got blood on your hands, and half the world's still dead...and then it comes again."

Another great book to move the series along. They are full of action and great story lines, and the characters are getting more and more fleshed out. I can't wait for the next book in the series!

You should always read the first books in a series to start but especially so with this series. This is the third installment of the Variant Series. I found this book to be intriguing and it left me wanting more! I'm extremely interested in seeing where the author goes with the next book.

Would you listen to Hope Everlasting again? Why?

Yes, I'd listen again. This is a great addition to an addictive series.

The character development and writing style are amazing. I was hooked from the first chapter.

An incredible world full of surprises and twist and turns. The people are incredible and the writing is intriguing. It is a real page turner and without giving away the plot all I have to say is if you have not started this series you should start it NOW!

His characters are well developed, believable, and inspiring.The characters never stop developing which is what I love so much about this series!
The world building is on a level of the greats, Terry Pratchett, Neil Gaiman, Stephen King. A wealth of detail on every page gives you no doubt as to where you are in his world.
Plot: The plot is full of twists and turns, not to the point of getting lost but to the point where you wish to keep reading to see what happens!