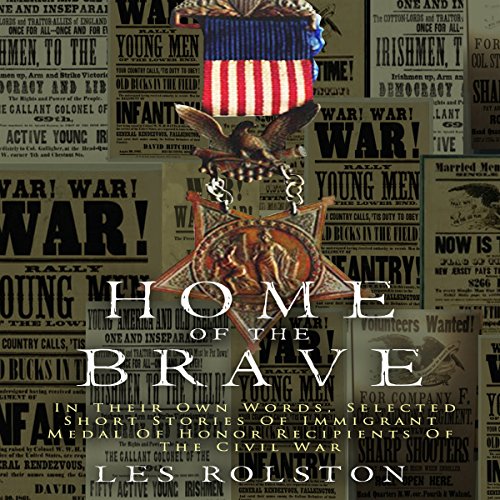 Home of the Brave

By: Les Rolston
Narrated by: Kevin Charles
Try for £0.00

Taken directly from affidavits stored at the National Archives in Washington, District of Columbia, immigrant soldiers and witnesses attest to the events that resulted in 26 soldiers of these soldiers being awarded the Medal of Honor.

What listeners say about Home of the Brave

History in a Personal Way

Loved this collection of stories about the heroism of immigrant soldiers during the Civil War! These men all did things in the moment and sometimes over the course of the war that were truly incredible to understand. In this listen, you get to know the birthplace of each man as well as when/how they came to the US to fight in the war. Les Rolston also tries to give you the history of each man after the war, if they got married, how many children they had, when they received their medal of honor, and when they were awarded a pension (if they were ever granted one).

This book helped me to understand on a personal level the cost of war. Most of these men (and some just barely teen boys) went into the military as strong, healthy soldiers and many would never get over the wounds they received during this time. To understand, if even cursorily, the struggles they had in overcoming their wounds and then to provide for families at a time when it was solely up to the men in the family to do so tells you what honorable men these were. Most of them lived well into the 20th century and were treated poorly upon requesting their pension when their war wounds finally made it impossible for them to earn a living. It took much effort to request and prove their valor and then still more effort to actually obtain the pension. This wasn't the point of this book but it was glaring in each recounting for each soldier. We have always asked the most of our soldiers and then given them the least when they come home again.

Kevin Charles has a perfect voice for the recitation of this information and he was a pleasure to listen to throughout each soldier's story.

What made the experience of listening to Home of the Brave the most enjoyable?

This audiobook is based on a unique and interesting concept: the (war) stories of immigrants who served in the American Civil War and received the at-the-time newly-created Congressional Medal of Honor

What was one of the most memorable moments of Home of the Brave?

All emotions are captured here, each story has it's own feel.

I must have misread the description as I was expected to be told the stories like in a novel. My mistake. I only listened to a small portion of the book.

Stories of honor and service....

What does Kevin Charles bring to the story that you wouldn’t experience if you just read the book?

Strong, deep voice enhanced the intent of the book.

Yes, the stories are concise, engaging, and add interesting perspectives to well known and not so well known battles.

What other book might you compare Home of the Brave to and why?

Any other military history book that uses memoirs, journals, and personal letters as the basis for the book.

Which character – as performed by Kevin Charles – was your favorite?

He didn't play different characters. Kevin Charles narrates the stories and often added additional facts to the events that lead to earning the Medal of Honor.

All emotions are captured here, each story has it's own feel.

Where does Home of the Brave rank among all the audiobooks you’ve listened to so far?

This audiobook is based on a unique and interesting concept: the (war) stories of immigrants who served in the American Civil War and received the at-the-time newly-created Congressional Medal of Honor.

What a novel storyline!

In addition, many of the stories of these immigrant soldier-heroes were themselves fascinating!

These Stories Need To Be Told!

Absolutely, and in fact I've already begun. There's no way to fully understand the significance of each man's story on first hearing. So much more is heard and understood on subsequent listening(s).

The inclusion, to the extent known of what these men did/what happened to them after the war.

There were so many. As a retired military officer myself, I tried to put myself into the environment and scene of each story. Each is very well written and well told to the extent that information is available on these heroes. I was struck by the story of Thomas Plunkett who when transiting back to his unit, stopped to assist and encourage a wounded Colonel sitting under a tree. That Colonel was Rutherford B. Hayes who later became President of the United States!

The awardees were from many countries and were 14-yo drummer boys to Colonels. The other thing that struck me is that in so many cases although the incidents cited in their respective medal citations, more often than not, those incidents were not uncommonly one of many such that that soldier/sailor performed in multiple situations.

I have read numerous oral histories, memoirs and biographies of combat soldiers. Whether highly decorated, as these were, or not, they have all been heroes as each has given the government a 'blank check' on enlistment and has performed their duty well. I salute these heroes and, although my salute is genuine, it seems to me to be insufficient. Perhaps I should rather say, I stand in awe of these gentlemen who preserved the Union ultimately giving and maintaining the freedom we enjoy today.

The author actually had a different goal in mind, but became discouraged at the scarcity of information available from The US National Archives, so he distilled what findings he could using the award of Medal of Honor as the cohesion. Each man's tale encompasses his nation of origin, reason for immigration, salient factors of his military service, life after hostilities were ended, why and when he was awarded the MOH. It is a compilation well researched and documented, and of interest to all sorts of historically minded readers.
Kevin Charles continues to give an excellent performance with his sense of timing and cadence, and a rich unaccented voice.
"This audiobook was provided by the narrator, author or publisher at no cost in exchange for an unbiased review courtesy of AudioBookBoom."

Amazing to look at what was done in war during that time period. Especially when compared with today's touchy feely generation. To hear of these young immigrants to our country capturing such large amounts of men through shear bravado and the incredible acts of bravery though heavy fire and massive injuries. Astounding. Optimum listening speed 1.25 I received this audiobook for free from the author narrator or publisher via audiobookblast in exchange for an unbiased review.

If you could sum up Home of the Brave in three words, what would they be?

Each of the recipients. Their stories.

Which character – as performed by Kevin Charles – was your favorite?

This was a work that was NARRATED not intended to be dramatically performed.

It reinforced my beliefs that the U.S. is an Ideal that many from all over the world have and will continue to lay down their lives for.

This was a good listen. I think I might have preferred the book. Some of the impact was toned out by just listening. That's not saying anything negative about the performance. In my case, it's a preference. I read a lot of Military history. Somewhere I've read about several of the individuals chosen by the author.

Thank you for making it available.