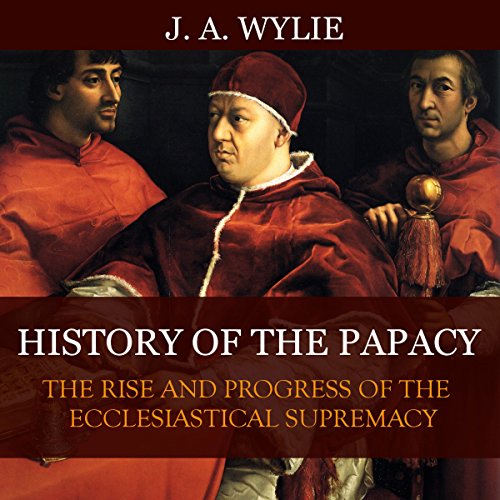 History of the Papacy

The papacy, next to Christianity, is the great fact of the modern world. Of the two, the former, unhappily, has proved, in some respects, to be the more powerful spring in human affairs and has acted the more public part on the stage of the world. To fully trace the rise and development of this stupendous system is to write a history of Western Europe: the decay of empires; the extinction of religious systems; the dissolution and renewal of society; the rise of new states; the change of manners, customs, and laws; the policy of courts; the wars of kings; and the decay and revival of letters, of philosophy, and of arts.

These all connect themselves with the history of the papacy, to whose growth they ministered and whose destiny they helped to unfold. On so wide a field of investigation, neither our time nor our limits permit us to enter. Let it suffice that we indicate, in general terms, the main causes that contributed to the rise of this tremendous power and the successive stages that marked the course of its portentous development.

Book one: History of the Papacy

Chapter I: Origin of the Papacy

Chapter III: Rise and Progress of the Temporal Sovereignty

Chapter IV: Rise and Progress of the Temporal Supremacy

Chapter V: Foundation and Extent of the Supremacy, the Cardinal's Oath

Chapter VII: That the Church of Rome Neither Has Nor Can Change Her Principles on the Head of the Supremacy

Book two: Dogmas of the Papacy

Chapter I: The Popish Theology

Chapter II: Scripture and Tradition. Dogmas of the Papacy

Chapter III: Of Reading the Scriptures

Chapter IV: Unity of the Church of Rome

Chapter V: Catholicity of the Church of Rome

What listeners say about History of the Papacy

Not What I Expected.

Though I am not a Catholic; I am convinced that Protestantism would have nowhere to stand, if it were not for the Catholic church's resolute preservation of the Holy scriptures. And this they did for many centuries. This reality creates within me a deep sense of gratitude - not animosity.

I gave this audio book 5 stars. I did this because the material was (as nearly as I could tell) well researched, and because Tim Cote did a terrific job reading the text.

It’s not really a history of the papacy. It’s an opinion piece by a disgruntled author. It’ll please people with a grudge against the pope, reinforcing the “pope is the antichrist” theme that another reviewer championed. I wanted a book that was an actual history. This is decidedly not an actual historical look at a topic.

What did you love best about History of the Papacy?

I have been studying medieval history, in particular, Church history for 28 years now and I find this book to be one of the best books on the subject. The author is obviously very knowledgeable on the papacy. He is extremely accurate on the subject. This book is not a quick read; on the contrary it is very in-depth on the subject. Wylie gives many references for his sources which lend to the accuracy of the writing; in addition, it is also very useful if you want to study the topic further. If I were to recommend one book on the subject of the papacy this would be it. I know that many people will not like this book because of some of the harsh things that are presented in regards to the catholic church, but, in fact, it is not this type of book that they are at odds with, but instead with the Catholic churches' history. At times, it has been less than nice and as historians, we cannot slant the truth of history because we don't care for what it looks like.

It was very scholarly.

The horrid deeds of the catholic church and the papacy in general have been , here recently , quite diminished. Many nowadays try to sugar coat the past sins of the church of Rome, however, it is works such as this that preserve such knowledge. As a theologian and historian, this audio book was a fantastic listen and the narrator, Tim Cote, was amazing.

This is one of the best books on the papacy that I have ever read.

This is really great! The history is true!

Although many people will not agree, this is true history, as Wylie takes a look at history through a Biblical lens. That means there are no Popes, hence, not everyone who is not Protestant will be happy with this at all. I think it's absolutely spot on and the only reason it doesn't correspond with Pagan Romanism is because Wylie's Authority is the Bible, not Popes, which aren't Biblical. The narration is pretty dry, so students of Church history need to be patient. The narration could have had a lot more "pep" -- my suggestion is to listen or read this wonderful book along side with your Bible. The Truth of Jesus Christ will set you free! God bless you all.