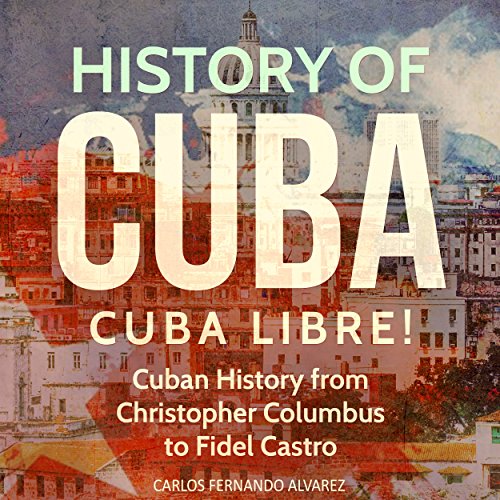 Learn everything you need to know about the history of Cuba!

Have you always been interested in Cuba, its people, and its history and fascinated with Cuban beliefs? Then this audiobook is essential!

Cuba has a certain charm that may not be experienced anywhere else in the world. The culture of Cuba is vibrant and varied, and its music - rumba, timba, and salsa, among other music styles - has become globally renowned. As a former Spanish colony, it shares numerous cultural traits with neighboring Caribbean, South American, and Central American countries.

As Cuba is a homeland with a long and rich history, the study of Cuban history is also the study of the development of the New World by Europe. Cuba played a significant role in the growth of the New World, and through its history, it has been a part of most important world events that have taken place around it. History of Cuba: Cuba Libre! is intended to acquaint listeners with a general overview of Cuban history, its freedom, and the situation that made that development possible.

You will learn about the following:

The information given was interesting but narrated in such a dull and robotic way that it became dull and monotonous. Shame as had potential to really good.

This book gave me an important overlook of Cuban history which enables one to know where to look for more information.

the book is great, it has a lot of useful information. While I read it I plunged into the history of this amazing country

I invariably was inquisitive about knowing all the behind the scenes. This book was well definitely worth the read.

Although the book is not great, but it has a lot of useful information. While I read it I plunged into the history of this amazing country.

You will learn many things you never knew about Cuba. As always, Captivating History books are clear,concise and interesting to read.

A great look at Cuba and her history and the people who made the country. Another great write by Captivating History.

The author molded Cuba into a hard line communist state with ties to the Soviet Union . But, at the same time his people were poor & living in poverty . History will be the judge of this.

It is amazing how History has produced leaders of countries whether good of bad. Some simply take advantage of the political & economic situation at the time.

Everything you wanted to know is in these books about Cuba. For any study this is great resource that could be used in college for an introductory course on Cuban figures .

I loved this book. So much info packed into a relatively easy read. I couldn't put it down. Having just returned from Cuba, I just wish I had read it before I went instead of after. Highly recommend.

Thanks to the author

Great book. I could not put this book down. The author is a creative writer. Expecting new edition in the future. Thanks for publishing this book.