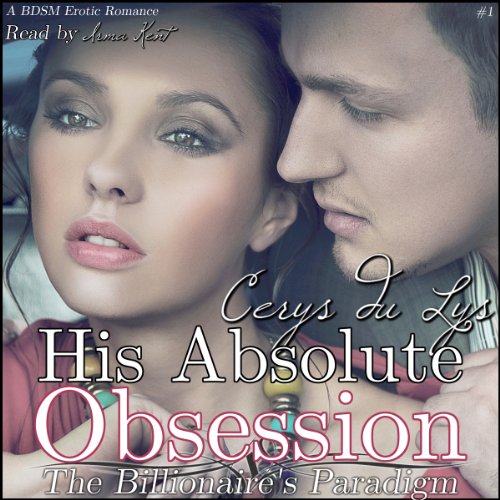 This is the first audiobook in the Billionaire's Paradigm series.

When Elise Tanner finds herself trapped with Lucent Storme in a library during a record-breaking blizzard, she panics. How did he get here? He doesn't know her, but she knows him. Lucent is the newly appointed Director of Public Relations for Landseer Enterprises and an influential business magnate; who wouldn't know him? Elise knows him and she hates him. He seems false, fake, too self-important by far, and excessively demanding. Worse yet, with over six feet of snow expected and the streets completely unmanageable, there's no way for her to escape him.

She's heard rumors of Lucent's darker sexuality, too. He's predatory and dominant supposedly - definitely dominant, as Elise finds out - but he seems like so much more, too. Lucent proves himself both intelligent and charming, though reserved and terse, much to Elise's surprise. Is there really more to this handsome, rakish, enigmatic man, or is it all a facade for his darker, more absolute, obsession?

What listeners say about His Absolute Obsession

A steamy encounter during a snowstorm!

Would you consider the audio edition of His Absolute Obsession to be better than the print version?

She's a good narrator - easy to listen to.

I'm a fan of Cerys du Lys and will definitely listen to more of her audio books!

The story is a light read, quirky and somewhat unbelievable, but enjoyable..... but why on the world would Audiobook sell a book that leaves you hanging and not have the other party available to buy!!!! Done buy this book unless the other party is available, the story stops on midstream and I hate when this happens and your left feeling cheated!

Would you be willing to try another book from Cerys du Lys? Why or why not?

Only if the book isn't in a series.

it made me furious..

please.. if a book is on a series that needs to be read to finish the book... please make sure the book is able tho be purchased!

Where does His Absolute Obsession rank among all the audiobooks you’ve listened to so far?

I love this book! Can't wait to listen to the rest, too. I've read the e-book and this is one of my favorite stories.

What was one of the most memorable moments of His Absolute Obsession?

I liked Lucent and Elise coming together and getting to know each other better.

When they were watching a movie together.

I know what happens later, but the ending was still very emotional to me.

The narrator is amazing. She brings the story to life and definitely does the character of Elise justice. She's so good. I liked how she did different voices for Lucent and Elise, too. The little things like that really make this a great listen.

I enjoyed the narrators tone and flow but the storyline itself is so slow and boring I had a hard time paying attention. I wouldn’t recommend it.

Can't relate to the narrator

unfortunately I couldn't get through the first chapter, i wasn't able to connect to the narrator, just my opinion - i will purchase the kindle book though and read it.

Stupidity dumbest book ever
I can't even believe Amazon has a stupid book for sale what a waste of time.

What did you love best about His Absolute Obsession?

I loved this book as an ebook but it's even more awesome to hear it! Elise and Lucent's story really comes alive in this great production. Cerys du Lys writes a wicked romance with non-stop passion. I particularly enjoyed the blend of heat, mystery, and love in this steamy romance!

Definitely Lucent. Hot, billionaire, alpha male...what's not to like?

What does Irma Kent bring to the story that you wouldn’t experience if you just read the book?

Wonderful narrator who really brings the story to life! Irma does a great job acting out the character's tensions and narrating pretty much everything in a really engaging way. Highly recommended. I hope there are more books she's worked on.

Incredible love scenes. Cerys knows how to crank up the heat at just the right moments, and Irma turns them into full blown fireworks. This is one of my favorite billionaire romances and it's a thrill to hear it again while I relax!

This was not for me-it was silly and boring. The dialog was so unrealistic and there was no chemistry. Also the narrator sounded like she was 12.

Very Disappointing. The story was slow and I had trouble with my mind wondering while trying to listen. It did not hold my attention. I finally quit listening, just too bothersome.

The book was not good. Ms Kent was ok, but not even good reading can make a story better. Do not spend your money to buy it.