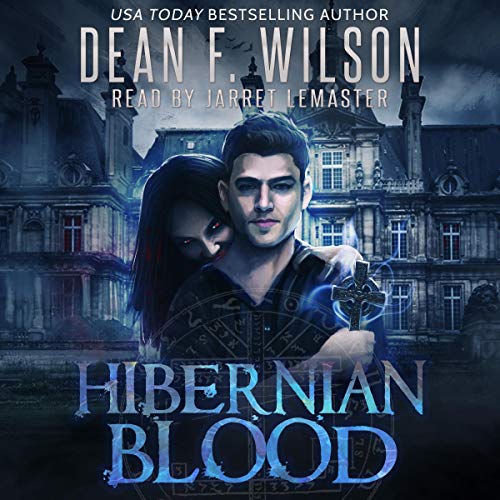 By: Dean F. Wilson
Narrated by: Jarret Lemaster
Try for £0.00

James Halmorris has a cursed name. He doesn't believe the rumors until he travels to Ireland to find his roots, finding a whole new world of witches and vampires instead. He has entered the Hibernian Hollows.

He arrives right at the point where five vampire families are readying to fight a war for the vampire thrones of the Emerald Isle. James is forced to cast off his doubt and fear and step into the bloody ring. He's supposed to be the peace-keeper, but if he can't stop the battle, he'll have to join the war.

What listeners say about Hibernian Blood (A Vampire Urban Fantasy)

A fun beginning to an exciting new series

I've been a fan of Dean's work ever since I stumbled across his Coilhunters series. This book is the start to another great series that I can't wait to see progress forward (in audiobook format, since that is the way I enjoy my books).

You could say I am a fan of stories involving vampires and vampire lore, so this one naturally fits that bill. I loved the scene-setting at the beginning of the story with the descriptions of the walk into and out of town after a string of bad luck. From there, it was fun to watch James progress toward his destiny of becoming a Blood Warden.

This is another solid 5/5 work from Dean. The narrator was a great addition to the story and I loved his vocalization of some of the more esoteric creatures.

The beginning grabbed me so quickly, I was so excited. The story moved and maintained my interest until it started building to the finish. Then the unique parts of the story faded away and it became a bore. This may have been more to do with the narrator not reading with more urgency during the heart racing scenes than the story itself. A couple of characters were introduced in the beginning and not really fleshed out, although they would have been more interesting than standard vampires.