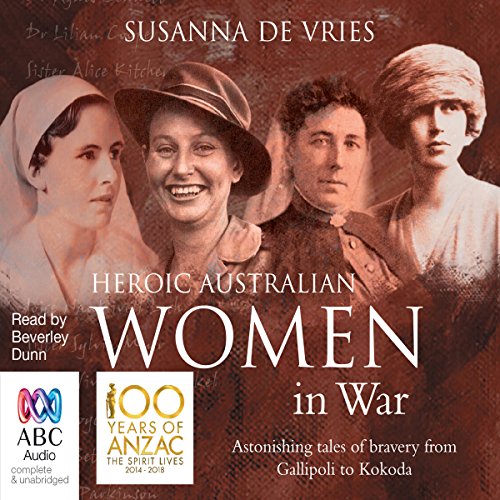 Author Susanna de Vries tells the stories of 11 remarkable Australian women who made major contributions during wartime. Many of these stories concern nuns and nurses who saved countless lives but have to receive the recognition they are due. Performer Beverley Dunn brings her distinguished voice to these tales, which focus on the women's actions in war as well as their personal and professional sacrifices - many watched friends and colleagues die, and contracted health conditions from which they never recovered. A wonderful choice for learning more about the contributions of Australian women.

In this inspiring book, Susanna de Vries profiles the love, dedication and selflessness of 11 outstanding Australians over the course of two world wars - from Olive Kin, who saved countless lives in the war-ravaged Balkans, although she lost her heart; to Gallipoli nurse Alice Kitchen, who also served in France; to Vivian Bullwinkel, who survived the Bangka Island Massacre only to face more than three years watching her colleagues die as a Japanese prisoner of war.

Facing not onlt the astounding courage they displayed amid death and chaos but also on the triumphs and pain of their personal lives, Susanna reveals how these women were as influential and heroic in civil life as they were in war.

I took this book to listen to it on my vacation and I couldn't put it down. I discovered so much about history at that time, and what these women were willing to give up to help others. Some parts were upsetting but made me realize what had happened during that period. I would recommend this book for anyone who would like to know more about history during the war.

You will never complain about your life again

This one started a bit slow but after becoming immersed in the characters lives I could not stop listening, the sacrifices these magnificent women made is almost beyond comprehension.

This book transcends not only the professional morays they had to overcome to provide a small degree of humanity to of the many wars that the courageous soldiers from Australia fought in, e.g., Gallipoli, Serbia, getting little or no recognition for their sacrifice of life and limb.

You will become absorbed in their sacrifices, loves, the charities they established, et al. I wish the author would write a sequel.