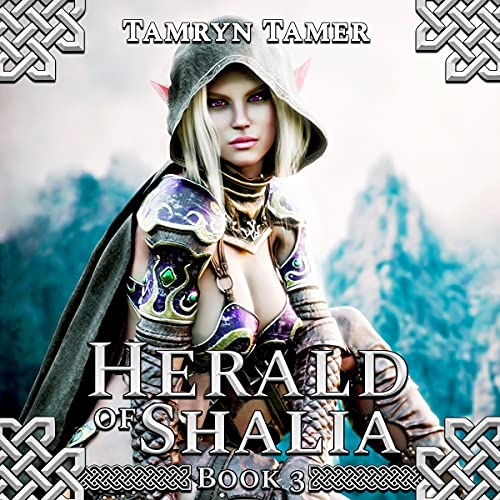 Sebastian Frost’s territory had grown massively as did his reputation.

He was the Herald of Shalia that married a demoness, invited hundreds of Arachne to live in his territory, and married a princess of Zira all in the same week. All while securing peace and trade agreements with the two largest countries on the continent.

His reputation even crossed the ocean and when Cassia, the Prophet of Shalia, heard about Frost, she hopped on the first ship back home to meet the herald.

What listeners say about Herald of Shalia 3

Good continuation of story wanting more slade banter, frost is a fighter not a hero which is great does not care what others think of him but harm someone close to him and boy had day in hell

such a funny series!

if you like the other books you like this one! I can't wait for the next book!

Great work from Amber and Kieran. Good luck to Tamryn with getting book 6 out.

If you are following the story it gets better. The mother in law is found and the story evolves.
This series is unique more sexual encounters that are in vivid details. The story is what makes it though, it follows a path that allows each book is a story on its own but yet they all tell the while story. So far the author has not left us with a cliff hanger which is great. They have accomplished a story with very unique characters and brought them to life with their own personality. The banter between characters highlight that to high degree.
Story narrators have without a doubt brought the characters to life which is not an easy task. Well done!

Great book of a great series.

Isekai harem story at its best. Please add the rest of this series to audible. Eagerly looking forward to books six and beyond. Thanks for writing.

Pure comedic satire! I couldn't stop laughing. Can't wait for the next book, it's getting good!

Really, I can't say enough about the stellar performances of Amber Lee Connors and Kieran Flitton. They are wonderful and I am so thankful the author chose to cast them to bring this series to Audiobook. Each character is perfectly distinct and complete, and even the supporting characters have charm and individuality. I can't imagine hearing the characters with any other voices

The pacing and the level of ACTING is just top notch from both Ms. Connors and Mr. Flitton, but Ms. Connors especially is a marvel. Such depth and passion and poise where needed, and such fun and playfulness where needed. The two narrators have set the gold standard for dual male/female narration and they deserve to be very successful in their narration careers should they choose to continue (and I HOPE THEY DO!)

The story in the third installment has more love and sex than action and intrigue, but the characters have become so engaging that I'm sure I'll keep listening to any future books in the series. That Renna is becoming pretty annoying though, If I'm being honest. But Amber Lee Connors makes her so impishly lovable that all is forgiven.

I understand this is erotica, but the first book had a good balance of sex and story. book 2 leaned much more into the sex aspect with little progress. I was hoping this installment would return to the original formula, but sadly it got worse, with multiple straight chapters with only sex and no plot. This ends a good series for me.

This book like the prior two is wonderfully written and the narrators do an absolutely incredible job. This brook just makes me need the next one already which I guess is a good thing for the writer in the end. Keep up the great work and I hope the next one is released as soon as possible.

Keep up the good work please! Enjoyed the narration very much. Wish I was in his place.

Really well done all around. I really enjoy when the gals fight for some reason especially when Renna is involved. It’s truly funny!