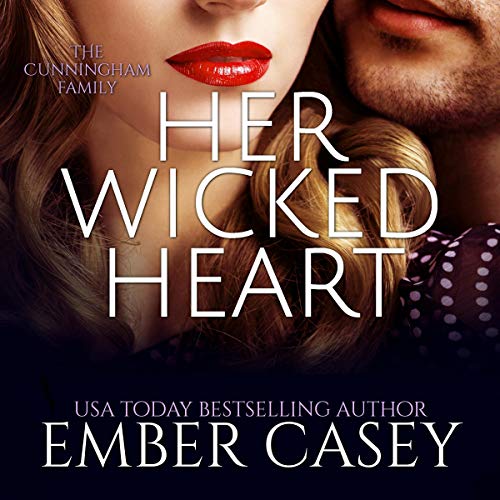 Lou just needs someone to take her away. It doesn't matter if she knows his name. Or if he knows hers.

Actually, it's better if he doesn't know hers.

At least, that's what she tells herself when she's sticking her tongue down the throat of the sexy handyman she just met at her new job.

Her father's dead. Her family's fortune is gone. And - oh yeah - she's assumed a false identity so she could get a position at Huntington Manor, the luxury tourist attraction that was once her family's estate. Nobody here knows that she's Louisa Cunningham, former heiress and current complicated head case. To them she's just Addison Thomas, assistant to the hotel's general manager.

Well, except to handyman Ward Brannon. To him, she's the strange, but intoxicating, new girl who tried to have sex with him without even knowing his name.

Ward is everything Lou knows she should stay away from. He's a playboy. He's constantly getting in fights. And he resents her family for reasons she doesn't understand. But, in spite of herself, she can't stay away from him, even when that puts her secret at risk. Even when it becomes increasingly clear that he harbors a few secrets of his own.

What listeners say about Her Wicked Heart: The Cunningham Family, Book 3

This was a pleasant surprise. I wasn't sure what I was getting into, since it's the third book in a series and I haven't read the two preceding books. It worked well as a standalone and I'm considering going back to purchase the first two.

The story was interesting while still being realistic. The main character is completely unpredictable, so it made for a fun ride. The narrator was a little 'rough' sounding...I might think twice about getting the other books in the series if it's the same narrator. Otherwise, a fun, sexy new adult read.

I was provided with a free copy of this audio book by the author, publisher or narrator in exchange for an unbiased review.

This was a good continuation of the Cunningham Family series. Louisa is emotionally immature and born into great wealth. She never knew her mom and her father died suddenly. Louisa is an interesting character. She works at her former home that became a tourist location. She meets the sexy handyman who works there. Things take off from there. Sarah Beth Goer did a good job with the narration. I received this free copy audiobook at my request and have voluntarily left this review.

Even better in audio!!!

What made the experience of listening to Her Wicked Heart: A Cunningham Family Novel the most enjoyable?

Such and amazing book from start to finish!

What was one of the most memorable moments of Her Wicked Heart: A Cunningham Family Novel?

Stolen bottles of wine and a epic hedge maze.

Lou all over Ward when she first runs into him.

I really enjoyed this unique book!

Since I DON'T LEAVE SPOILERS.... I will say that YES I ENJOYED THIS BOOK in fact I enjoyed it much more then I thought I would!! I THINK THE NARRATOR really brought it to life!
My 3 things I ALWAYS TRY TO ANSWER ARE

1. WOULD I RECOMMEND THIS BOOK?
YES & I already have!!

3. IS IT WORTH THE CREDIT/MONEY??
ABSOLUTELY
SO WHAT ARE YOU WAITING FOR?? GRAB A COPY!!

STORY REVIEW......
The story was okay but I didn't like the lead female character at all. She was just rather needy and pathetic. I just could not relate to her at all.


AUDIO REVIEW......
I did not like the sound of this woman's voice at all. The tone and the delivery was way to annoying. It made the story hard to listen to. In fact I kept walking away from less listening to it. Making it seem like it took for ever to get over with.

*****Received this via audiobookblast in exchange for an unbiased review. ****
L. .

LOVED this book by Ember Casey in print and knew I’d love it in audio format too. However, the narrator’s use of different inflection and inconsistent accent was off putting. I still loved the story and will continue with the rest of the series, but this narrator didn’t capture the picture (or sound if you will) of Louisa.
Still a great listen, especially if you’re new to the series!

Great narration but Lou is something else

This is the second book of this series I have listened to, I still felt a little lost and still believe you need to listen from the first book to get the full understanding. I thought the book was good with a good plot. This didn’t have as many hot sex scenes as the next book in the series. It does have some surprises for a lot of people.
Ms. Goer as the narrator did a wonderful job. Her male characters were wonderful as well as her female ones. She puts a lot of emotion into the listen and gets better with each new audio of hers I listen to. I did not hear any background noise nor any place where the volume is higher or lower than the last. She has a smooth clear voice with lots of passion in it. You had not trouble knowing who was talking whether it was male or female each are clear, and clean voices. You were never left guessing what each character felt. There was no background noise just a clear pleasant listen. If any breaks where taken you could not tell. I look forward to listening to more from this narrator.

Some of the characters I really like other not so much. Lou is so wishy washer she knows what she wants but doesn’t. She thinks maybe she should go back to the guy she left but then decides not. She uses sex to get her through the tough times which has put her in the mess she is in. I do have to give her credit she is trying to change. She isn’t doing so badly for having lost everything she had but still needs to grow up a lot. I understand why she went back for closure I am unsure if she ever got it. Ian is something else you are left wondering how he still has a job after all he does. My heart really went out to him over the course of the book as his story unfolds. I couldn’t feel sorry for Lou I didn’t like her from the start but I did like her a little at the end. I am still unsure how she got away with some of the things she did. She runs to hot and cold for my liking

This is a story full of drama secrets that when they do come out will leave a lot of pain. This was an enjoyable read I did find a few things I really liked about the book. Most of the men in this story are just not the smartest things. I do not know why Ward hung on so long he had to have known she was using him. Ian for me was the best part of this story he stood up for his self telling the whole word what they could kiss not caring what anyone thought. If you like drama wishy washy women who uses men than this is the story for you.

I wouldn't necessarily change anything about the book but I would recommend reading books 1 and 2 first in order not to be lost. I didn't and I found it hard to follow along at points. What did her father do to lose the money? What was her life before this?

Predictable ... leads into book 4 which I had trouble getting into.

If Lou and Ward would have gotten to know each other before sleeping together. Yes, I realize that the whole running away/bad girl was Lou's way but I didn't care for it.

The narrator, Ms. Goer, did an adequate job with the narration but I didn't care for the book so I couldn't get into it.

I love the series.

Where does Her Wicked Heart: The Cunningham Family, Book 3 rank among all the audiobooks you’ve listened to so far?

I think it rates at a 3. I'm having to shift gears and read about Calder's
sister.

I liked the back story of the Cunningham Family.

Have you listened to any of Sarah Beth Goer’s other performances before? How does this one compare?

Sarah Beth is a great performer with this story.

Yes. I felt like I was experiencing
the sadness and anger and finally say good bye to her former
home and life. Louisa Cunningham is a really lovely character and
Read the rest of the series.

I was given this audio book free for my honest.opinion.

Narration - Sarah Beth Goer - Pretty Good. This is the second book I've listened to that Sarah narrated and she's getting better with each title she narrates.

Now the book? Well, I liked it. Did I like all the characters? NO! Lou (our heroine) about drove me off the deep end. She starts off by running from Ian and comes back to her childhood home under another identity to try to get a job. She's hired as the manager's assistant just as they are putting the finishing touches on the conversion of the estate into a luxury tourist attraction. She's JUST been hired and has barely made it to her room when she's got her tongue down another guys throat! OK, so that's not really what drove me off the deep end. She could easily be crowned the queen of Blue Ballsia! There are hmmm...I don't know...four, maybe five scenes where she's all over either Ward or Ian, getting them all riled up, ready to play hide the salami and she puts a screeching halt to it, telling them "I can't do this"

I never really understood what she hoped to accomplish by going back to her childhood home. She realized that there was nothing she could do to stop what was happening. She did engage in quite a bit of shenanigans of which I'm still uncertain how she wasn't busted.

I didn't realize this was the third book in a series, so it works as a stand-alone. If you like a lot of drama and some humorous shenanigans, then, I think you will enjoy this book.