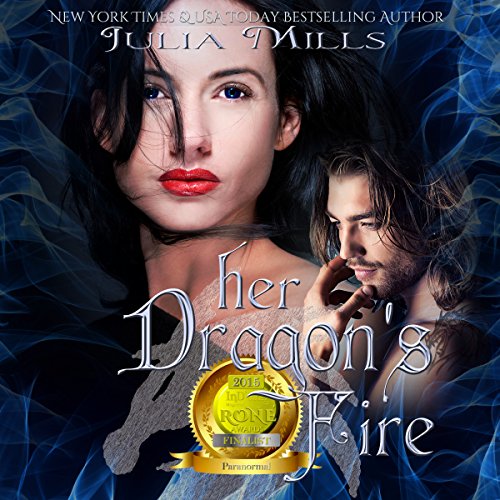 By: Julia Mills
Narrated by: Hollie Jackson
Try for £0.00

Her brilliant blues eyes and luscious curves have haunted his every thought for over six years. The guilt of his younger brother's death a weight around his heart, keeping him from claiming the one the universe had made for him and him alone. Aidan, a fierce Dragon Guardsman, now knows nothing was as he thought, and the woman he believed was unattainable is within his grasp, if only he can keep her safe from those that would use her to hurt him.

Grace is a successful lawyer, seeking justice for those that would otherwise be forgotten. Her incredible strength and intelligence make her a champion for the downtrodden. When she stumbles into a case that is so much more than she ever imagined, her very life hangs in the balance and the man whose scent sends her heart racing and her temperature rising is the only one that can keep her safe. Her life is irrevocably changed when she comes face to face with those hypnotic amber eyes.

There are no coincidences. Aidan will do everything in his power, including give his very life, to keep his mate safe. The universe does not make mistakes. Grace and Aidan are meant to be together, in this life and the next, but the forces both natural and magical that are sworn to keep them apart have been a step ahead of the Dragon Guard all along. Can these fated mates defy all odds and live the life that is their destiny? Fate will not be denied.

This book is part of a series but can be listened to as a standalone novel.

Warning: This book contains several love scenes and is intended for mature listeners.

What listeners say about Her Dragon's Fire

Too much high pitch ending at every sentence, I hope not all Miss Mills books are read by her.

I had hoped that this book would be at least a little bit better than the first book in this series but I think it was actually worse. I almost quit listening a couple of times.
I don't want to be mean but honestly I don't understand why this book has so many good reviews! It was a poorly written regurgitation of the same basic shifter ideas that have been regurgitated by hundreds of hopeful authors for the past decade or two. I'm at a loss trying to describe this story. Mediocre and 2 dimensional are the only words that come to mind. The two main characters were overcome with lust at the dumbest times. I did not enjoy anything about this book. The narrator was okay and worked with what she had but it wasn't much. I really don't know how a book this flat and generic got published. I feel after listening to two books in this series I have given this author a fair chance and now I'm moving on.

Will Grace and Aidan survive for their happily ever after?

Her Dragon’s Fire is the second book in the Dragon’s Guard series. When the case that Grace is working on gets tangled in with the man she can’t stop thinking about, Grace’s life is about to change in ways she could never have imagined. But just when she thinks she might find love with Aidan, danger strikes. Will Grace and Aidan find their happily ever after?

Oh my, I loved this book! I read this book a while ago, but loved being able to immerse myself into this world through the audiobook! Grace and Aidan stole my heart and the show with their action packed romance. I enjoyed Grace and her strength and her huge heart that leads her to protect the innocent. She was so brave in some scary times, and I liked how she used her wits to help, even if she got herself into the trouble to begin with! Aidan was so protective of Grace, but held so much inner pain and guilt from his past. I loved their connection and their relationship, and really enjoyed how well they fit together! Some of the drama and danger from this book follows well from the previous book, and I loved getting to spend some more time with the Traitor! Ms. Jackson did a great job bringing all of the characters to life and I loved her different voices! Overall, I thought this was a great book to read and listen to!

Love this authors books and after reading the entire series I was happy to listen to this book to get a slight refresher as well as hear how the author wanted the characters to sound like, compared to what they sounded like in my head

Loved the second book so much that I have already downloaded the third to start. Julia Mills write great strong female characters. These books as so entertaining and a great easy read and listen.

Grace is a successful lawyer, always looking out for the little guy. Aidan is her mate. He's part of the Dragon Guard and despite her logical brain not understanding they were meant to be together, Aidan won't let his baby brother kill her as an act of revenge.
The first struggle is to get Grace to accept and understand his Dragon, and it appears to be an up hill battle.

Hollie Jackson does a wonderful job narrating book 2 - with its mythical and magical elements.

This is a great series.

Aiden feels guilt for the death of his youngest brother. He knows Grace is his life Mate, but his guilt prevents him from claiming her.

Would you try another book from Julia Mills and/or Hollie Jackson?

She just read the story. Whisper Sync reads the story so why pay for an audio book ?

Her Dragon's Fire had the potential to have gotten a 4 star rating review from me. The story in itself was good with likeable H/H and decent amount of Actions and a nice Sexy, Sensual Romance between Aiden O'Brien a member of the Elite Dragon Guard and the beautiful intelligent Attorney Grace Kensington who is also, best friends with the Heroine Kyndel from bk.1 Her Dragon to Slay.

After a long hard late night's work at her office Grace decides to go stay at her best friends home which is closer to her job. Aiden is staying at Kyndel's home, she has married his commander of the dragon guard and they are looking for Aiden's traitor brother Andrew. Andrew got away from them in bk 1 and of course he gets away from them in this story bk2. After an enjoyable but cookie cutter story we are left with a Cliffhanger again. It was not to bad in bk1 because it was free from Amazon and I got bk2 for just 99 cents so that wasn't bad. However I will not be buying bk3 because any author worth there salt can end a book that's a part of a series without a Cliffhanger.

What did you love best about Her Dragon's Fire?

After reading this book I couldn't wait to listen to it. It is an amazing book with plenty of hotness and Hollie Jackson did a fantastic job of bringing these characters to life! One of my favorite audio books to date.

You can't go wrong with this audio book!

Would you consider the audio edition of Her Dragon's Fire to be better than the print version?

Great 2nd book of the Dragon Guards series. Grace stumbles across Aiden literally and her life won't be the same again. I loved the emotional pull of the story and Hollie Jackson's narrative of it is fantastic.

Laughed at times and hurt for Aiden at other times.