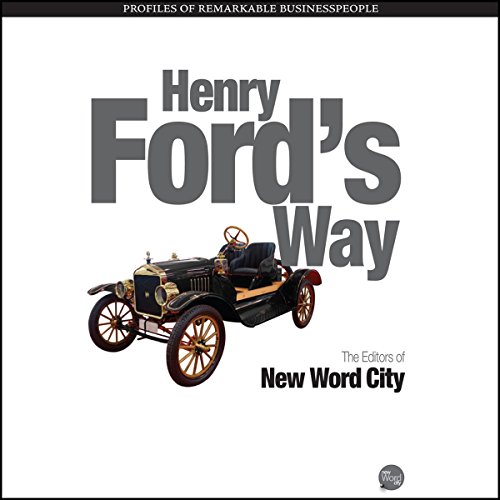 By: The Editors of New Word City
Narrated by: Suzanne Toren

Henry Ford's vision of a car for Everyman and a living wage for his employees created the middle class and forever changed America. But the deeply flawed genius got lost in his own new world. Among the lessons you can learn from his life: Make yourself stand out. If you find a diamond, don't throw it away. Don't neglect opportunities, no matter how remote. Understand your weaknesses. When you do recognize your mistakes, don't punish the world for them.

Henry Ford was far from the only inventor chasing the horseless carriage at the turn of the century, and it took him three decades after his encounter with the road roller in 1876 to roll out the Model T in 1908. Even then, he had to outmaneuver his financial backers to pursue his vision of building a car for everyone. Sooner or later, of course, someone else might well have done it. But the world is what it is because of Ford's patient, dogged determination. If you have a big idea, don't give up on it.

Over priced for just 40 mins

Could have got the off youtube. Total rip off price. How can this be sold as a product. Very upset