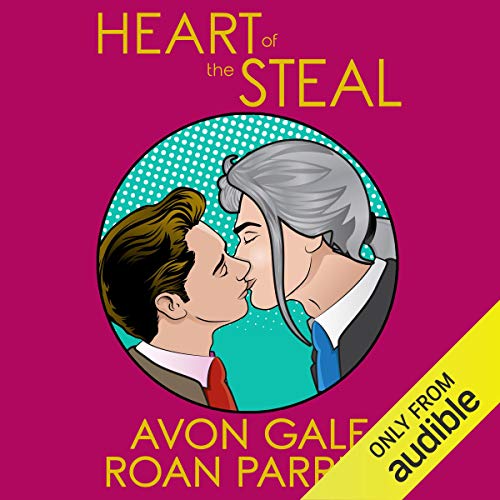 Heart of the Steal

Responsible, disciplined William Fox channeled his love for art and his faith in the rules into being an FBI Art Crimes agent. Right and wrong, justice and injustice - the differences are clear, and Will has spent his career drawing a line between them. Maybe his convictions have cost him relationships, but he’s not willing to compromise what he knows is right. Until the night he meets Amory Vaughn.

As the head of his family’s philanthropic foundation, Vaughn knows very well that being rich and powerful can get him almost anything he wants. And when he meets endearingly grumpy and slightly awkward William Fox, he wants him more than he’s wanted anything. Vaughn is used to being desired for his name and his money, but Will doesn’t care about either.

When Vaughn falls back on old habits and attempts to impress Will by stealing a painting Will admires, their nascent bond blows up in his face. But Vaughn isn’t willing to give up on the glimpse of passion he saw the night he took Will apart. Before Will knows it, he’s falling for the man he should have arrested, and Vaughn has to realize that some things can’t be bought or stolen. Love has to be given freely. But can a man who lives by the rules, and a man who thinks the rules don’t apply to him, ever see eye to eye?

Heart of the Steal is a standalone romance with a happy ending. It features a Southern gentleman who thinks he’s always right, a buttoned-up FBI agent who secretly likes his buttons unbuttoned, and wall sex. And desk sex. And picnic blanket sex.

What listeners say about Heart of the Steal

I never wanted this book to end! The story was warm and sweet, the characters interesting and loveable and the narrator has a voice that made me feel warm and snuggly. Great book!

The beginning made me stop.

Not gonna lie, about an hour and a half into this story I stopped reading it.


I found it unrealistic that Will is this work-centric man and law-abiding yet he gets off for 5 minutes with a random stranger and is suddenly willing to cover up crimes for him?
I feel like if it was stretched out more, let us see them truly get to know each other instead of seeing them talk about how much they love each other when they met like 2 weeks ago and then I could understand William wanting to protect Vaughn from the law. But seriously, I couldn't take Will seriously after that. He's built up as this serious man who's determined to protect art, yet now all I can think about is "well if you suck his dick he'll let you go"

I ended up finishing the book because when I exchanged it for another I forgot to download that one, and working in a warehouse I had to listen to something for my 10 hour shift. So I grudgingly finished it. I liked it. It was cute. More in a fanfiction-y way than an actual novel.


The voice actors are pretty good, except I HATED when they would voice the other character during their chapter. Will's narrator when he imitated Vaughn's drawl made me cringe, and vice versa with Vaughn's narrator, although I grew to like his towards the end.


All in all, book felt really rushed. Could have been a lot better if more played out, stretched out, if we could really feel the transition in feelings, and not just jumping to "they fucked now they're in love".

I just couldn't respect or take serious Will's character after seeing the contrast of his described loyalty to his job to his opposite actions, he felt very weak and like a pushover, so I feel like the author really kind of did him dirty.

Im not much for books with multiple narrators, but how am I supposed to resist when 2 of my absolute favorite people do it together?
I really liked the story, both Iggy and Kirt were perfect for there charachter and I really enjoyed there performance. Thou I must say I prefered Iggy Tomain this case, he just has this way of highlighting moments with his voice and since he had more chapter than Kirt Graves I found myself suprised at times when the narrator changed.
This is probably the first dual narration I have actually not hated haha! Defenately gonna listen to it again.

I’m usually pretty iffy about dual narrations. It’s annoying when the narrator use different pronunciations and accents. I was a little nervous when I heard Kirt’s accent for Vaughn since I’ve never heard Iggy use the same cadence but the nervousness was for nothing. Both narrators knocked it out of the park with this one. The sorry was very interesting and held my attention the whole time. There are no big bad guys or super crazy action scenes. It’s just a story of two unlikely men falling in love and figuring out how to mesh their lives together.

I really enjoyed the story and narration made it even more enjoyable. The story was funny, sexy with good character development. Worth the credit for sure.

OMG I loved this book. The rich guy and the "clumsy" guy. There were amazing together. Yeah some aspects of the story sounds unrealistic but then why are we reading/listening book other than to escape reality? William is just adorable in my opinion. And Vaughn with his long silver hair is just dreamy. Having been born rich he doesn't know how the regular folks live. His surprise at the lack of millions threads sheet in a hotel room was just out of this world.
There is a healthy dose of humor. And the dual narration worked wonders here.

With the imminent demise of Audible Escape, I find myself checking to make sure all the audiobooks I had semi-interest in had been listened to before the end of the month. This one spent lots of time on and off my wish list but I decided to chance a listen today. I listened in one sitting...and while normally I can do other things while listening, I found myself glued in place the entire time (and yes, my productivity for the day completely shot). I’m not even sure how best to describe this. While a little slow burny in the beginning (at least to the relationship part, that is) and not a whole lot of excitement happening over the course of a few months, this audiobook had me completely enamored. It was witty, humorous at times, and not flooded with angst...and yet, I think what really sold me was how well Will and Amory worked as a couple. Amory was a Southern ray of sunshine that one could not help to love and totally meshed perfectly with Will’s rigid rules. I loved their chemistry so much that I didn’t even mind the angst that was in the book. They just...fit. Parrish and Gale outdid themselves with this one. The narrators were absolutely spot on for both characters and it was probably the best performance I’ve heard from Iggy Toma, hands down. So, not only did I knock this off my “list,” I’m adding it to my other “list” of previous Audible Escape audiobooks that I must purchase to have in my library for all time. One of the best all-around romances I’ve had the pleasure of listening to in quite some time.

Wasn't Ready For It To End!

I just adored this book. I stumbled upon it because of Iggy Toma, who gave a fantastic performance as usual. But Kirt Graves blew me away! Unlike some reviewers, I loved the old timey southern accent for Vaughn. Do people still talk like that in the real world? Maybe not. Do I care? Nope. It was delightful to listen to and made me chuckle. Toma and Graves did a good job of matching their narrations for the MC's, which you don't always get when there are two narrators.

Now, if you are looking for an art heist book, this isn't for you. There isn't actually much of that here, which made it a little more realistic for me (but again, I read fiction books as just that--fiction! In a fictional world, a cop can fall in love with a thief and they will live happily ever after and I'm happy with that. Real life can just go away while I'm reading/listening.) But what you do see here is a cute love story where the MC's grow as people and learn to live with each other. And they learn to love a kitten, which is too adorable. I was disappointed when the book ended, because I could have just kept listening to the adventures of William and Avery forever. But eventually it would have gotten boring, so I guess it's good it ended when it did.

I love Iggy Toma, and his narration is what led me to this story which was truly wonderful. No cliches, tropes, or insta love. A true love story that wasn't sappy yet somehow sweet in the way these complex and terribly human characters came together. It was so enjoyable to listen to such a quality story in this genre.

I was happy with the pacing and the love scenes. Narrators did a great job. The characters were well balanced and I liked that they didn't fall into cliched rolls.

Two totally opposite minds, finding true love by understanding the Truth: there is no such thing as Black & White, life or in relationships. It is the multitude of color & spices, gently mixed together that truly make life worth living.
Heart of the Steal reminded me of this Truth.