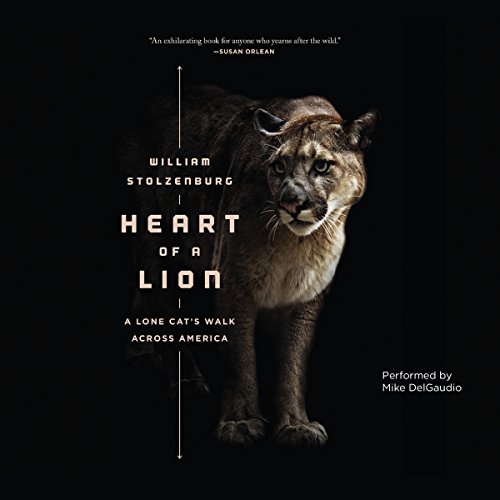 Late one June night in 2011, a large animal collided with an SUV cruising down a Connecticut parkway. The creature appeared as something out of New England's forgotten past. Beside the road lay a 140-pound mountain lion.

Speculations ran wild, the wildest of which figured him a ghostly survivor from a bygone century when lions last roamed the eastern United States. But a more fantastic scenario of facts soon unfolded. The lion was three years old, with a DNA trail embarking from the Black Hills of South Dakota on a cross-country odyssey eventually passing within thirty miles of New York City. It was the farthest landbound trek ever recorded for a wild animal in America, by a barely weaned teenager venturing solo through hostile terrain.

William Stolzenburg retraces his two-year journey - from his embattled birthplace in the Black Hills, across the Great Plains and the Mississippi River, through Midwest metropolises and remote northern forests, to his tragic finale upon Connecticut's Gold Coast. Along the way, the lion traverses lands with people gunning for his kind, as well as those championing his cause.

Heart of a Lion is a story of one heroic creature pitting instinct against towering odds, coming home to a society deeply divided over his return. It is a testament to the resilience of nature, and a test of humanity's willingness to live again beside the ultimate symbol of wildness.

As a 25 year resident of South Dakota's Black Hills I was amazed to hear the story of the mountain lion and his journey across America. I would see 2-3 cats a year on my daily walks - they were majestic and beautiful - always quietly retreating away once discovered. This is a story worth hearing.

An unimaginable journey made by an incredible hero

Definitely recommend for those wanting to understand more about the population biology and natural history of one of the most widely distributed mammals in the world. Tales of fierce predatory behavior punctuate this cat's true nature and malign it with those who need to share space with it. This book is a genuine compilation of accurate information about an elusive and successful wild predator, one we should be working diligently to protect and restore to its once grand status in the Americas.

Riveting not for casual reader or feint of heart

Eye opening, heart breaking, terrifying human culture that so judges living creatures solely from a human Center of the world view . the The lions ecology is as awesome and powerful as the are. Its a page turner and Will created a story that you both wonder and fear what next befalls this species. He eloquently brings the reader to understanding the problem and rooting for the lions. A must read for anyone interested in the environment or conservation biology parts a painful to read, but keep at it as he masterfully weaves this real story. Reading the book reignited my passion to get involved and try do to something. I realized why I started my career in the wildlife biology career

I loved this book. It makes you understand the mountain lion, myths and truths, and ignorance of men.

The title is a weak excuse for this book. This is not really the story of one cat, but a bigger story of Lion's in America. Unfortunately, the premise gets very much in the way. What could have been a broad and deep examination of this incredible apex species get's bogged down in the details of a few symbolic lions and the petty humans who just happened to have crossed paths with them. I really enjoyed the half of the book dealing with the big story, but was bored by the petty details of the humans who interacted with them and was ultimately disappointed by what is not included.

Using the "Connecticut cougar" story of 2011 the author make a very strong case for bringing back the eastern US cougar to control deer populations which are damaging our forests (and motor vehicles). The book also makes the case that cougars are not natural human predators.

While the writer was extremely well versed, descriptive, & engaging, he did NOT CONVINCE ME, being a career Park Ranger, lifelong biology student, and avid follower of Jim Corbett (MANEATERS OF THE KAUMON ) that the mountain lion can live beside mankind. They need a space of their own, such as a very vast reserve, or, more practically an island managed with deer or other animals of predation.
They cannot live in urban areas even though some have survived a while, as the one in Griffith Park.
It is not, in my personal opinion, worth the risk of "profound injuries " or death of innocent lives to coddle and harbor large carneviors beside human beings unless aiming for some benign form of human & animal population control.
Those who disagree with me need only take into small consideration the many harrowing attacks throughout history.
Would you like your family members to suffer the agonizing fate of a school teacher on a trail in Cuyamaca Rancho State Park, or a lady horseback riding near Auburn Reservoir, or an Orange County bicyclist?
These magnificent creatures, as the Grizzly Bears, must have a safe, "WALLED" place of their own, or be destined to survive only in zoos or private facilities that can afford to house them naturally & with compassion.
Aside from this conclusion, I have found this excellent book to be one of the most interesting and comprenhisve, including the sadder fate of the American Bison, and the Native American tribes, who often make me wish I were born in CA about 12,000 yrs earlier, yes, in the time of the Wooley Mammoth!

The Book You Didn't Know You Wanted to Read

This is the book you didn't know you wanted to read or needed to read. It tells the tragic tale of a young male mountain lion's record breaking trek across America, all in search of a mate. His daunting journey is made all the more dangerous as he runs the human gauntlet of civilization and human misplaced fear.

The story is told all while painting a vivid picture of the world that mountain lions find themselves in and their history of persecution; the depressing world of man's genocidal hunt of the mountain lion to near extinction and their irrational fear of the creature that has kept the species from possibly ever recovering. I never realized that my own unfounded fears of the cats, backed by nothing but urban legends, has helped to perpetuate the heartbreaking fight for survival of an otherwise peaceful and misunderstood animal. Of all predators in America they may be the one most valuable for saving our ecosystems and shepherding them back to health. Their nomadic and aloof nature would otherwise lead to next to zero encounters with humans and a peaceful cohabitation of this continent, and I hope this book can open readers eyes - as it did mine - to help protect and defend this beautiful and desperate animal.

Although the facts and science are excellently backed in this book, it is taken to the next level as the beautiful writing connects you to the inspirational souls of the mountain lions. Skillfully and inspirationally narrated, this was a book I eagerly looked forward to getting back to and getting saddened and inspired by every day.

After reading this book, watch PBS's Nature episode 'India's Wandering Lions'. You will see how ridiculous we look. Their ancient culture got passed fear and now lives with lions in a symbiotic partnership of mutual benefits. This show blew my mind.
http://www.pbs.org/wnet/nature/indias-wandering-lions-full-episode/14114/

It is about the mountain lions of America. Now if any of these subject interest you then go ahead and listen to it. I don’t know why I read it but I liked the book nonetheless.

It did show me the plight of these animals at our species hands and the butchery that still goes on in so called developed nations in the guise of the euphemisms provided by the English language.