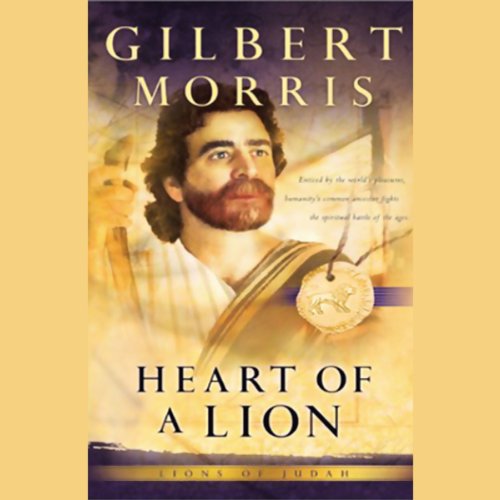 The world is spiraling toward destruction, and one man receives a divine mandate.

Young Noah has found life good and wholesome, until he steps outside his village and discovers a world of temptation. Drawn by a beautiful woman, yet repulsed by the pagan practices of her tribe's dark worship, his inner struggle keeps him in torment.

Noah strains to hear the voice of God, through the warnings of a prophet, through the kind teachings of his grandfather Methuselah, through the loving concern of his family, and ultimately through personal confrontation. The message he receives is terrifying. Will he find the courage to obey?

Opposition intensifies to the call he has received, but a precious medallion handed down from ancient times reminds him of who he is, a man with a heart of a lion.

What listeners say about Heart of a Lion

This was simply fantastic! I wish Audible had more books by Gilbert Morris but since they don't I am reading them in paperback. His writing is just Fantasyic!

This is a beautiffuly written account of Noah's life; it tells a beautiful tale of Noah's struggle and determination to remain faithful to God despite his weakness. And the narration is superb

The beginning of an amazing partnership and love

I have always loved the story of Noah.
It was an exciting, miraculous story
of how the good guys win and the bad guys
won their just deserts....
As I became older, the concept of justice and
mercy made this story more complicated and
this is what I appreciated about the "Heart of a Lion".
It was a hard thing for a human man to comprehend the working of the Creator. The difference between how the mind of God and the mind of humanity saw good and evil, happiness and safety, and yes justice and mercy.
Noah looked for the heart of God and so developed a steadfast (great old word) trust in Him.
The old story unfolds with fresh heart wrenching yet heart warming twists. The characters are all neighbours, friends and family. Real hearts and minds are involved, for good or ill.
It made me appreciate the confusion man can come to without knowing (in the real sense) a different supreme Being.... Someone who doesn't think like a human, but very, very clearly.
What does that look like?
It's hard, but He is good.

It was great to meet Methusalah and hear his take on his dad Enoch...how his long life impacted on the next generations, especially Noah. It was so much fun.
Aso, I loved the concepts of the new, primitive world, close to creation, fallen, yet amazing.
It was so plausible, even probable and I really enjoyed it.

I really enjoyed this book. I liked the reader, too. It's interesting and I will now go read the real story of Noah and see how much is real and how much is make believe.

The title is deceiving, it doesn't make you think of story of Noah. As the story unfolds you forget the title and begin to travel to a time that sounds a lot like today. I can't imagine the weight of the assignment Noah was charged to carry out. This story is clear and colorful, great job!

This book gives an excellent view of what Noah's early life might have been like. Who knows how close this author may have come to the realness of his life. He was human and did live a natural life in his allotted time. Great man, great man of God, Great listening of how it could have happened for him. I loved this book.

I love this book. It pulls you into the history of the story. You really feel as you are there with the struggles. This is a series I read over and over like I read it the first time!

This was an excellent book. It made me feel like I was part of the story.

Considering Noah as a bronze age cave man is a new idea to me but probably accurate. The story was OK but somewhat disjointed and childish.