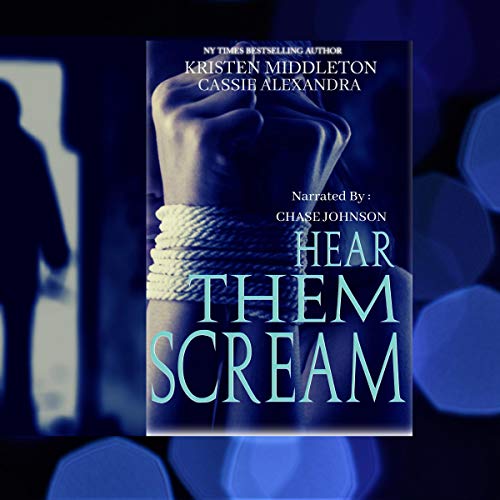 Ready. Set. Die...but not before you scream your pretty little head off....

A serial killer obsessed with recreating old horror movies.
A young woman determined to find out who killed her twin.
A small town that can’t seem to catch a break.

Whitney Halverson's world is shattered when her sister, Brittany, is found murdered in Summit Lake. Unfortunately, the police have no leads, and the killer is still casting for several roles, including the one her sister didn’t scream loud enough for. But now that Whitney is in town, there’s an option for a re-take, and the killer is determined to get it right this time....

The Summit Lake Thriller series can be listened to in any order. No cliffhangers.

This mystery thriller will have you on the edge of your seat until the final chapter. Fans of Lisa Jackson, John Sandford, Karin Slaughter, and Harlan Coben may want to check this mystery series out.

What listeners say about Hear Them Scream (A Gripping Crime Thriller)

I enjoyed this book, it was easy to listen to. Not too gory but still providing you with enough to be able to imagine more. I loved the characters, some twists and turns, some predictable others more surprising. Characters were great to get to know. Narration was smooth and easy to listen to.

The memory of my mother.

Whitney had planned to meet her twin sister at the lodge they'd rented by Summit Lake. But when Brittany failed to phone to let her know she'd arrived, Whitney was worrked, especially after finding her sister's abandoned bag and cell phone, and she called the police to later hear of the body of another young woman found not far away. Had Brittany been taken by a vicious killer? The story is told in the first person, from several perspectives, in particular that of Whitney and the killer. The narrator, Chase Johnskn, was good, pacing his reading well if a little slowly, easi!y solved by turning the playback up to 1.25. His voicing of the various protagonists was distinct but, given that the narrative was divided between male and female characters, it would have been preferable to divide the reading between two separate voice actors. Indeed, it was initially confusing as Mr.Johnson, reading in the first person but with no name attatched, turned out to be a woman. From the initial cheesy chat up chapter, the story felt unreal, more Hollywood than actual. There were some good family togetherness sections but overall it was more silliness than horror thriller even with all disbelief suspended and not a book that I would recommend. It might be tweaked into an intriguing film, however, given it's cinamagraphic back story. My thanks to the rights holder of Hear Them Scream, who, at my request freely gifted me with a complimentary copy via Audiobook Boom.

A slow start but quickly picked up the pace and didn't stop! A great listen with twists and turns and great characters. I was given this free copy if this audiobook on my request and have voluntarily left this review

Story was great, narrator was confusing

Audiobook Review - For the second book in Kristen Middleton's Summit Lake Thriller series we have Hear Them Scream. I actually thought this book and the evildoer were very unique. Even though we have a completely different story than the first in this series, the author did a good job weaving the same characters from the town into the second story and keeping them to their already established rolls without it going too far like in romance genre books. In Hear Them Scream we have a killer that has dubbed himself "The Director" and picks women up to have them star in his own remakes of classic horror movies but unlike the originals that he deems has bad acting, here he will reenact the most memorable horror scenes in real life and sell the remakes online as "more authentic"; which they actually are. When he's done with the "movie", he dumps the body and then onto the next but when one of the missing girls has a twin sister who won't stop until she finds out what happens, everyone is placed in danger when she comes to town. What I love about the Summit Lake Thriller series is that they feature everyday strong women who never give up but use their brains to figure out how to solve the crime or situation. The individual women featured never just roll over and take it or wait for someone else to solve the crime. They think their way out of each situation to survive. That being said, what brought this one down for me was the narrator. The story is told from multiple POV's. Even though he did a great job going in and out of different characters and changing his voice, when it came to the women though, he used his normal male voice sometimes for a woman and therefore it was hard to tell which character was taking the stage. For example, he would use his normal male voice for a female narration while in her head but then raise his voice when she was actually speaking to someone. It just became very confusing. Usually if a female character is in her head or speaking out loud, it's the same octave or voice. It ultimately kept taking me out of the story until I could figure out who was talking and then he's say something like "she or her" or even use the characters name and I'd be like oh ok it's this character but it was super disconcerting.

I liked the story

I liked the story but did not care for the narrator on this one. I was very impressed with Whitney's actions that helped her escape. I also knew that Lillian was a bad egg right from the start. Glad to see she got what was coming to her. Definite thumbs up.

A serial killer is obsessed with recreating horror movies and hearing his victims scream. A girl does whatever it takes to find out what happened to her sister.   The story was fascinatingly dark. I liked hearing the perspectives of the good and bad sides. Kristen has a way of describing the scenes and characters so vividly you can actually see the story playing out while listening to it. Very well written.   Chase narrated well with good suspense and energy in his performance.   I recommend this book and I look forward to hearing more in this series.   Note: This book was given to me for free at my request and I provided this objective review voluntarily.

A serial killer obsessed with recreating old horror movies... A young woman determined to find out who killed her twin... A small town that can’t seem to catch a break... A gripping, obsessive and addicting thriller that will leave you on the edge of your seating, panting for more. Wow...so good. The narrator was brilliant.

I have to admit this is my 1st listen by author and enjoyed it. It does have some horrific scenes and a surprise of who the killer was. My favorite characters were Uncle Rocky and Whitney. It is not for the faint of heart. I was given this free review copy audiobook at my request and have voluntarily left this review. Thank you