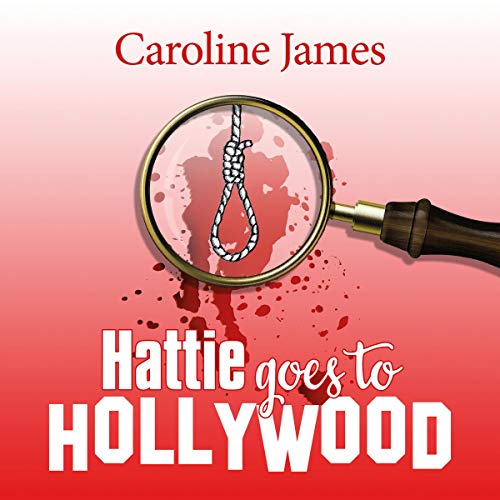 By: Caroline James
Narrated by: Gill Mills
Try for £0.00

Join super-sleuth Hattie as tempers and temperatures rise in the Cumbrian village of Hollywood. With mischief and shenanigans aplenty, will Hattie discover the truth?

A funny and intriguing mystery - the first in a new series by Caroline James.

When recently bereaved Hattie Mulberry inherits her aunt’s dilapidated cottage in the village of Hollywood in Cumbria, she envisages a quiet life. But retired hotelier Hattie is bored and when her neighbour asks her to investigate a suspicious suicide, Hattie’s career takes a new direction and H&H Investigations is born. During the hottest summer for years, Hattie discovers there have been three recent suicides in Hollywood and she determines to find out why. Temperatures rise as she throws herself into village life and, with mischief and shenanigans aplenty, Hattie has her work cut out. But will she establish the truth?

Hattie Goes to Hollywood is the first is a new series of stand-alone books by Caroline James.

“A highly enjoyable book in a brand-new series, I am loving this cast of characters - 5 stars!” (Rachel’s Random Reviews)

What listeners say about Hattie Goes to Hollywood

Caroline James is a new author for me and this genre is a bit of a departure as I usually prefer my books to be a lot darker than this. But it was billed as similar to Agatha Raisin and I know lot of people who enjoy those so I thought I would give it a try

I wasn't disappointed in the story. Caroline writes well and has a great eye for detail. I can imagine that if I had ever stayed in her hotel - she would have known everything about me before my suitcase hit the bed!

The characters are your typical village folk and (as I live in a village) it is possible to recognise several 'types' from amongst the folk who inhabit her fictional village of Hollywood. It is quite funny in parts and I found myself chuckling away as I listened.

I liked the beginning when she's settling in and meeting everyone best. It was a great listen for these strange times that we're in - I listened during lockdown in April/May. It took my mind off the situation we're in very nicely.

Caroline James is a new author to me, but I really enjoyed this first book in a new series featuring amateur sleuth Hattie Mulberry.

Hattie is quite a girl! Well actually she’s a 50 something year old woman but she’s a real character. Having been left a cottage in an aunt’s will she moves to the dilapidated cottage in Cumbria and ends up investigating the supposed suicide of her neighbour’s husband.

The village of Hollywood is full of interesting character but I fell in love with just one – the wonderful Drake! I’ve never met a duck character in a book before and each section featuring him was a joy to listen to.

This is a quirky, cosy murder mystery and if you’re a fan of Agatha Raisin you’ll love this. But this series is better because it has a duck!

good start to a new series

I really enjoyed Hattie Goes to Hollywood, the first book in a new cosy crime series by Caroline James.

I was immediately swept up in the story andthe characters and raced through it in double quick time.

Hattie is a great new character to follow andthe supporting cast, including the duck added to the fun of the story.

I'll definely look out for more books in this series. lastly, a word on the narrator, Gill Mills who was perfect for this book and added something extra to the experience for me. she really captures hattie to a tee and I hope she's used for future books.

A brilliant start to a new series. I thoroughly enjoyed Hattie’s adventures settling into Hollywood and setting up as a private investigator. I want to go and live in the village. Really looking forward to the next instalment. Oh, and I love the duck!

A fun read following the adventures of Hattie when she moves to Hollywood. Fun, frolics and mystery follow Hattie around as she investigates a suspicious death for her neighbour. With a few surprising twists, the story comes together. The village is full of characters and stories, and a few animals as well. I especially loved Drake. It was a really easy, enjoyable, light-hearted read and I hope Hattie has some more adventures in the future.

I enjoyed this story. I listen & read quite dark books & though this is an investigation & detective book it’s a lighter style.
I liked the escape and different style and will be looking for more by this author.
Narrator was good too

What a great little number this is more of a Miss Marple type and that phase was also mentioned in the book Hattie recently bereaved and auntie has left her a cottage in a village called Hollywood in Cumbria, somewhat dilapidated but liveable, and Hattie soon immerses herself into village life and her next-door neighbour wants her to investigate a suicide but is it suspicious! and as Hattie starts to investigate she finds out there have been 3 recent suicides hum dodgey! Hattie is fiesty outgoing and sensitive and somewhat nosey and able to speak her mind. The characters in the book are well defined and each one has their own personal foibles, Hattie and co. love listening to village tittle-tattle how else would she be able to investigate, and has fallen for the landlord of the local pub, clever what better way to hear the gossip with a G & T in one hand and big ears. This is a light-hearted cozy mystery and the narration is good and clear and would love to listen to more of Hatties escapes, as I'm sure there will be.

Welcome to the world of Hattie

I really enjoyed this audio. If you are a fan of Agatha Raisin on tv you will love this. Hattie is a formidable woman who’s new life in Hollywood (not the glamorous one lol) is only just beginning as she works hard to get her new home ready to live in when she gets asked to investigate some unusual suicides that have happened in the village. Is there someone in this small village bumping off residents or are these deaths exactly what they seem to be. Hattie is a warm and strong female lead who I was instantly drawn to. She feels like a friend and I could see this on tv as an on going sitcom. I look forward to the next book.

Fun, friendship, and an intriguing who done it!

Just finished listening to Hattie Goes to Hollywood....so sorry it’s ended! I feel like I know all the people in this beautifully written and well narrated story of life in a Cumbrian village. I love the Agatha Raisin books, but I think Hattie could even give Agatha a run for her money in the detecting stakes! What a wonderful character Hattie is. She’s so likeable, I just want to tuck into one of her bacon butties, or huddle down with her and a G’n’T for a good old gossip. The plot is unusual, three “murders” to investigate, but Hattie gives it her all, accompanied by some wonderful characters and the amazing duck, Drake. If you’re stuck at home and need cheering up, this would be the perfect listen. I also laughed out loud at times and was kept guessing right to the end. Another winner from Caroline James.

Thought I would try this as it is the start of a series & the previous reviewer gave it a positive review & Caroline James is well liked by others. However, it is not for me ... as there is limited depth to the writing/story and the narrater didn’t seem to fit. I lost interest very quickly.

Village life and intrigue in Cumbria

Hattie inherits a house in Hollywood from her Aunt, and moves back to the district of her youth, after the death of her husband. On arrival a friend suggests she get a job, and she sets up a PI company to investigate the suicide of her neighbour's husband. She uncovers 2 more suicides in the village that could possibly be linked. The character building is lovely, and you are drawn into the affairs of everyone in the village as the mystery unfolds. The story is solid from beginning to the last words, and holds many laughs. I really enjoyed this one and, can't wait for the next in the series.

Hattie Goes to Hollywood by Caroline James first grabbed my attention by the title, then the blurb and then sample. This is a very good cozy mystery with some quirky characters. I loved the imagery, and could envision so many details by the descriptions. Gill Mills brought the characters to life with her voice. This book is a standalone listen and the start of a new series. I will definitely listen to more by this author and narrator.

This is the first time I've read a Cozy Mystery and I thoroughly enjoyed it. This was the perfect escape read during this crazy time. The characters were great and exactly what you would find in a small town. And even though the mysteries were, for the most part, a bit predictable, I really enjoyed this book and would definitely read more of Hattie's adventures in the future.

A strange start to the book and I was concerned if I would be able to finish it, but it developed well and in the end I enjoyed it. Small village, lots of gossip and everybody sticking their noses where they don;t belong, and in the end enjoyable

This was such a fun story! It had the twists and turns and unexpected finish of any good Amateur Sleuth tale. The characters were well developed and easy to like or dislike as the story progressed.
But the Handsome Drake caught my fancy. Every single time that Duck quacked I chuckled. And his quirky heroism made me dream of having a pet Quacker!
The narrator was great! I truly enjoyed her performance. I will definitely seek out more books in this series!

I simply read the title and figured that this book would be about a woman from England going to Hollywood, California. Once I got listening, I had to laugh at myself. There is more than one place with that name in the world with that name.
This story is about a woman who inherits a cottage from her aunt after she had lost her husband. She decides to move there and start a new life .. Her new neighbour puts her on the path of being a private investigator by asking her to find out the reason for a mysterious death. Soon all sorts of secrets are unveiled and the new PI is started on her career. I really enjoyed this book with its mixture of mystery,, romance and funny parts..
The narration was good and I would recommend it to everyone..