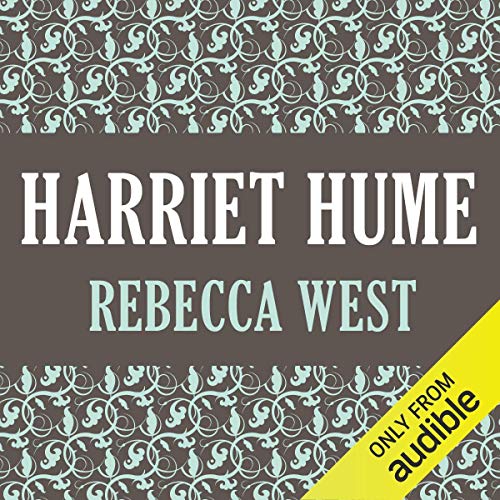 Of all the women he had ever known she was the most ethereal. Loving her was like swathing oneself with a long scarf of spirit. Harriet Hume, musical, mystical and whimsical, is the very essence of femininity- both princess and trollop.

Her beautiful room in a dilapidated Kensington House is the setting for this love story, she herself an extension of the beauty which surrounds her. Here amidst trees and lilacs, Arnold Condorex comes to be loved. And love him Harriet does, beyond reason.

But Condorex is a man bent on power and Harriet is a woman with powers of quite another kind. In ruthlessly pursuing his ambition, Harriet- his better self- must be cast aside...How Harriet slowly triumphs over Condorex is gradually revealed in this beautifully imagined fantasy.

Hariett Hume, Rebecca West's third novel, recounts the victory of love and the love of beauty over man's eternal quest for dominance and destruction. Written in a style as elegaic as the London it also celebrates, Rebecca West's wisdom, imagination and wit are triumphantly brought together in this, her third novel.

Dame Rebecca West, DBE (1892 – 1983) was an author, journalist, literary critic and travel writer. A prolific author in many genres, West was committed to feminist and liberal principles and was one of the foremost public intellectuals of the twentieth century. She met H.G. Wells in 1913, after her provocatively damning review of his novel Marriage prompted him to invite her to lunch.

They fell in love, though Wells was married at the time, and their affair lasted ten years producing a son.

In 1947 Time magazine called West, ‘indisputably the world’s number one woman writer’ and in 1954 Kenneth Tynan described her as, ‘the best journalist alive’. She was made CBE in 1949, in recognition of her outstanding contribution to British letters.

"One must conclude that the greatest living example of a woman... who has been both a thinker and an artist, and who has managed over some sixty years to express a spacious sense of reality, is Rebecca West." (Samuel Hynes, TLS )

Creepy but hard to put down

You have to suspend disbelief pretty significantly in the beginning, which is admittedly hard for me when it comes to the supernatural (in this case psychic powers), but after you get through that, you get a creepy story about one man's high ambitions and increasingly low character and descent into obsession and madness. Harriet is not so much a full fledged character as a kind of mirror in which Arnold is reflected. In fact, in some ways she serves the main character in the same way the portrait does in the Picture of Dorian Gray.

I didn't always love the way the narrator voice Harriet (struck me as too simpering) , but overall I found this to be a creepy, enjoyable, and very engrossing tale.