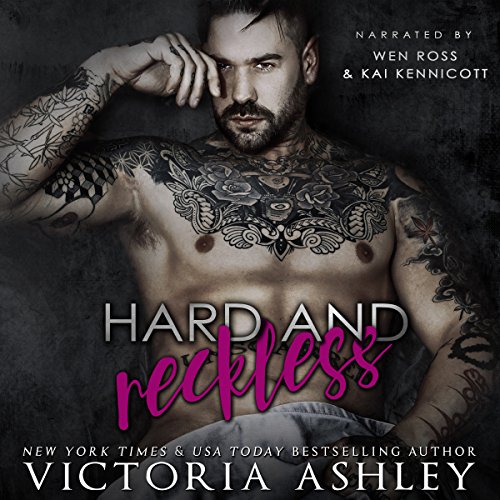 By: Victoria Ashley
Narrated by: Wen Ross,Kai Kennicott
Try for £0.00

Cole King...the name alone leaves a bad taste in my mouth, a reminder of how he broke my trust in the worst way possible.

He had my back and I had his.

Until he crossed the line.

Now visions of him sinking between my girl's legs, making her scream in all the ways only I should've been doing, haunt me, mixed with images of all the ways I can rip his damn throat out.

I've tried to forget it and move on, but I can't.

Ways to inflict even just a small portion of the pain he made me feel f--king consumes me.

Somewhere in his fucked up, twisted mind, he thought it would be okay to share my girl.

Hopefully she can handle both of us, because I intend to make Cole work for her.

The hard part will be making sure she falls for the right one in the end.

At least, not until I get a taste of her.

That one touch alone is enough to change the f--king game.

What listeners say about Hard & Reckless

This book was amazing, it drew me in right from the start and held me captive straight to the end. Victoria Ashley is a gifted author, her descriptive writing brings you right along side the characters, seeing what they see and feel. Jameson and Cole have been friends for 20 years, they work together at the club and are like brothers. That was until Cole did the unthinkable, he screwed Jameson’s long time girlfriend. Jameson dumps her and plans on getting even with Cole to get his betrayal out of his system. Cole has it bad for Brooke Collins but when she sees Jameson she sees something she likes. Cole knows what Jameson is playing at so he plays along and they both give Brooke the ride of her life. But is that enough for them or will they want more rides. I loved how everything plays out in this book, it is plotted out nicely and there is never a dull moment with plenty of drama, some angst, some heartfelt moments and some great smoking hot sexy times. Victoria Ashely, thank you for this awesome story!

Wen Ross and Kai Kennicott are awesome narrator and voice artists. They do an amazing job portraying the characters, bringing them to life, giving each their own voice and personality. You could hear how much heart they put in to their work, their duet performance captures the chemistry between the characters, their passion as well as their emotions which enhances the story even more. They are entertaining storytellers and a pleasure to listen to. Thank you for another awesome listen🎧

This was a very Sexy book with very grafick sexscenes. The book is mostly about to people in love but there are one scene where treesome , so be prepared to that

Holy hell! I need a Jameson in my life! I cannot wait to see what other books come out. I need to read more about Dean so I don’t hate him as much and I’m praying there’s a book on Rowdy & Carson 🙏🏼

What happens when a woman comes between a 20 year friendship? You get even! But what happens when history repeats itself? Jameson and Cole have been friends since they were kids. It has never been an easy friendship between two very hot and sexy bad boys but it works. When Brooke finds herself in the middle of their games, she is ready to play. But soon the tables will turn and being Hard and Reckless isn't enough to protect anyone's heart.
Wen Ross and Kai Kennicott's narration was smoking hot.They brought out the playfulness, the angst, and the steamy passion of this story flawlessly.
If you are looking for a quick, heartfelt, sexy story, then you should definitely give this a listen.

Victoria Ashley gave us one drool worthy book here~ Once you open Pandora's Box, you can't go back. The scenes is this book were hot enough to scorch the pages. Couldn't put it down!

Narration: Wen and Kai are fabulous as always~ The narration is amazing!

Wen has done a phenomenal job with distinguishing the voices for both Cole and Jameson. There was no doubt who was speaking each time. Kai’s voice just pulls me in every time and I feel each emotion she’s trying to express. Story wise, best friends for 20 years has Cole made the decision to show Jameson that his girl is not the right one for him, unfortunately his actions only fueled Jameson so give him a taste of his own medicine. Brooke is dating Cole and although she’s happy she starts to feel a pull towards Jameson and a deep desire burns in her to know what it feels like to have him. The storyline jumps a level hotter then before as an attraction is created and builds stronger each day. The sexiness is off the charts and Brooke is one damn lucky woman. As long as you have an open mind and are open to a little taboo you’ll love this story. This is a standalone but I hope we get to hear more about these characters on the future, I feel there’s more to be told with everyone. This is my unbiased and voluntary review.

This is the first I have read from this author. I was not disappointed, actually quite impressed. The flow of the story is smooth and has a good pace, no lagging. The characters are believable. The progress of the relationship is steady. The narration is killer. Just loved this one, super hot.

Such An Amazing Book

Jameson Daniels has been betrayed by his best friend of twenty years Cole King. A betrayal so deep that Jameson many never be able to forgive him. Cole had Jameson's girlfriend of four years so why can't Jameson pay him back by going after the girl he's interested in. Cole is going to know what it feels like to share Brooke Collins. Jameson just has to make sure she she falls for the right one of them in the end....Cole. But once Jameson gets a taste all bets are off.

The first thing I'm going to say is WOW!!!! Hard and Reckless is absolutely amazing. I love a good love triangle. Jameson, Cole and Brooke make one amazing triangle but there so much more than that. A betrayal leading to payback and lots of fun for Brooke with two hot alpha males takes on a whole different feel than the usual love triangles. She's not suppose to fall for Jameson, she's suppose to want Cole. He had her first. I swear these three characters all brought the heat. I could literally feel the emotions from them all pouring off the pages. This is what makes Victoria Ashley one of my favorite authors. The way her words flow with such depth and emotion that you can't help but be sucked up in the story and loving every moment of these she characters lives with them.

When Victoria Ashely announces she has written a new book I become a stalking fangirl until I know when it's coming out and when review sign ups are. I do not miss her books. She never disappoints and always always do I say this is my favorite book. I'd honesty hate to have to pick my favorite Victoria Ashley book. If you've read her books you know that Hemy is one of her best male characters of all time. I love him and he's always been at the top of my book boyfriend list. Sorry Hemy, but you've been knocked down a place on the list and Jameson Daniels now hold my heart. I didn't think it was possible but it happened. This is a definite must read. If you don't read but one book this year this should be the one. It's got everything you could ever want and so much more from a book.

Victoria Ashley is one of my favorite authors. This is the first time I’ve listened to an audiobook so I’m not sure how to review it.
For the book, I have already read it and it was amazing to hear it also. I loved that Jameson and Brooke had an instant connection even though they weren’t supposed to. I found that Cole was a huge jerk. Whatever his intentions were in the beginning he was still wrong for what he did and he was selfish to ask what he did of Jameson.
For the narration, I thought wen and kai did a great job. I felt like I was actually listening to the characters experience the story.
I may have to check out some more audiobooks in the future.

Victoria Ashley weaves a steamy tale of two friends turned rivals for the attention of a woman. Brooke is one lucky lady, to have two hunky guys and every girls fantasy come true. Things are never that simple though, when feelings are involved. The one she should be with isn’t the one she is thinking of and in the end someone will be hurt. Ross and Kennicott do an amazing job portraying emotions and compliment each other well. Definitely found a new series to follow!

OMG this book was so so hot! It was really great and I truly enjoy it.

Two bad boys that don't play by the rules, and a wonderful female that has them both after her, one act of betrayal, friendship, hot sex, but also sweetness and a good storyline was more than enough for me to finished this book in one sit.

The narration provided by Wen Ross and Kai Kennicott was truly great, as always their performance are gret and won't dissapont to whomever listen to this book.

this story is hot and sexy. The narrator's do am amazing job of bringing the characters to life. I can't wait for the next instalment.

Hard & Reckless byVictoria Ashley was a great read. This was the first book in the Club Reckless series. Jameson is angry at his best friend Cole of twenty years for sleeping with his girl. He wants his revenge but doesn’t know how to achieve it he meets Brooke and knows he has to have her even though she has been seeing Cole. I loved reading this story and can’t wait to read more by Victoria Ashley.