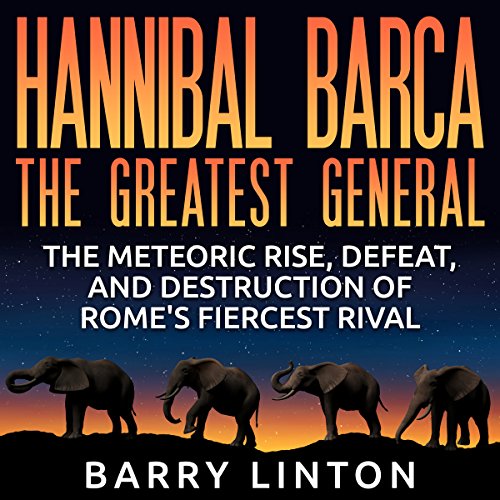 Author Barry Linton chronicles the adventures, myth, and legacy of Hannibal Barca. Hannibal accomplished many great successes, experienced personal tragedies, and yet persevered through it all. Nearly 2,200 years ago, he waged a 15-year-long campaign against the Romans called the Second Punic War. He's a polarizing character in history, and continues to be mysterious. Many documents of his exploits were most likely destroyed or altered by the conquering Romans, but what remains of his story has been studied by historians for over a thousand years. A military genius, he survived in enemy lands and defeated nearly every army that ever assembled against him. His great strategic victories and stunning crossing of the Alps have been esteemed by modern-day military leaders. Hannibal is considered to be one of the most brilliant generals in history, fathering many strategies that would later be applied by leaders such as Napoleon.

Distinguished generals, such as Napoleon and George Patton, have looked to his campaigns for guidance. He led from the front, never asking his men to do what he would not. This book examines his life and his accomplishments. Follow along as we learn about his origins, beginning with his rise to power and ending with his eventual suicide. His life and legacy remains the subject of art, literature, as well as other mediums. Hannibal often faced numerically superior enemy forces, but through ingenuity and the loyalty of his men, he would win battle after battle against the Romans.

The recording is ridiculous. The Sssss’s of the narrator are so obvious that I can’t listen anymore! FIX THIS!!!!

Honestly I can't tell you if it's a good book or not, I listened to maybe an hour and couldn't take it anymore. Every time the author says a word with the letter "s" it makes a whistle sound. I think it's a poor recording/audio editing. If someone could somehow edit out that it might be a descent story, I don't know. It literally hurt my ears every time a word with "s" was spoken.

Great read to learn about the politics behind the wars. A detailed lesson on the great general and one of the greatest enemies time had.