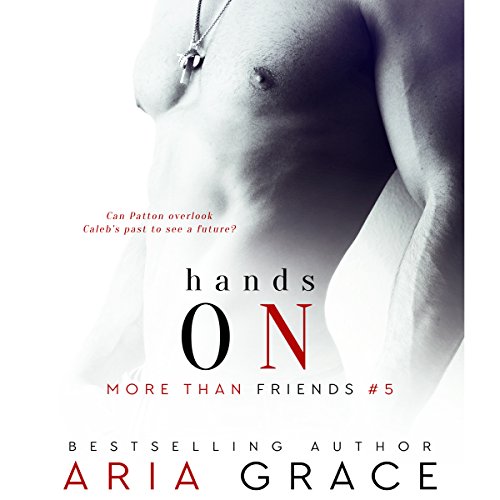 Patton is new to town and hasn't met a lot of people outside of the salon he works at as a massage therapist. He wants a relationship but he's quick to fall in love and even quicker to scare away most men he's interested in. When he meets an outgoing bartender named Caleb, he is immediately attracted but isn't sure he can date someone that has to flirt for tips all night long. Unfortunately, that's not the worst thing Caleb does to make a living.

What listeners say about Hands On: M/M Romance

Caleb is doing what he needs to survive and get through college. He meets Patton and whilst there is an interest on both parts the misunderstandings and assumptions get in the way. Both have their hang ups. Patton puts his foot in it every time with Caleb being too innocent of the tough world Caleb has to live in and spouts opinions that drive Caleb away.
Aria Grace writs the push and pull of a tentative romance really well.
I've not listened to Tim Todd before and he does an excellent job of portraying a bewildered Patton and a hesitant Caleb.
The audiobook really brings the story to life for me

Caleb & Patton are my fav

I've been waiting for Caleb's story. It kinda broke my heart that this kid working his way through college was the bar prostitute. I wanted to know more.

Patton is new to town and meets Caleb will he is tending bar. Patton is a massage therapist that offers a free massage to Caleb. Upon their initial first meet ups, it becomes clear to Patton that Caleb is a prostitute.

Now Patton has to decide where he lays with this and how him and Caleb can even have any kind of friendship when Patton has such a judgmental stance on caleb's profession. Meanwhile Caleb is battling his own demons with this choices and has to come to terms with the consequences.

I absolutely loved this one. My favorite so far. Aria is just amazing at these novellas and I eat them like candy. Can't get enough.

Tim Todd is a fantastic narrator. I wish that there was a little difference in Patton and Caleb's voices. It made it a little hard at times to keep up.

Emotional and engaging with a small dose of angst.

I would. It was a fast listen that was both well written and well narrated.

Have you listened to any of Tim Todd’s other performances before? How does this one compare?

I have not, but I will, I loved what he did with this book.

The bachelor party. I think the two characters started to see each other in a different light at that point, sort of a catalyst.

Caleb is working his way through college by any means necessary. He is a good guy, smart, with attainable goals. He never factored in considering someone else’s feelings on how he made his money. When he meets Patton at the bar where he is a part time bar tender, full time off the books rent boy, there is a definite mutual attraction. And when Caleb accepts an offer for a massage at the salon Patton works at, he starts to consider the possibility of something more for the first time in a long time. Then Patton makes an off the cuff remark and sinks the ship before it ever leaves the docks.

This has to be my favorite story and coupling in this series thus far. The story unfolds at the perfect pace, each piece of the puzzle being turned at the right time. The struggle Caleb faces was not only real, believable, it was painful. I loved the fact that he realized selling his body wasn’t the best line of work, but refused to be put down or looked down on because he pursued the only option he was given. Patton pissed me off early on, but then Grace did a fantastic job of humbling him and showing how he struggled with his attraction to Caleb, equal only to his disdain of Caleb’s choice of profession.

Narrated by Tim Todd, and though it was my first listen with this narrator, it won’t be my last. He really captured the true voice for the characters. I could feel Caleb’s frustration and Patton’s indecision throughout the story. I thought it was poetic justice that Patton’s lying, cheating ex was read as a sniveling jackass, much like his character!

Emotional and engaging with a small dose of angst. Definitely a must read if you are a fan of Aria Grace and/or this series. Perhaps it will become your favorite as well. I can’t wait to see what she brings to the table for the next couple in this series.

Woah. I wish I had skipped this book.

This story made me cry my eyes out at what was supposed to be the climax. I know you're supposed to be rooting for and understand Patton, but the way he treats Caleb... I'm sorry, but Caleb deserves better than a man who judges and belittles him and has to be begged to give this sweet, gorgeous and driven man a chance after asking him to give up his home, dreams and job for him. It felt like a tragedy when they got together in the end, because we started the book with a driven and caring Caleb who was delt a bad hand but is trucking through and handling his shit - to a Caleb that no longer thinks he deserves to feel special or be wanted...

I recommend skipping this book if you actually like either of these characters.

This is one of my more favorite books in the series. Patton the Massage Therapist and Caleb the Bartender / Male Escort. Poor Patton seems to love Caleb from the very first time they meet, but also seems to stick his foot in his mouth every time he opens it. LOL. And then Caleb doesn't seem to know how to handle Patton and what he says/does very well. This book has a little bit of Sweet, and Cute, and Heartbreak all in one.
Tim Todd is a new-to-me Narrator and he did a pretty great job with this one. Its just odd that almost every book in this series has a different narrator, but so far they have all been Good!!

A Story About Finding Love But Not Self-Worth

"Hands On" is an easy listen and I like how characters from the previous books are effortlessly incorporated into it, but I found this love story between bartender/rent boy Caleb and massage therapist Patton rather frustrating overall. I never warmed up to Patton given his repeated high horse judgement of Caleb, particularly since Caleb is already dealing with some inner turmoil about being a rent boy. Not that Patton is wholly undeserving of compassion and understanding as well for his many personal hangups, but his ongoing foot-in-mouth talent leaves Caleb feeling like garbage at every turn. Normally an HEA reconciliation would help smooth over some of that, but not with Caleb still basically feeling unworthy of being loved and Patton promising Caleb not to hold his rent boy past against him. Excuse you? Former rent boy or not, Caleb deserves unconditional love so yeah, frustrating right up to the end. I do like the More Than Friends series overall, this story (well, Patton really) just clearly rubbed me the wrong way. On a more contented note, narrator Tim Todd has a pleasant voice and I enjoyed his performance.

I hate how this book is belittling one of the main characters choices in what is actually a very safe and sane way. the whore with a heart of gold that needs a savior trope is so overdone, I was hoping for better

This book really highlights how we have to weigh the pros and cons of what we need to balance our lives. I adore the characters... particularly Georgie. I want to read about him and hope he has a book within the series. Great reads.

Another story ruined by a negative stigma...

Authors really need to educate themselves, and stop using "Clean" when referring to HIV status. The perpetuation of this horrible stigma implies that people living with HIV are "Dirty" or "Unclean".
It really is sad, because this is otherwise a fairly good series. Up to this point, the author has used the proper term of "Negative" and I'm not sure what prompted this horrendous change.

Cute, if a little simplified

This was an entertaining M/M romance. I liked the dual points of view and the story was pretty light with some good romance scenes. I understood where Patton was coming from, it would be hard to date a prostitute, knowing they're sleeping with other people, even if they don't actually like those people. I definitely didn't judge Caleb for what he did, gotta make money, but there are a lot of dangers in sex work. I'm glad he never got assaulted and had good security to take care of problem clients. Patton and Caleb's relationship was cute and I would love to see more of it!
The narrator did a good job, but was kind of soft spoken. I'm glad I listened to the audio because I got through this even faster!

This series is so addictive! I finish one audiobook and load up the next... honestly, I did the same thing with her Mile High Romance series. Aria Grace just builds such a great story and she's never afraid to put in something shocking or angst-y - and, of course, she writes such incredibly hot sex scenes she's a sure thing for a hot romance.

Tim Todd is the narrator for Hands On and as I've written before he's the perfect narrator for Aria Grace's stories. His voice is soothing and his enunciations are spot on, and I love his voices for the characters.

More Than Friends is a wonderful audiobook series and I definitely recommend it!