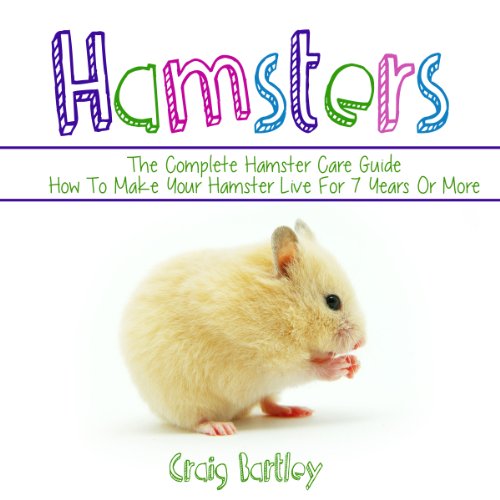 By: Craig Bartley
Narrated by: Matthew Finch
Try for £0.00

Hamsters are easy to care for and as such, they are ideal as beginner pets. More often than not, hamsters have fairly clean practices and are tame in disposition, in view of the fact that they have a friendly nature. However, it should be noted that if the hamster is not accustomed to being held, it will possibly hate being picked up and could bite the person who attempts to hold it.

Craig reveals what made his hamster enjoy a long and exciting life. This audiobook helps both adults and children and created to make the process of hamster pet care as seamless and as easy as possible. There are a number of different breeds of hamsters and becoming familiar with their characteristics and requirements will make it a great deal easier to choose the ones that are best suited for you.

Everything from "Which hamster is the best to get" to "How to care for your pregnant hamster" - this guide is essential for any hamster pet owner.

What listeners say about Hamsters: The Complete Hamster Care Guide

I was very happy to find a book on hamster care on here, as there is limited material for this in the world of books.

I am however sadly disappointed. It is very outdated, and some of these things I don't even think were outdated in 2013 when it was released, but as I don't know the years that the information was discovered, I will give it the benefit of the doubt, and call it outdated, and not simply innacurate.

The Hamster ball recommendations are good, limiting the use and being careful of overheating and stairs, and other hazards.

Chewing Toys:
Chewing toys are recommended, which is good. Wood chews are the primary focus, which is also great, and its even mentioned that some wood is dangerous and that branches from outside can be used, as long as its safe.

Burrowing:
The fact that they are natural burrowers is mentioned, and that is correct and accurate. While it is also said that they are natural climbers, this is not true, (aside from the Chinese) but climbing toys are still recommended as long as they are not too tall, some hamsters still find joy in them. A digging toy is also recommended, though only in one variation, a sand burrow, but this is perfectly acceptable.

Watch out for chewers:
It is mentioned that you should always be cautious with some substances (mainly plastic) if your hamsters personality makes it an avid chewer.

Washing down toys:
It's mentioned that you should wash down toys before use. That's good.

Enrichment:
Enrichment in general is recommended which is very good and important when taking care of a hamster.

Generally it is mentioned that its important to take good care of the pet, to do research, and to take the animal to the vet by the slightest sickness sign, which is very important when it comes to rodents. There are good recommendations for traveling, and escaped hamsters, and even the breeding part is fairly good. The food is also a fairly good portion of the book.

I'm sad to say that the bad outweighs the good, especially since a lot of these mistakes can cause great suffering for your pet.

Mineral stones are recommended, but these are actually not really good for a hamster. Some contain a lot of salt, and too much minerals that can cause kidney problems, and should not be used.

It is a myth that you can transfer your cold to your hamster, if your hamster behaves like it has a cold, it is probably experiencing some kind of respiratory problem.

Hamster kinds are actually different species, and using the word breed here is inaccurate, it suggests that they can interbreed, which they cannot, except for the Winter White and Cambells, who produce a hybrid that has known health issues, and is frowned upon by ethical breeders.

The cage size is probably the saddest part of this whole thing. While cage size recommendation differs from country to country, 25x40x40 for a Syrian hamster is way too small. It's not even big enough for a dwarf hamster, and there is no mention of "the bigger the better" which would perhaps redeem this part a little more. The stress that a hamster without any space can experience is a huge amount, and it would be a very important to but emphasis on this.

The book claims there is no recommended wheel size, but this isn't true. It's generally recommended to have a wheel that's so big that it doesn't bend the hamsters back, 28cm for a syrian wheel and 18-20cm for the smaller species. Bizarrely, this back bending problem is only mentioned in relation to the hamster ball, which is really strange. Critter trail wheel is being recommended, and that is not big enough even for a Roborovski, and should be avoided at all costs.

The book puts a weird emphasis on the hamster ball, as if it is mandatory. It is not, and should only be used on hamsters who are comfortable in the ball, and at the slightest sign of stress, you should abandon the attempt to use the hamster ball. It is however mentioned that you shouldn't keep it there for a long time, which is good.

When it comes to bedding, Cedar is not recommended which is very good, because Cedar is dangerous. Pine is however recommended, even though that is just as dangerous as Cedar and should not be used with any rodent.

While I know by experience that some pet shop employees know a lot about the animals, because I used to be one of them, I am a little iffy on recommending you go to them for advice. There is no requirement that you know anything about the animals in most pet stores, and there is a lot of inaccurate information coming from there. My own coworkers told me I could happily keep my Chinese and Syrian hamster together which is blatantly the stupidest thing you could do.

DO NOT USE ANY COTTON WITH YOUR HAMSTER. THEY CAN SUFFOCATE, LOSE LIMBS, GET CONSTIPATED AND DIE

this is a very important point that the book should have touched on, as it is not widely known and its kind of scary how few people know about this.

Though its mentioned about diet differences in Syrians and dwarf hamsters, it is not explained really why or what you should be avoiding.

Though the breeding is well explained, there is nothing said about reckless breeding, or unnecessary breeding, or ethical breeding. This is an oversight in my opinion.


Overall, this book is a mess. There is some good information, but there is a lot of dangerous and downright silly suggestions that I really don't understand. The book seems badly researched and a lot of it seems to be based on the assumption of someone who owned hamsters before but never really went out to learn more about them elsewhere.

When it comes to the performance, its kind of janky and weird, and some words seems jumbled, especially when the narrator is talking about the dwarf hamster names. I also didn't like the usage of "teddy bear" and "black bear" hamsters and the like, as these are names of Syrian hamsters used to make them seem more exclusive by pet stores so they can charge more, when they really are just variations of Syrians, and not a different kind at all.

I don't recommend this book as a source of information, because it contains far too many inaccuracies, some of which can be actually dangerous. I'm disappointed that there seems to be few other books on the subject, and I hope nobody uses this book as gospel when they get a pet hamster.

Quite a bit of inaccurate info. Very disappointed. This is coming from a 10 year breeder.

Sub par audio quality, mispronunciation, and odd pauses. It's a nice book though; short and informative.

I diddnt like the reading but the story was great