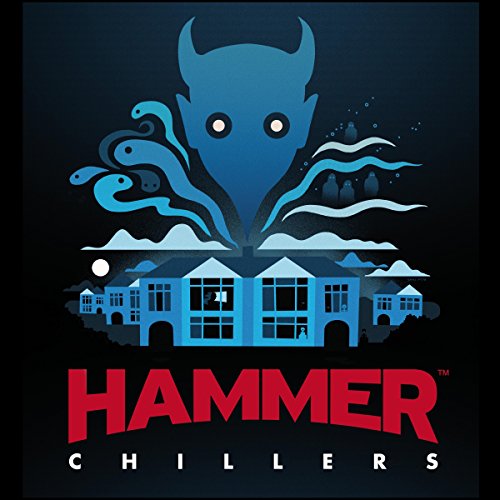 "As an audio production this is first rate... a high quality production in the Hammer style." ( STARBURST MAGAZINE)
"A worthy successor to Hammer House of Horror." ( SFX MAGAZINE)
"Hammer Chillers certainly hit the mark... a modern classic of audio horror." (SFF AUDIO)
"Best listened to during daylight." (BRITISH FANTASY SOCIETY)

What listeners say about Hammer Chillers

I say "surprisingly good" in my headline because some of the titles and overviews of the six stories didn't sound that appealing, but the audiobook was a recommendation by a friend ... so I needed to get this book in order to feed back my views.

I was mostly pleasantly surprised by each story. I think "chillers" accurately describes what they are, they aren't pure horror in the jump-scare sense, just creepy tales that may well stick with you. A couple give off a Reece Shearsmith and Steve Pemberton "Inside No. 9" vibe in my opinion. One of the stories in fact, I won't say which, remains with me a couple of days later, which is a sign of a good story. I am one of those people who mentally projects visual imagery onto the forefront of my mind when reading and listening to books and I got this one in particular in full technicolour. I can still see its climax. Chilling.

That's not to say that this is perfection. 'The Fixation' was perhaps a little silly for my taste; 'Spanish Ladies' was perhaps the weakest story for me, but overall the performances as well as writing are top notch.

If there were more of these in a series, I'd get them.

The six audio dramas contained in this audiobook are of the highest quality. The stories are ingenious and,of course, disturbing . The dialogue is believable and the acting is superb. It would be great if Hammer could make more audiobooks like this. Great sound effects too.

As a long time fan of horror, I’ve listened to a number of audio plays over the years and every single one of these Hammer Chillers are imaginative, surprising and superbly written and performed.

I really enjoyed Hammer Chillers, excellent stories that have scary parts that made me jump!
The stories stayed with me for a long while afterwards, fantastic acting. Definitely would recommend

Enjoyable definitely worth the credit.
Convincing and very well performed
I'd definitely purchase any sequel

An extremely enjoyable collection of horror plays that will make you feel quite uncomfortable and genuinely scared.
I listened whilst out walking my dog in the half-light mist and the sound effects and narrative made me feel quite fearful.
It was brilliant and well worth a listen and re-listen.

Return to the original House of Horror

Excellent takes on classic themes. Really great acting by the performers would love a second volume👍

Entertaining, original stories, fab performances and some very effective, creepy music make this a hugely entertaining listen. It's hard to pick a favourite, but it might be The Devil In The Dark. Love this audio book and will look out for any future anthologies from Hammer and Bafflegab.

Loved everything about this book I listen to it again and again. I highly recommend it

Hammer at its best

the performance was fine. no problem. the stories weren't scary. not even creepy. no real suspense. apologies, maybe it's just me, but I did not enjoy it.

I saw someone gave these only one star, I don't know why because if you love British horror you should love this. These are not for kids!! But are several stories from the supernatural to 70's slasher. I hope they put out another collection.

I am new to audio dramas. this one was great. stories were good, but left the endings open. enough to use your imagination for what you just heard or read.

horrible collection! Hammer should be ashamed!

no. the stories were terrible and the narrators were unprofessional

screaming one minute, whispering the next

What character would you cut from Hammer Chillers?