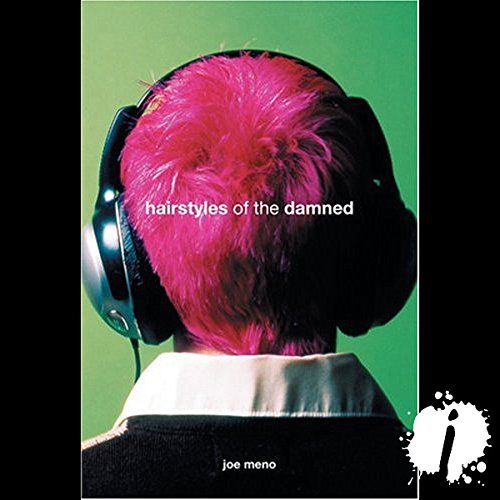 Hairstyles of the Damned

Hairstyles of the Damned

Hairstyles of the Damned is an honest and affectionate depiction of wanting to belong, but never quite belonging. Joe Menos pitch-perfect prose illuminates the tumultuous realities of American adolescence, the disintegration of the modern family, and the way a mix-tape can change a persons life. Following the riotous exploits of Brian, a Catholic school malcontent, and his best friend Gretchen, a punk rock girl fond of brawling, this work of fiction unflinchingly pursues the truth in discovering what it means to develop your own identity.
©2004 Joe Meno (P)2009 Audible, Inc.

Having read the book a few years ago, I was curious to hear the audio book version. I've been a fan of Meno's writing since his Punk Planet days (RIP) and really enjoy all of his books. This one is a particularly heartfelt tale of a kid who goes from being a nerdy metal head to being punk (which is probably not what you imagine) in the true sense of the word (i.e. Mission of Burma and Fugazi versus whatever dreck you might be imagining). It doesn't do it cheaply, though. The character of Brian Oswald deals with crushes, coming of age, sex, and drugs in very realistic ways. So much so that at the end when he half denounces all the kids with mohawks and bondage pants as not even punk, it's not cheap or trivial: he's come out of something and didn't just affect a shocking style to piss off his parents. The audio book has a few mistakes, however. The most annoying of which is the narrator's "singing" of the Misfits songs "We Are 138" in which he sings "we are one hundred and thirty eight" versus "we are one thirty eight" which is a pretty big mistake considering the context. That and the bizarre intro/outro music (which is truly abhorrent and about the least punk, silk shirt with a pony tail, mid 90s jazz something) sort of hurt the strength and authenticity of the book. All that aside, in book or audio book form it is an excellent story.

Captures highschool without being painful

I really enjoyed this, despite it really capturing the difficulties of being a teenager. The author crams a lot into the story - broken families, drugs, sex, that special attachment to music that teenagers have - without the story getting jumbled. The author also manages to keep the story from being cliche, although, to be sure, coming of age tales are nothing new. The characters are so well developed that as they move through the well-worn path of trying to fit in, while being yourself, while figuring out who you are, I never once got bored.

Story was good, performance did not fit

I enjoyed the story though it did feel like more of a parody of punk than a tribute at times. My main issue comes with the "voice actor" his voices for females were all vally girls when they should be punks. Another "problem" was that ot took me a while to get through because every time a good song was mentioned, i had to go listen to them again. I'm still listening to Misfits on repeat after listening ro this book.

this is the first book I ever got hooked into in highschool. I related to Brian in so many ways. this audiobook was a nice trip down memory lane. narration was ok, not amazing but not experience breaking. girl impressions all the same very ditzy sounding, and every smoker and skater sounded like burnouts who could barely function. aside from that it was decent. also a complaint on editing, the music at the end starts too soon and kinda kills the vibe that was intended.

We are one hundred thirty eight...

Where does Hairstyles of the Damned rank among all the audiobooks you’ve listened to so far?

This has been one of the better audiobooks I've listened to thus far. The sound quality was pretty good and the narrator wasn't particularly annoying (like many are). I've been fond of Joe Meno for a while and have read this book more times than I can count. The recording was average, but the book is excellent and I'll probably listen to it again eventually.

The narrator butchers a few song titles and lyrics. His cadence, when reading Misfits lyrics, is a ridiculous.