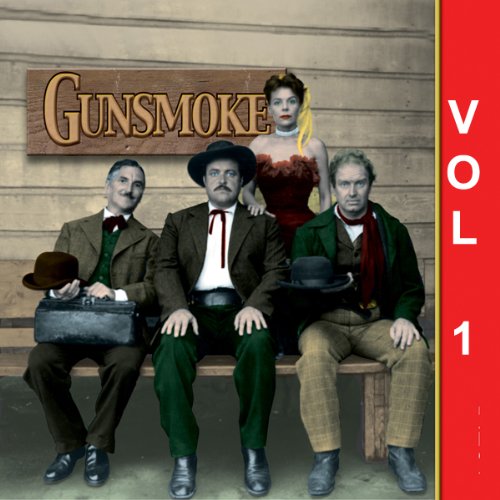 Set in Dodge City, Kansas, in the 1870s, Gunsmoke aired on CBS Radio until June 1961. William Conrad starred as U.S. Marshal Matt Dillon, and he was joined by three other regulars: Howard McNear as "Doc" Charles Adams; Georgia Ellis as Kitty Russell; and Parley Baer as Chester Proudfoot. This collection features five episodes of the classic series:

Please note: Each episode of this collection will appear separately in My Library.

Please note: Each episode of this collection will show up separately in My Library.

You can track down more collected volumes of Gunsmoke, or pick up the individual episodes.

"Among fans of radio drama, [Gunsmoke] is considered the best western ever. The series was marked by high-caliber writing....Veteran radio actors appeared in episode after episode, and innovative sound patterns and evocative music made the program a favorite of radio devotees." (Lawrence W. Lichty, Historical Dictionary of American Radio)

What listeners say about Gunsmoke, Vol. 1