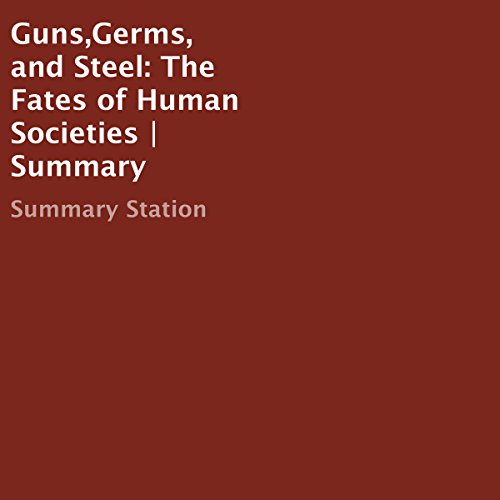 Guns,Germs, and Steel: The Fates of Human Societies | Summary

By: Summary Station
Narrated by: Mutt Rogers
Try for £0.00

Jared Diamond says that 25 years ago he met a politician in what is now Papua New Guinea, Yali, who asked why white people had so many things, but black people did not.

The book attempts to provide answers to the question: Why have Eurasian people been the dominant wealth and power in the world? That is, why didn't other cultures gain dominance before 1,500 CE? After all, until the end of the most recent Ice Age, circa 11,000 BCE, all humans were hunter-gatherers. So, what accounts for the different rates of development of societies between 11,000 BCE and 1500 CE?

Those questions are the subject of the book. The author says that finding reasons or causes for the unequal distribution of wealth and goods does not justify it. Diamond says we do not justify disease just because we understand its causes. He says that the foundations of European societies were developed in other part of the world, so the focus is not on aggrandizing Europe.

How Geography Determines the Structure of Societies

What listeners say about Guns,Germs, and Steel: The Fates of Human Societies | Summary

Editing error about 45 min into the book

I suggest the narration gets revised because there is a big error in the narration about 45 min into the book. The narrator stops coughs practices his line and continues reading.