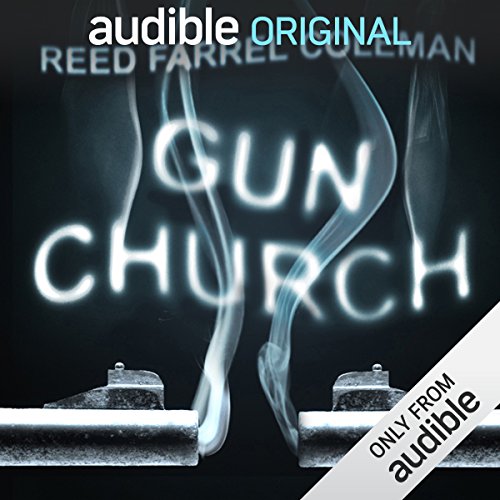 Kip Weiler is a self-destructive, washed-up, middle-aged professor. Once a superstar of the literary set, he has bottomed out after years of drinking and not writing anything worth a damn. As the novel begins, he’s teaching classes at a small, rural community college. Kip's talent, money, and chances have just about run out, when he rescues a classroom full of his students from a deranged student gunman who opens fire and takes the class hostage.

As a result of the subsequent media attention, Kip gets an invitation to join a bizarre club-cult with members who have a near-religious fascination with handguns. His involvement with this group - and a simultaneous fling with a "spectacular" and sexually adventurous student of his named Renee - rekindles his passion and his creative-writing energy.

But just when his muse returns, Kip Weiler’s life takes an even more insane and deadly turn. Kip begins to write a new novel called Gun Church, and things begin to happen in the real world that parallel his novel in progress. By mid-book it’s impossible to know where the art stops and the life or, in some cases, death begins. Can the very thing that gave Kip back his life take it so quickly away?

“Reed Farrel Coleman is again operating at a very high level in Gun Church. Narrated by a failed writer who has notions of literary redemption suddenly sparked awake again, it is an audaciously plotted adventure in the unglamorous America. Coleman has a lot to say about the psychology of a writer's life, ethics or their absence, and a great eye for the world around us. It is a confessional but propulsive novel, bizarre at times, touching, expertly paced and fresh.” (Daniel Woodrell, author of Winter’s Bone and Tomato Red)
“If this is church, I might start going. Sign me up as a parishioner.” (Don Winslow, New York Times best-selling author of Savages)
“Coleman’s Gun Church is wonderful. His protagonist, Kip Weiler, is one of the most fascinating characters in years.” (David Morrell, New York Times best-selling author of The Brotherhood of the Rose)

What listeners say about Gun Church

Glad I took the chance

I did hesitate about buying a book that hadn't been reviewed by users or print readers yet. I am very glad I took the chance though. The publishers blurb led me to expect something a bit mystical but instead it was more a well paced psychological thriller than anything else. One of the main characters (Jim) was a bit of a caricature but the rest were developed enough to make up for it. The ending was very satisfying and very fitting. I was always sorry when my journey ended and I had to stop listening for the day. Well worth the credit.

I enjoy reading very much but time is pressing, so I started listening to Audio books. My husband bought a cable that can be hooked up from my Kindle to my car stereo, so I don't have to use an earphone. When I started listening to Gun Church, I didn't really think much of it. But, as the story progressed, I started driving to school slower and slower--I'm a teacher--just to get the most chapters out of my ride. Even though the character isn't a young man growing into adulthood, I would consider the growth of the main character to be like a "bildungsroman". As the plot progresses, the main character, Professor Willer, changes and realizes the mistakes he has made in life. The inner life of the Professor, and failed writer, comes to life during the story.

If you could sum up Gun Church in three words, what would they be?

Kip. It was like watching a series character's arc all in one book.

What does Joe Barrett and John Keating bring to the story that you wouldn’t experience if you just read the book?

Joe has that voice that makes you think very little about who is narrating. That is a huge compliment for me. John Keating was a good addition for the Irish piece because faking it would be worse if Joe did it. Audio books are like movies in my head. It's great when I am engrossed in the performance and don't notice the director being "artsy". This was that.

If I made the film...maybe..."If you liked Gone Girl you'll like Gun Church" And you'll wonder why the book wasn't bigger.

I'd love to see a film made of this book. My title was to thank Robert B. Parker's estate for hiring Reed Farrel Coleman and giving me a list of books to buy. This book should have been huge. It was for me.

By far one of my favorite listens ever. Entertaining all the way through, but the last couple of hours was even better awesome ending.

Took me a long time to hate it.

A snarky aside to "Fight Club" which surfaces early in this novel tries to separate the story from Chuck Palahniuk's superior one. But the parallel remain, and friends, this is NO Fight Club. There is nothing surreal in this straightforward tale of a has-been hipster writer who is introduced to a ridiculous rural secret society that hosts kevlared gun duels on an old army base. The first person character has a dry tone that paints the scene well, and the narrator of the audiobook has a solid, likable voice, so the whole thing rolls along quite easily before you realize you still have 5 hours to go and NOTHING is happening.

The complaints and self-revelations of Kip, the middle-aged screw-up, are booooring, and his haughty view of his countrified neighbors (and their cartoonish portrayal) is irksome. There is virtually no intrigue in the story, almost everything that happens will make you nod and say, "Now it's time for THAT part".

There is no "there" there. The writing is competent but certainly not rich, evocative or provocative. The characters give you no one to root for. The "book within a book" concept (hence the second narrator, who portrays the Irish-voiced first-person of Kip's new novel) is almost as bad, although the interior novel takes more chances and might have been a better book.

This book COULD have been an insightful analysis of the confusion of love and power, of our nation's bizarre relationship to firearms, of one man's serial obsessions and his inability to conquer them. But - nope.

I'm writing this review with just over 2 hours left in the book. I'm determined to hang in there, but so desperate to listen to something else that I will not be able to write the review when I'm finished. IF I finish...

JUST LIKE THAT BUT DIFFERENT
This has been compared to Fight Club and Fight Club is even mentioned in the book. This is not Fight Club, it is better. I read Fight Club, liked it, but liked this just a little better. It is a strange concept, people shooting at each other for fun, but so is fist fighting.

DID YOU PLANT THAT IN MY HEAD OR DID I PLANT IT IN YOURS?
This book will play with your head. Just when you think you know what is going on, you don't. There are lots of twists and turns, which keeps the story from getting stale. This is a book within a book. The author mentions dream sequences and how they are a crutch for some writers. I have always hated dream sequences, so was glad to hear why they are used so often.

BAD NEWS IS BETTER THEN NO NEWS
There are some weakness to the story which kept it from getting the fifth star. I like sex, I like it a lot, but I really found the amount of sex this guy is getting with the ST. PAULY Girl to be a bit unbelievable. Where was this chick when I went to school? It also has an element that I really hate, that in which something happens and all the readers go, what was that, but the main character makes up some poor excuse for ignoring the obvious, happens more then once. The back pocket one saves the day. I also thought the saving day part was a pretty cheap way out and as believable that this guy is getting laid several times a day and for hours at a time.

A SPORT IS ONLY SPORT WHEN BOTH SIDES KNOW THEY ARE PLAYING.
I am a fan of Joe Barrett, not a fan of John Keating, but thought this turned out great.

DID THEY HAVE FACE MASKS WHEN YOU PLAYED OR WERE YOU BORN WITH THAT FACE?

What did you love best about Gun Church?

The story was excellent and very believable

Each character was very well developed.

What about Joe Barrett and John Keating ’s performance did you like?

Both have emotive and pleasant voices and are skilled at projection

Worthwhile because of the performance!

Would you try another book from Reed Farrel Coleman and/or Joe Barrett and John Keating ?

What was most disappointing about Reed Farrel Coleman’s story?

First visit to the gun church.

The performance is excellent. If I had been reading this book instead of listening to it, I probably would have flipped to the ending midway through and given up on it.

How on earth is this on any best seller list? Neat premise, but the story never seems to build to anything....

I listen to a lot of audiobooks and this was head-and-shoulders above the pack. The story itself was suspenseful but that’s true of many lesser books as well. What sets this book apart is the careful development of the main characters. The narration was also expertly performed.