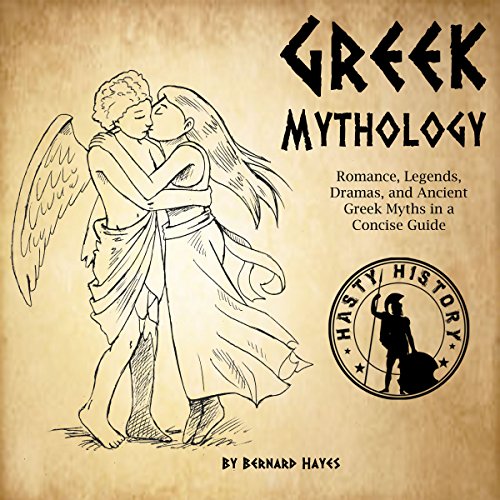 By: Bernard Hayes
Narrated by: Kyle Walton
Try for £0.00

Hear about some of the most interesting, best-known myths from ancient Greece. In this elaborate guide, you’ll learn all about the dilemmas, relationships, and trials the Greek gods, goddesses, and other mythical creatures went through. Examples are:

Greek mythology is intricate and complex, and the ideals behind their mythological beliefs were often intertwined with real life events. This audiobook will examine how both myth and fact contributed to the culture and traditions of the Greek, and how these influences and stories continue to live on throughout the centuries!

Very interesting to learn more about the Greek myths and gods. It is a cultural must.

Don't skip this book! IT's all about the Greek myths and the romantic, dramatic stories in there.

I loved the content. What did I like about it most? The stories of the dramas between the greek gods and goddesses.

You can learn a lot from the Greek mythology and the cultural heritage we got from that. This is an excellent, professional guide to that.

This is such a marvelous book about the Greek myths that people used to believe in. I was amazed.

Good audiobook, and I had no complaints whatsoever. The other books by this author are good too, just saying.

Yeah, but there is a lot of fighting and blackmailing involved too in these Greek myths. Nice book, though.

Romance and legends is right

What were those Greek gods and goddesses up to, man? They were weird. Fun to listen to their stupidities.

Greeks had some crazy stuff

The romance, the sagas, the gods, the power, and the drama cannot be summarized in one sentence. Better just get the book.

You wanna learn more about Greek mythology? Then this is the best one out there.

Nothing else to say really, I just wanted to say I like them. Nothing more. Oh, so this review needs to be 40 characters or something. I reached it now.

You can't beat the Greek when it comes to mythology. They were some of the first ones. Weird stories, man.

The Greeks had some weird myths, man. They were crazy, but hey, it's fun to listen to them.