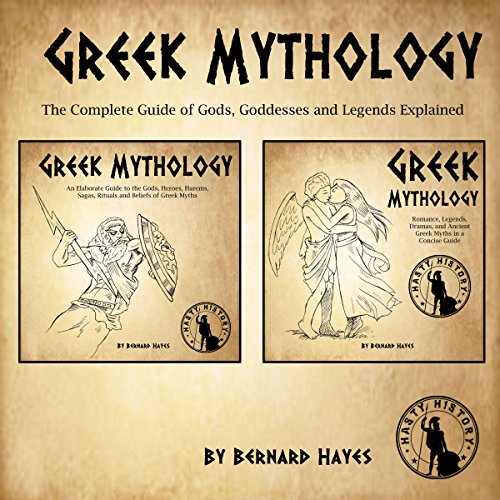 By: Bernard Hayes
Narrated by: Kyle Walton
Try for £0.00

Two audiobooks in one volume!

Book 1: In this book, Greek Mythology: An Elaborate Guide to the Gods, Heroes, Harems, Sagas, Rituals and Beliefs of Greek Myths, the listener will be taken through the ancient customs and beliefs of the ancient Greeks. The report is dedicated to the gods the Greeks worshipped. You will find, among others:

The Greek had many heroes in their myths and legends, and you will be introduced to both them in this guide.

Greek mythology is intricate, complex, and the ideals behind their mythological beliefs were often intertwined with real life events. This book will examine how both myth and fact contributed to the culture and traditions of the Greeks, and how these influences and stories continue to live on throughout the centuries!

Book 2: Hear about some of the most interesting, best-known myths from ancient Greece. In this elaborate guide, you’ll learn all about the dilemmas, relationships, and trials the Greek gods, goddesses, and other mythical creatures went through. Examples are:

What listeners say about Greek Mythology

There are so many myths out there that are worth studying, and Greeks are one of the biggest ones in this realm.

What is there to say? I mean, all the information about the Greek myths is right here. You don't need anything else.

I thought this was an extensive bundle of good stories and heroes that they try to describe, even though they are all fictional.

Troy, Hades, Ikaros, and others are described in this double book or bundle. Very enjoyable to listen to all the stories.

The mythological creatures and the epic characters in these books make sense. I had this stuff in high school, but audiobooks are the way to go.

I liked hearing a true British accent, as opposed to all the American narrators on Audible. This one stood out.

The Greeks were great

I thought this was going to be a dud, but I got pleasantly surprised by how good it actually is. Nice audiobook.

I thought the drama in the Greek mythology is one of the greatest ones in history, that's why I listened to this book. Nice execution. Well done.

The Greek myths apply to many words today and many habits and sciences that have been left over by it. Interesting read, I mean... listen.

Know what you get

If you like mythology, this is it. If you don't like a British accent, don't get it. But inn my eyes, the narrator was really good.

The myths from the ancient world always fascinated me. Great day and age that we can just sit back and listen to those stories. Funny they believed these things back then.

Hey, all the language and all the terms in our science we derived from Greek.... some of those stem from the myths. Like narcissists being from the Narcissus myth, etc.

I can't believe this is out there! So cool! Skip all those hours in high school listening to lectures and get this one to find about Greek myths at your own time.

There is so much in this nine hour book that I don't even know where to begin. Oh well, I liked it. Let's just keep it at that.

I liked this book. I liked listenening to the narrator, and I think Bernard Hayes did a great job outlining the Greek myths.

I enjoyed it. No complaints. I thought it was a good way to narrate Greek mythology books.

A grand, serious narration shouldn't contain terms like "kicked the bucket". Uranus and Gaia's children shouldn't be called "kids", and Cronus should overthrow his father, not his "dad". A small criticism, but it really distracted from the story at times.

while I'm no expert at speaking the written word, and I understand that the book is written in a complicated style, i must have counted no less than 30 orator corrections, which threw off the flow of the book significantly, some of which were back to back.

Thumbs up for this book. Nothing wrong with it. No complaints. Good Greek mythology compilations.

Zeus and Herakles and Odysseus and others are in this book. Even the smaller myths get touched on.