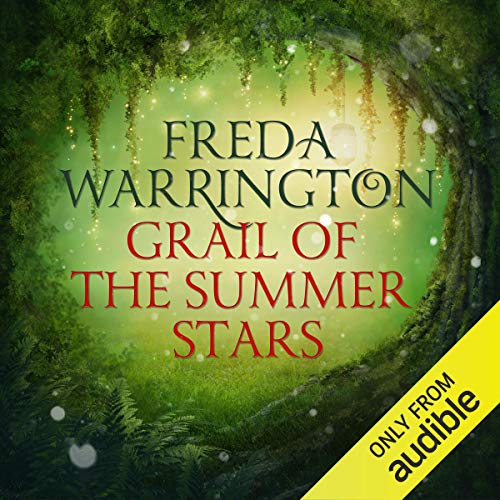 Grail of the Summer Stars

By: Freda Warrington
Narrated by: Matthew Lloyd Davies
Try for £0.00

A painting, depicting haunting scenes of a ruined palace and a scarlet-haired goddess in front of a fiery city, arrives unheralded in an art gallery with a cryptic note saying, “The world needs to see this.”

The painting begins to change the lives of the woman who is the gallery's curator and that of an ancient man of the fey Aetherial folk who has mysteriously risen from the depths of the ocean. Neither human nor fairy knows how they are connected, but when the painting is stolen, both are compelled to discover the meaning behind the painting and the key it holds to their future.

In Grail of the Summer Stars, a haunting, powerful tale of two worlds and those caught between, Freda Warrington weaves an exciting story of suspense, adventure and danger that fulfils the promise of the Aetherial Tales as only she can.

"Freda Warrington deftly weaves together contemporary art and ageless magic in this vivid, atmospheric fantasy.” (Tricia Sullivan)
“... A classy, beautifully rendered tale that persuasively builds from low-key beginnings into a complex enterprise with real heft, a rich back story and characters that grow with the narrative. A must for existing fans, while being easily accessible to newcomers.” (Kirkus)
“I really loved it: great characters, terrific story, very moving and involving.” (Kari Sperring)
“If Freda Warrington didn’t write, it would be a crime against humanity. This woman was born to write and tell stories and she does it incredibly well... Warrington has perfected atmosphere and her characters fairly jump off the pages... There's romance, friendship, betrayal, growth, revelations and much more. Basically, it's anything anyone could possibly want in a book... [Warrington] know[s] how to write an incredible story full of emotional drama, depth and amazing world building. Freda Warrington doesn't just write urban fantasy. She's mastered it.” (Bookworm Blues)

What listeners say about Grail of the Summer Stars

Loved this so much!!!

So sad that this saga is over. I fell in love with the characters (and hate for some of them) but loved this series so much!

I liked the series. interesting characters with different backgrounds. Well read and easy to listen to.