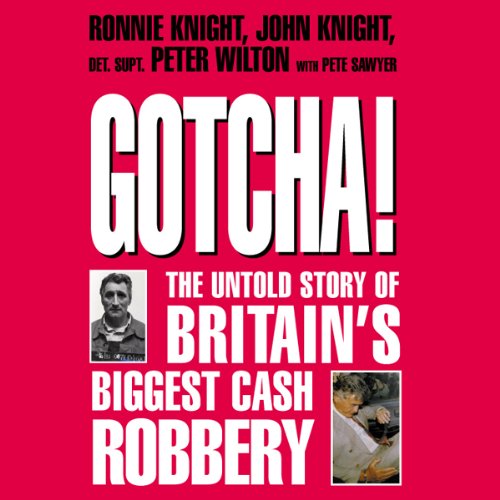 By: Ronnie Knight
Narrated by: Christopher Ellison
Try for £0.00

On Easter Monday 1983 armed robbers got into the supposedly impregnable Security Express depot in Shoreditch, neatly capturing the guards and holding them hostage. They hauled away five tons of cash, then worth £6 million. The gang made no mistakes and left behind not a single clue.

Detective Superintendent Peter Wilton was the man in charge of the investigation. He spent years tracking the culprits, playing a ruthless cat and mouse game that led him to some of London's most notorious villains. John Knight and his brother Ronnie were well-known faces, hard men who kept to the East End code. They were riding high when John Knight and his team executed the perfect robbery, and Ronnie helped launder the cash. They almost got away with it.

As gripping as any thriller, Gotcha combines the Knights' and Wilton's stories to graphically recreate the robbery, from the adrenaline-fuelled raid to the long police search, from the high life on the Costa del Sol to interrogation, betrayal, and arrest.

What listeners say about Gotcha

Christopher Ellison makes a fantastic job of pulling all the facts together with his unique talent to make your listening experience want more.The content is very interesting, factual some times entertaining but on the whole gives you a insight of being there as a villan without being one!!! a must