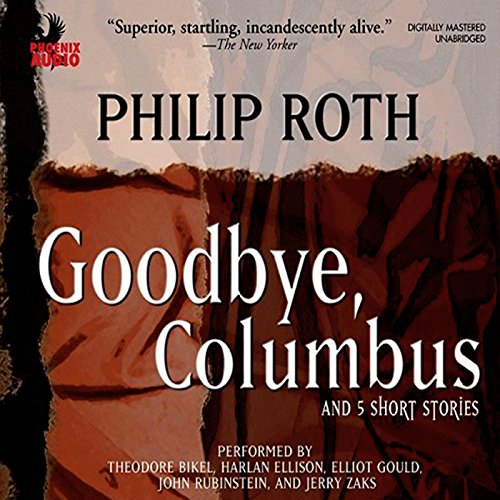 By: Philip Roth
Narrated by: John Rubinstein
Try for £0.00

Neil Klugman and pretty, spirited Brenda Patimkin - he of poor Newark, she of suburban Short Hills - meet one summer and dive into an affair that is as much about social class and suspicion as it is about love. The novella, the first book published by Philip Roth, explores issues of both class and Jewish assimilation into American culture. It won the National Book Award in 1960.
©1993 Phillip Roth (P)2009 Phoenix

"A masterpiece." ( Newsweek)
"Unlike those of us who come howling into the world, blind and bare, Mr. Roth appears with nails, hair, teeth, speaking coherently. He is skilled, witty, energetic and performs like a virtuoso." (Saul Bellow)
"Superior, startling, incandescently alive." ( The New Yorker)

What listeners say about Goodbye, Columbus

In this collection of short stories, Philip Roth confronts the question of American Jewish existence in the years following World War II. How to make the move from city to suburbs? To what degree can, or should, one shed those distinctive trappings of Europe that clung to prior generations? In the title story, this is all encased with in a superb summer love story, one that could have been about any young man and woman, but benefits from being about its particular subjects. The remaining stories are good, but read more like short thought pieces, or, at times, diatribes, rather then as coherent tales.

For the performances -- there are several different readers -- they are generally very good, but two stand out. Theodore Bikel's Israeli-accented take on "Eli," the final story in the collection, initially seemed inapt; the character is, after all, a New Jersey suburbanite. However, as the story developed, the performance seemed more and more appropriate, and by the end I believed it to be spot on. Finally, the enactment by John Rubinstein of the title story is funny, insightful, and brings you within the narrator's life as though you had temporarily moved into his home...

The winner of the 1960 National Book Award, the title story GOODBYE, COLUMBUS is of the end of love, discovered. It's actually a novella accompanied by 5 nice short stories. The novella is well worth the admission price, a tale of young love between two 20-somethings blending issues of the heart, class and the sexual mores at mid-20th century. It also explores differences among Jews as well as Jewish *assimilation* in the 50's.

A very wonderful book. A classic. I have always loved Philip Roth's work.

I loved this book. Roth is such a good writer! The stories are funny, sad, poignant and thought provoking. I cared about the characters quickly and loved the moral value of their experiences. This is my first time reading anything by Roth but it won’t be the last.

Each story had its own narrator, and all were splendid!

Wasn't what I remember

I had fond memories reading this book in high school. For a while now I've wanted to go back and re-read it (err listen) partly to relive some of those feelings but also to remember why it had an impact on me in the first place. I really don't recall many books l from high school impact me, but this one did... I think.

But I just didn't like it the second time around. There were moments I had some emotion: I suspect my good memories were mostly around the passion that Neil and Brenda have as I recall being in a difficult relationship then.

But otherwise it just didn't hit me like it did. Or maybe I just don't remember right. I'm old now.

I can't even believe how bad this is

I have read most of Philip Roth's books (my favorites are the Zuckerman books) and I had this one sitting around in my library for a long time. I listened to it yesterday up to the point where the stories started. Then I threw the book in my garbage can.

Goodbye Columbus is just an insipid little story about a loser who can't get with the girls.

And I need to mention how horribly it is read.... This John Rubinstein guy does a Jewish voice serviceably, but that's it. The protagonist isn't well done nor are the many female voices. This guy must be friends with Philip Roth or something because I seriously do not know how else he got the job.

Maybe the director was deaf? That is the only reasonable explanation I can come up with.

Read this to fill a hole in my education. Can’t believe I never read Roth before. Will read more soon.

Great listen, except for the final story

The last story in this collection is the comically bad. Extremely overwritten. He describes every single detail of a scene before anything actually happens. Worst of all is the narrator. He actually slows down and faintly whispers when the characters get excited and talk loudly. And the story is from the perspective of an American, juxtaposed with a German Jew, but the whole thing is narrated with a thick accent. Clearly no thought was put into it. Also, it's very long. Even longer than this rant about how awful it is.