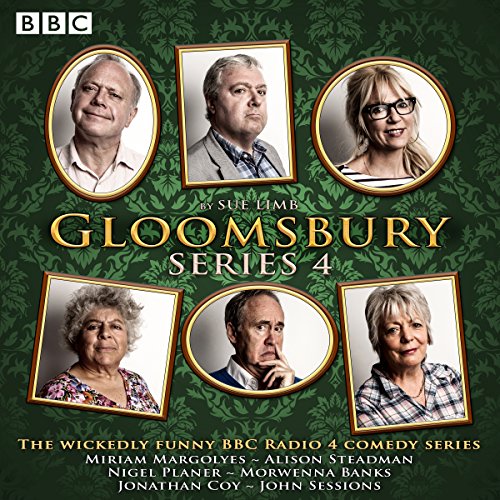 "...one of the funniest, slyest, most naughtily inventive and brilliantly performed shows on the air." (Gillian Reynolds, The Daily Telegraph)

This fourth series sees our arty, adulterous Bohemians struggling with the issues of class, money and how to become truly modern.

Henry is concerned about Vera's dangerous susceptibility to romance, and her tendency to fascinate several women at once. In addition, he is wrestling with his biography of the king, misses the hurly burly of life at the Foreign Office and is tempted to stand for Parliament as a Labour MP.

Meanwhile, Vera tangles with a randy Llewd George, accompanies Ginny to Sandwich where they meet Lytton Scratchy and Dora Barrington, and takes part in an indiscreet radio broadcast and a surprising séance.

The friends also embark on a trip to Venice, where they meet Dave Lollipop, his pneumatic German wife Frieda and man-eating American art connoisseur Peggy Googleheim.

What listeners say about Gloomsbury: Series 4

No Sound on Echo Spot

No playback sound when used on Echo Spot but works on laptop. Can Audible fix this?

I love Gloomsbury and was so excited that a fourth series had been produced, but the loss of one of the best characters from series 1-3 (Venus) was a disappointment. The story just wasn't as strong without her, and this series wasn't as funny as a result.

Not as good as the first three

I love Gloomsbury but this felt a little forced, it's still good but not quite up there was the others.

no sound on app